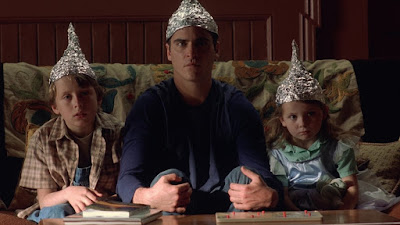 “I’m a miracle man. Those lights are a miracle.”

No matter which corner of the weird and wonderful world of cinephilia you happen to camp out in, mentioning the name “M. Night Shyamalan” probably comes with an equally complicated level of baggage. Many argue that the former Next Spielberg is a misunderstood visionary whose strengths as a genre filmmaker were unfairly corrupted by the mainstream Hollywood machine. Others maintain that he’s an overrated hack, a one-trick pony with an explosive ego and no real range. I’m not sure where I fall on that spectrum (likely somewhere in-between), but I have no trouble arguing that 2002’s Signs is the director’s most successful film to date, a quiet meditation on faith and coincidence that trades big-budget spectacle for low-fi simmer. Combining Tak Fujimoto’s intimate and often invasive cinematography with a frightening James Newton Howard score that evokes (among others) Bernard Herrmann’s work on Psycho, Shyamalan creates what a friend of mine once wisely referred to as our first truly post-9/11 movie — a shy and introverted piece about paranoia and conspiracy that plays on our worst fears about the dangerous world around us. 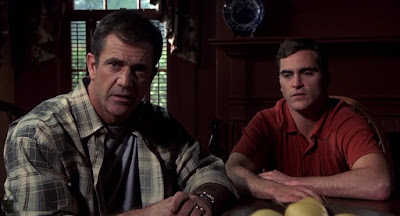 Though each of the four lead performances in Signs deserves praise (even Total Monster Mel Gibson has a few truly great moments), my favorite is easily Joaquin Phoenix’s Merrill Hess, the former minor league baseball star who moves in with his brother Graham (Gibson) to help care for the latter’s children (Abigail Breslin as Bo and Rory Culkin as Morgan) after his wife’s untimely death. Merrill is listless and bored, a little stir-crazy and very insecure. In a bigger town — a town with more than one main road and not quite as many cornfields — he’d be a ladies’ man. A star. He’d be going somewhere. But in rural Bucks County, Pennsylvania (which isn’t quite so rural in reality), he’s working at a gas station. Merrill, however, takes it in stride, and Phoenix plays him as carefully optimistic. He knows he deserves better, maybe, but he’s willing to sacrifice for his family. It’s a quality turn for a young actor whose eccentric public persona tends to distract from his considerable talent. But this was 2002, when Phoenix was an shiny up-and-comer only two years removed from Gladiator. He’s clean-cut and handsome, embodying the kind of wasted potential all too common in those outlying communities.

Anyway. Signs is a slow burn, and Merrill works hard to calm his niece and nephew’s paranoia about the so-called alien invaders during the film’s early segments. That practiced swagger is easy at first: rival ne’er-do-well Lionel Prichard (Michael Showalter) is clearly responsible for the strange crop circles on his brother’s property, and Merrill figures he can fix that with some tough talk and a little intimidation. He’d invite any opportunity to get his hands a bit dirty, really. In another timeline, he’d be the jock at the party who gets tuned up, punches a hippie, and leaves with the prettiest girl. With his brother grieving, though, Merrill sees it as his responsibility to provide a little optimism and security to the wounded family. But after a bizarre nighttime encounter with some high-jumping, fleet-footed chameleons – who, Merrill assures police officer Paski (the wonderful Cherry Jones) are definitely not Female Scandinavian Olympians – he starts to see things the kids’ way. Maybe the locals aren’t as dim-witted and incompetent as he’d let himself believe. Maybe the crop circles are a little too advanced for Lionel Prichard and the Wolfington brothers. Maybe this isn’t just all in the kids’ imaginations. 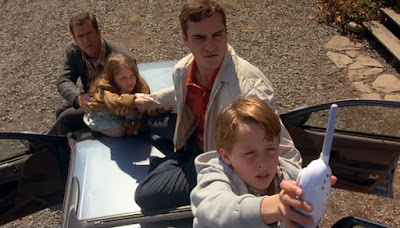 And it isn’t. One of the most enjoyable aspects of Signs is watching Merrill evolve from the skeptic to the believer, from the pouting Scully to the literal-tinfoil-hat-wearing Mulder. In a way, we need Merrill to believe in order to buy the whole “alien invasion” ourselves, and Phoenix’s nuanced and incredulous performance helps us transition from suspicion to belief and fleshes out Signs’ thematic agenda. Shyamalan isn’t really interested in the aliens, after all (hence the oft-repeated criticism that their allergy to water is some kind of plot hole; it isn’t. It’s just lazy story mechanics.), but he is interested in the way we cope with the immense trauma brought on by a worldwide event of this magnitude. The unbelieving Graham was counting on Merrill to help convince his kids to turn off the radio and forget this whole alien thing, but the younger man cannot hide his belief that those lights in the sky represent something greater than themselves, some kind of miracle or opportunity. This face-heel turn lands in one of the film’s funniest moments: when Graham insists that Morgan ignore the garbled feed from the upturned baby monitor, Merrill protests, “You’ll lose the signal!” 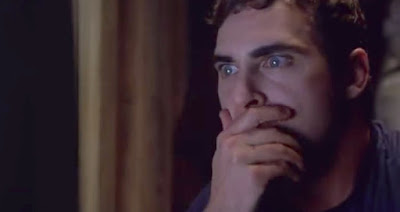 Merrill is hooked from there, and Phoenix’s childlike enthusiasm delightfully conveys the character’s long-awaited realization of purpose. He moves the television into the closet – just to prevent the kids from over-watching, he assures Graham – and maintains a careful vigil over the outside world. This diligent paranoia transforms his aloofness into a kind of dopey charm that Phoenix really embraces. Again, Signs is a deceptively funny film when it wants to be, and Phoenix’s comic timing is easily the best in the cast. My favorite beat comes after Gibson’s long monologue about the nature of fate and coincidence: Phoenix takes a minute, seemingly considering the existential ramifications of what his brother has just proposed, and then tells a silly story about gum, a paper cup, and Randa McKinney’s projectile vomit. It’s almost a non sequitur, a pure, human moment that helps cut through Shyamalan’s infamous tendency toward wooden, self-important staging. Though Merrill’s fun would soon give way to a showdown with a vengeful alien, his newfound understanding of the signs around him (and a reinvigorated faith in his own potential brought to life by Phoenix) gives him the strength to swing away.