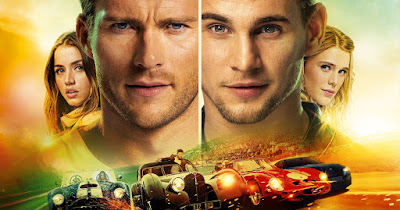 From the writers of 2 Fast 2 Furious and the balls of Clint Eastwood.

Overdrive (aka Euro2Fast Euro2Furious) looks, feels and sounds like a McG-directed pilot for a new Fox television series and…I’m stunned to say I kinda enjoyed it. It’s competent in a DTV way, with photogenic locales (Marseille and Paris), upbeat energy and some well-shot driving sequences. This long-in-development project from Pierre Morel (the director of Taken and From Paris with Love, who here is a producer) has all the earmarks of the usual French action thriller but feels a bit less strenuous than some of its predecessors. The film stars my second least favorite actor, Scott Eastwood, and Freddie Thorp (whose name is on the poster like that means something) as Andrew and Garrett Foster, half-brothers from another mother who became besties as teens and now work side by side as car thieves. Also part of their core team is Stephanie (Ana de Armas, who was very good recently in Blade Runner 2049), who is sort of a hacker but also Andrew’s girlfriend. Garrett doesn’t have a girlfriend, he’s the third wheel, but oh will he find love, don’t worry.

Overdrive is a movie where everything must fit like a puzzle. The brothers Foster steal a Bugatti from the wrong guy (Simon Abkarian, doing his best F. Murray Abraham), double crosses ensue and Andrew, Garrett, and Stephanie must assemble an enormous team to pull off a bold plan. I know it’s bold because after it SPOILER works END SPOILER, one of the secret allies says to Scott Eastwood: “That was a bold plan.” Eastwood replies “Fortune favors the bold,” as if it were his original expression. The ally smirks like “Yeah, that’s pretty good.” I can’t wait to drop my “When life hands you lemons…” on him. This movie is full of dumb sayings like that. They say “If you look around and you can’t see who the mark is, then it’s you” twice. Ugh! It’s disappointing dialogue from the geniuses that gave us “Pockets ain’t empty, cuz.” At least that was original. And why is there no stare and drive? 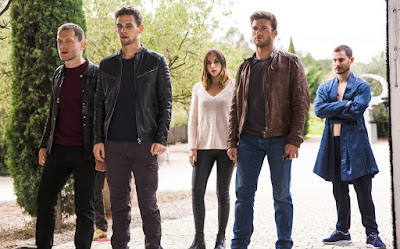 The cast is mostly likeable and that helps makes Overdrive enjoyable enough. This might be the best I’ve ever seen Scott Eastwood (he replaced Matthew Goode and Karl Urban in this oft-recast actioner) but he’s not anything better than average. He under-bruh’s his performance. Eastwood is a Califorinia-Hawaii guy in real life, so I’m disappointed he doesn’t have any of that bro swag that made Paul Walker so much fun in the Fast and the Furious series. Walker’s 1000% committed energy made Brian O’ Connor a loveable character, but Eastwood doesn’t have that sense of humor about himself. He’s still trying to be the cool guy and he’s not the cool guy. He’s got the cool guy look, but his voice is all wrong for the cool guy. He sounds like a punk, so when he’s barking threats or throwing shade at other characters (which he does a lot here, he’s always nagging), he sounds like a tough guy poser/whiner. He reminds me a lot of the “face” guys we used to let into Sigma Pi because we thought he’d bring girls to the frat parties but then we regretted it because we had to live with him and he was all unearned cockiness.

Quick digression: back in the day, one of those guys was in my room at a frat party with me and two women and he said something really fucking stupid and sexist. The women looked at me like “Ummmm…” Sensing the room turned against him, he decided to take his shirt off like that would save the situation. It did not. He ruined my evening. That’s Scott Eastwood. Little Nobody’s co-star, Freddie Thorp, fares better. At first I thought he was a sentient leather jacket with a British accent (there are so many people wearing leather jackets in this movie…also spiky hair), but he wore me down with his normalness. He just seems like a nice dude. It’s weird because he’s just being a guy and manages to outcool the cool guy. Ana de Armas is wasted as the girlfriend. Bummer. She can do more. 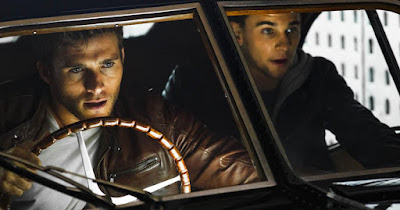 The movie has its share of dumb moments I enjoyed. Among them are the team that Eastwood, Thorp and de Armas assemble is so large (there’s over a dozen people) that we don’t even meet some of them. They are never introduced by name, and in some cases we don’t see their faces. They are just…assembled. When the requisite “You all ready for this?” scene happens and there’s a shot of all of them, I was like “Wait…you were concerned about who to trust a few minutes ago and now you’re going to trust every hip millennial in France with this caper?” Thorp also has a line at one point when he’s giving the Foster credentials to a crime lord where he says they’ve done work/are known on “all five continents.” Ummmm. Like, did something happen and there’s not seven anymore? His character eventually gets a girlfriend in the movie, too, and the scene where she woos him is funny because he’s not interested and then only becomes interested because she says she drives his bucket list car every Sunday. Then he wants to bang. Good for her? Finally, this movie has the balls to bring back “How You Like Me Now?” by The Heavy, a wet ear fart of a song that I thought I successfully suppressed after hearing for years in Community, The Fighter, Horrible Bosses, This Means War, G.I. Joe: Retaliation, Horrible Bosses 2 (WTF) and Grudge Match. 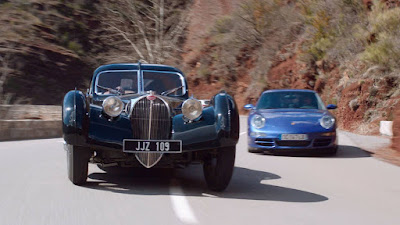 If you would have told me entering 2017 that I would prefer Overdrive over The Fate of the Furious, I would have thought you were crazy but here we are.