Off the Shelf: THE CHURCH (Blu-ray) 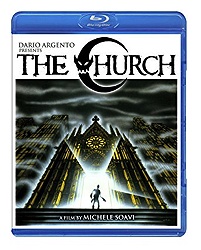 I have a hard time picking a favorite Michele Soavi film, but this might be it.

Michele Soavi's The Church, the third in a line of Italian horror Blu-ray releases from Scorpion and Doppelganger Releasing (a deal that also produced Blu-rays of Soavi's The Sect and Dario Argento's Opera), is among his very best films. I'd have to watch all three in a row to make a final determination, but it's a toss-up between this, Stagefright and Cemetery Man for my favorite of his movies, and since the latter two tend to get most of the accolades, allow me to sing the praises of The Church for a minute. 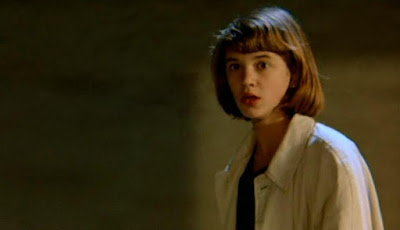 Originally conceived as Demons 3 (the sequel to the two Lamberto Bava films), The Church begins in medieval Germany, as a group of knights bury some devil worshippers and build a church over them to keep the evil at bay. Fast forward to present day (1989); the church's newly hired librarian (played by Tomas Arana, who would work with Soavi again on The Sect) gets curious while exploring and breaks open the seal that's existed for hundreds of years, thereby releasing the evil spirits while a bunch of people -- including a wedding party -- are all trapped inside.

Of all the Soavi films I've seen, The Church has the slowest burn. Plenty of cool, gory stuff happens during the first two thirds, but they're mostly isolated incidents -- signs of the really bad shit still to come. But it's all a long buildup to a crazy climax, one for which I know not all horror fans will have the patience. His other movies like Cemetery Man and Stagefright do a better job of spreading their pleasures out. The Church rewards our patience. In doing so, it's able to build a ghoulish sense of dread throughout most of its running time, teasing us with messed up moments of gore and violence that are just awful enough to make us feel genuinely uneasy about what's to come. If all this bad shit is happening already, how nasty is it going to get once the demons are let loose on a church full of people? And will that woman ever get her wedding veil out of the door? It's touches like this that help The Church tap into a real nightmare state before cutting loose not with violence, necessarily, but with surrealism and goo. 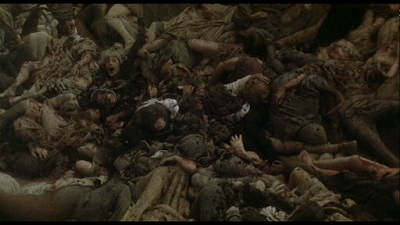 Having never picked up the Blue Underground DVD of the movie, I'm excited to finally own The Church on Blu-ray. Like each of Doppelganger's recent Italian titles, this one is slated for a super special edition some time later this year. In addition to a brand new HD transfer of the film taken from a 2K scan, there are new interviews with both Soavi and Asia Argento, who was just a kid when the movie was made and has a major (dual?) role. The special edition, which does not yet have a firm release date, will contain a number of additional interviews and a commentary with star Barbara Cupisti and moderator Nathaniel Thompson, as well as custom cover art. Weigh this information in your decision of whether or not you buy this edition or hold off for the deluxe Blu-ray. Personally, I'm good with this one. 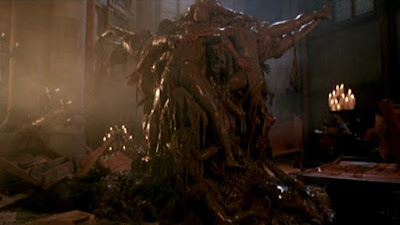 I've said it before and I'll say it again: of all the Italian masters of horror, I wish Michele Soavi had made more films. Stagefright is a slasher that's gorgeously executed, The Sect is a mixed bag, Cemetery Man proves he can do weird and romantic. It's The Church, though, that gets me most excited about Soavi as a filmmaker, even if it's not as focused and polished a film as some of his others. I like the tone he establishes here more than in his other work, and the best moments in The Church are, for me, the best stuff he did. If it had been a Demons sequel as originally planned, it would have been my favorite of them.

Posted by Patrick Bromley at 12:02 PM