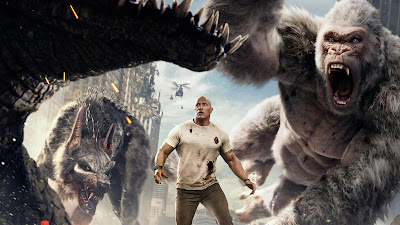 This movie does everyone dirty.

The new movie Rampage can be categorized in a lot of ways: the latest attempt to convert a popular and long-running video game into a film; the latest vehicle for Dwayne "The Rock" Johnson; further evidence of Summer Movie Creep, in which big-budget blockbusters are released further and further outside the summer months until the entire calendar year is filled up with junk like Rampage. I would call it what I recently referred to as a time capsule movie for all the ways in which it represents the worst of what Hollywood is currently capable, but that suggests I will remember Rampage by the time I finish writing this review. That's un-fucking-likely. 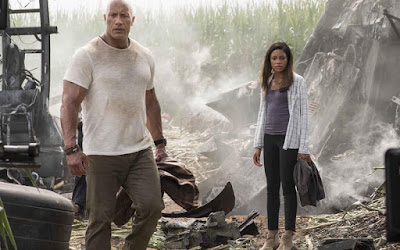 Dwayne Johnson plays Davis Okoye, former special forces and anti-poaching soldier-turned-primatologist whose best friend is an albino gorilla named George (played by a shit-ton of pixels and the motion capture performance of Jason Liles). One day, a canister of a militarized pathogen created by Energyne as part of their CRISPR research lands in the wildlife preserve and explodes in George's face. The gorilla immediately begins to mutate, becoming enormous and aggressive and attracting the attention of Dr. Kate Caldwell (Naomie Harris), a former Energyne scientist who developed the pathogen as part of her CRISPR research, and Agent Harvey Russell (Jeffrey Dean Morgan), a government agent working for an unspecified shadow organization. George breaks out of his enclosure and begins heading for Chicago, where Energyne CEO Claire Wyden (Malin Akerman) and her brother Brett (Jake Lacy) have called him by putting out a signal using modified bat sonar as part of their CRISPR research. Claire Wyden and her brother Brett want to use the mutated George -- as well as an enormous mutated wolf (which "internet weirdos are calling Ralph!"*) -- as part of their CRISPR research to create various mutated species and strains of DNA that can be weaponized for military applications. It's up to Davis Okoye, Dr. Kate Caldwell, and Special Agent Harvey Russell to track George all the way to Chicago to try to find the antidote that will cure him somewhere in the Energyne facilities, as well as protect the city from the impending attack by George, Ralph, and a mutated alligator that is also heading to Chicago underwater but is mostly kept a secret for the majority of the movie's running time.

If you read my reviews very often, you might already know that I don't spend a lot of time recapping a movie's plot. This is because a) I don't want to give away any more than I need to and b) the plot is almost always the least interesting aspect of a movie for me to discuss. You might also notice that I just spent a great deal of time explaining the plot of Rampage in pretty specific detail. This is because typing out the film's plot is practically akin to reviewing it, as just reading the summary should be more than enough evidence of just how fucking stupid this movie is. Energyne. CRISPR. (Yes, CRISPR is a thing. It's just not a thing that should be talked about so much in a movie about monsters attacking Chicago.) Davis Okoye. Energyne. What's so goddamn galling about the movie's screenplay is that it's credited to no fewer than four writers, which means it probably passed through the hands of at least 20 different screenwriters during its development. This is the best they could come up with. 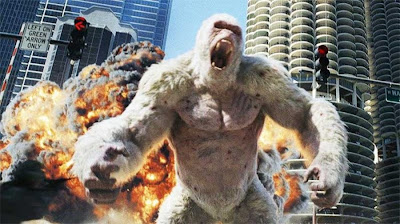 Everyone is let down and done dirty by Rampage. Dwayne Johnson is fine, I guess, but saddled with a role that his exposes him for having one trick and a willingness to appear in big, noisy shit so long as he gets a cool name and a leather jacket. The fact that his character has to have multiple backstories and occupations -- special forces and anti-poacher and gorilla expert -- is proof of just how hacky this screenplay is. Every single other person in the film comes off terribly. Naomie Harris is a great, Oscar-nominated actress who is insanely charming as Moneypenny and a badass in 28 Days Later and Miami Vice, but here has to keep saying the word "Energyne" with a straight face. The thought of her reading this dialogue and knowing she was going to have to try to sell while cameras were rolling was making me sad every minute she was on screen. Jeffrey Dean Morgan, once a promising leading man in The Losers, goes full Negan here -- all bullshit Southern drawl and hammy overacting and a stupid cowboy gun tucked into his pants so he can be cooler than the average special agent. Malin Akerman and Jake Lacy are the bad hair twins and have the worst scenes in the movie. Joe Manganiello shows up and shouldn't. The movie opens with Marley Shelton, playing a part she's both too famous and too talented to play but Hollywood has done her dirty. Fuck, everything in this movie depressed me. 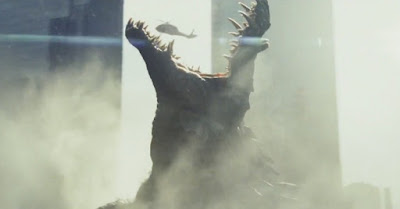 Rampage was probably doomed from the start when its endless series of screenwriters and rewrites decided that it should be the story of The Rock and his gorilla friend. Turning it into a star vehicle with a lovable CG animal that can be merchandised hobbles the story, requiring the whole thing to be reverse engineered to make that work. Corporate conspiracies and lady scientists and government agencies have to be added so that the pieces fit -- which is to say that the pieces don't fit and the movie is barely functional. There is an obvious way to adapt Rampage for a movie: use the '70s disaster movie model, only the disaster is the arrival of three giant monsters. Somehow Independence Day knew enough to use this template back in 1996, but the current model depends too greatly on a single marketable face to sell a movie (even San Andreas pulled this shit, and that's literally a disaster movie). There's no trust in the potential of a slightly less-famous ensemble of actors to carry a movie that ought to really be sold on giant monsters attacking a city, but even that would require that director Brad Peyton show any interest in staging moments -- visual and story beats that stand out and provide enough of a clothesline upon which to hang the rest of the less-interesting expository details or underdeveloped characters. We remember the "Atomic kiss" from Godzilla or the White House blowing up in Independence Day because they are moments. Rampage doesn't have a single moment I can recall, and I saw the thing less than 12 hours ago.

Three quarters of the film are spent building up to the big destruction sequence, which means you really aren't getting what you paid for -- giant monsters attacking -- until the last act of the movie. When it does finally happen, there almost no joy to be had because Peyton fails to present the images in a way that's at all interesting. Again, there are no moments. Chicago gets fucked up real good, so...yay? (I can see me die from here!) It's all ugly visual noise: indecipherable grey rubble rendered on a computer, cut together with actors performing against obvious green screens, the lighting too bright and unnatural, the frame utterly flat. The truth of the movie is that it doesn't have to be giant monsters destroying the city at all. It could be anything. Robots, big alien worms, sentient Gladware -- it makes no fucking difference. This isn't a movie that has any affection or any wonder towards its monsters.They're in here because they're in the video game on which it's based. As someone who loves movie monsters of all sizes, the cynicism here is pretty disheartening. 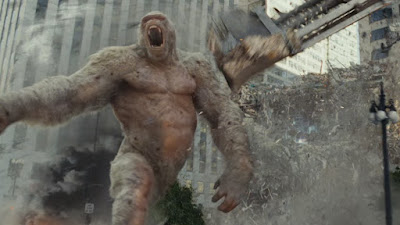 Surely I will be challenged and mocked for not "turning off my brain" and enjoying Rampage as a "fun" "popcorn movie" that delivers "exactly what it's supposed to." I resent the implication that just because I love monster movies, I should be happy with Rampage because it has giant monsters. This is why I was attacked for disliking Jurassic World and Alien: Covenant and The Mummy. As a monster kid, I'm supposed to just accept shit like this. I can't. I would first and foremost like Rampage because it's a good movie. Barring that, I could at least enjoy it if the monster stuff was fun. None of this is the case. Rampage is a big expensive nothing.

*Line of dialogue in this movie
Posted by Patrick Bromley at 5:00 AM