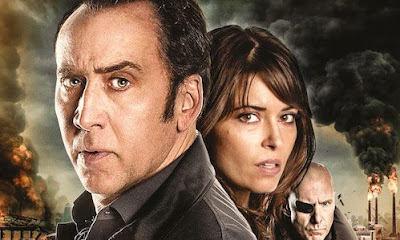 What if Logan was boring?

The Humanity Bureau opens on a cold, oppressive, monolithic cityscape reminiscent of Dredd or Escape from New York. This place — a walled refugee stronghold known as New Eden — is the last hope of an American population whose apathy toward reckless industrial corruption and selfish political gamesmanship has caused widespread famine and disease. The once-great USA has been reduced to a few scattered settlements like this one, a kind of cosmic punishment for our hubris and headstrong bullying of the rest of the world. Though tired and desperate, the citizens of New Eden hold firmly to the belief that a great American rebirth is within their grasp; they need only uncover the unbridled potential lying dormant in the souls of their children. They need only light a spark, a small whisper of hope that will give way to a defiant cry toward the very heavens that abandoned them so long ago. 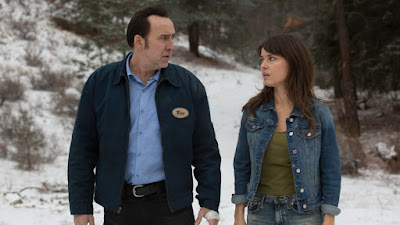 I’m just messing with you. The Humanity Bureau opens on Nicolas Cage steering a fake El Camino against a goofy green-screened desert backdrop. He looks like a little boy playing an arcade game, and the frame around him is so laughably synthetic it might as well be Sin City. However, since we at Redboxing are not here to dunk on bad special effects, let’s follow Cage’s Agent Noah Kross beyond the desert to his final destination, a motel room occupied by a character I’m going to call Crazy Eyes. As an agent in the Humanity Bureau, it’s Kross’ job to interview Crazy Eyes and determine his Productivity Rating. If the number is high enough, he’ll be allowed to stay on his property. If not, he’ll be deported to New Eden — which, as it turns out, is less Humanity’s Last Hope and more A Bad Place for Bad People That Might Not Even Exist (think “the colonies” from The Handmaid’s Tale). Crazy Eyes — a flag-waving, MAGA-minded patriot — refuses to come quietly, forcing Kross to end him.

So it goes. Though Kross is a top agent, his partner (and superior?) Adam Westinghouse (Hugh Dillon) is sensing a decline in his resolve. His fears are confirmed when Kross gives the enigmatic Rachel Weller and her son, Lucas (Sarah Lind and Jakob Davies) a seemingly unwarranted deferral on their inevitable deportation. When Westinghouse intervenes, Kross abandons his post and shuttles the pair north in hopes of settling his new family in the lakeside paradise of his youth. Desperate to understand his friend’s actions, Westinghouse (now awesomely eye-patched after an encounter with Lucas’ BB gun) discovers that a government mole named Ravetch (David Lovgren) has shown Kross the secret truth about New Eden and that Rachel may not be the person she claims to be. Meanwhile, Kross and Co. brave starvation, killer robot drones, and radioactive mountain men on their way to freedom beyond the border.

Reading this back makes The Humanity Bureau sound like a complex dystopian thriller, and there’s something very Logan and Terminator 2: Judgment Day about the whole “makeshift family hitting the road toward an uncertain future” premise (they even swap out the El Camino for a paneled station wagon). But in spite of the high concept, it’s a bland and lifeless story with very little character drama or political intent. The Bureau itself seems vaguely Randian in its conception — likely parroting an agency talking point, Kross remarks early-on that a socialized liberal democracy works in theory but not in practice — but aside from a very general “anti-holocaust” message (which, to be fair, is actually a worthwhile statement to make in 2018), the movie doesn’t seem all that interested in politics. Westinghouse even remarks about halfway through that he and the Bureau are “on the wrong side of history,” but then continues playing the bad guy all the same. The movie is full of bizarre tonal and structural contradictions like these. 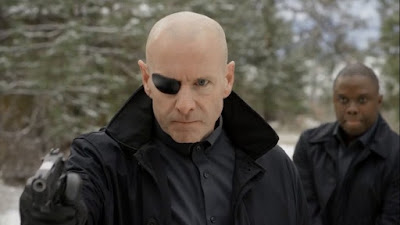 But The Humanity Bureau isn’t without its tiny joys. Hugh Dillon plays Westinghouse like a villain’s villain; he’s seething and sinister in an over-the-top way that makes the movie’s low-budget kitschy quality that much more charming. It’s hard to tell if one key scene set at a swimming pool — ostensibly the classic archetypal scene in which the henchman tells the villain something that upsets him — is meant to play serious when Westinghouse starts splashing his henchman with water and inviting him for a swim. “I come here every month,” he says, “even when I don’t want to. It’s a timeshare. You’d hate me if you knew how expensive it was.” We’re immediately scanning the henchman’s face for a clue on how to react to this non sequitur, but he doesn’t seem to know, either. For more Westinghouse fun, scrub to his elevator scene with Ravetch. The pair have a close-up alpha male Act Off for the ages that I want played on a loop at my funeral. Backing Dillon up in the cheese department is Kurt Max Runte as mountain dweller Adolf Schroder, a kindly German ex-pat who helps Kross and Co. on their journey. 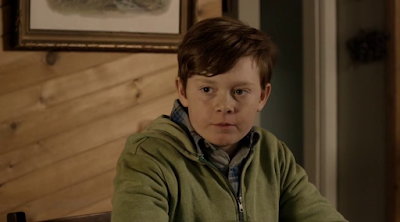 The Humanity Bureau is cheap and dull, but it’s fairly harmless. Cage is bored and the kid is overdoing it. You get the gist. The only truly offensive moment comes during the late-game reveal of New Eden’s secret purpose: Flashing back to an earlier scene played on the back of Cage’s head, the movie has the balls to insert a new line of dialogue that wasn’t there the first time. It’s a fucking bonkers and frustrating move that proves how out of its depth The Humanity Bureau is when it tries to tell an actual story. Either director Rob King and screenwriter Dave Schultz backed themselves into a narrative corner and had to make do in the editing room, they genuinely thought it was a powerful stylistic decision, or they simply didn’t know or care if we’d catch the inconsistency. No matter the rationale, it’s a bad, bad choice. Shoddy filmmakers aren’t going to get any better by not playing fair with the audience. See? I was perfectly willing to let The Humanity Bureau off with a warning. Now I’m mad.
Posted by Patrick Bromley at 5:00 AM