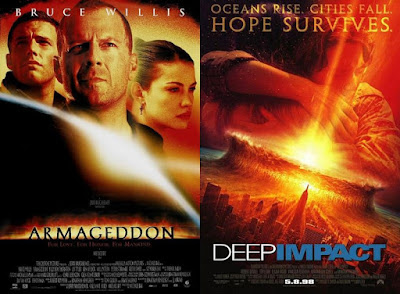 Adam: Mark, were these repeat viewings for you or first-time watches? If repeats, did your opinion of Armageddon or Deep Impact change in the 20 years since their release?

Mark: It was my very first viewing of Deep Impact, actually, but this was maybe the tenth time I’ve seen Armageddon, which feels like the movie du jour for all of my hotel stays or transcontinental flights. It’s been a spell since the last time I’ve seen it, so I was secretly hoping that my impressions might change a little, especially in comparing it with Deep Impact.

All that said, my impression didn’t change at all. Armageddon is big, loud, and dumb, and I mean dumb in the best way possible. It’s definitely having a good time, with quick cuts, snappy dialogue, and saturated colors; it’s trying to elevate a science fiction story into a tall tale. Any impressions change for you? 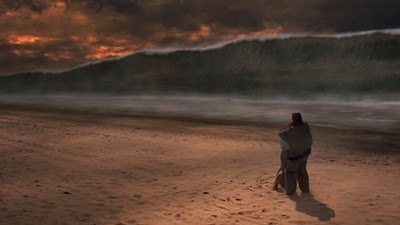 Adam: It’s funny you mention Armageddon being an airplane movie for you, because the only time I had seen Deep Impact prior to this week was during a flight back in 1998. It’s not the ideal way to see that movie. Revisiting both films was fun. I was a much bigger fan of Deep Impact this time around. I like how seriously they take the situation. For me, the most interesting way to tell a story about an extinction level event is to hone in on personal relationships and not the global operation. Movies like Last Night (1998) and Seeking a Friend for the End of the World have done this very well, too. It’s a dramatic slam dunk. I have to say I was pretty moved by Deep Impact, even with it feeling just as much like a great NBC mini-series as it does a big-budget summer blockbuster. I think much of that has to do with half of the cast being TV veterans (Tea Leoni, Ron Eldard, Laura Innes, Mary McCormack, Richard Schiff, Blair Underwood) and the director, Mimi Leder, spending most of her career directing television shows like ER. The movie has a Peacock Network vibe.

My impression of Armageddon didn’t change much. I’ve never been fully on board with this movie. Back in 1998, I was disappointed that it wasn’t as good as Michael Bay’s previous films, The Rock and Bad Boys (okay, maybe it’s as good as Bad Boys). You’re right in saying that Armageddon is big, loud and dumb. If Armageddon wasn’t as sappy as it is (that’s my favorite stuff in the movie, but we’ll get to that later), it would be insufferable for me. Armageddon gives me a headache and I’m not saying that to be cute. I don’t think there’s been a single time I’ve watched it without my head actually hurting. It’s probably due to the on-average 1.5 seconds between edits.

Do you think Armageddon works as a Bruce Willis movie or just as a disaster movie? 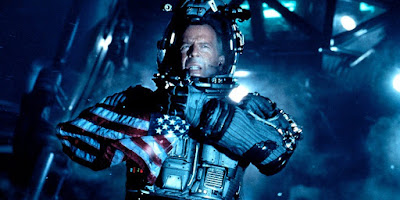 Mark: When I think back to it, Willis, Ben Affleck/Liv Tyler, and Billy Bob Thornton all loom equally large as the voices of the story. It’s more like a movie that has Bruce Willis in it, rather than being a Bruce Willis movie, so to speak. And, I generally think those characters work as parts of the story, simplistic as they are, but I don’t think that Armageddon is necessarily a disaster movie. It’s more of an adventure movie, mostly because we don’t feel the stakes of it enough. Deep Impact gives us a taste of the danger of the disaster beforehand, but Armageddon mostly avoids that in exchange for a heightened sense of adventure.

Regarding Deep Impact, I like that it takes the situation seriously (because not every movie does that), but it’s so earnest in its stakes that it kind of bummed me out. It’s a pretty humorless run all the way through, and it’s so committed to being realistic with its premise that I was sad at the end. Which is good, because it means the movie worked. But, I don’t need to watch it again any time soon, whereas the ridiculousness of Armageddon makes it easier to rewatch.

You’ve sort of touched upon this, but who do you think is the heart of each of the movies?

Adam: In Deep Impact, it’s probably Tea Leoni and Robert Duvall. I think back to Leoni giving up her seat in the underground ark to Laura Innes (I like how their beef with each other is done with gestures/glares and not dialogue) and also Duvall when he’s reading Moby Dick to a now-blinded Ron Eldard as a way to care for him in their last days. It’s not Elijah Wood, even though I think he would want me to say the answer is him. The only time I laughed during Deep Impact was unintentionally because Wood basically holds Leelee Sobieski survival as a bargaining chip to marry him. That’s some bullshit leverage right there. I so wished she heard his offer and was like “I’m sorry. I’d rather die single.” 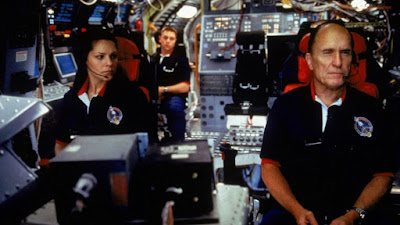 With Armageddon, it’s Bruce Willis. It's that classic “tough guy is really a softie underneath” thing. Even though I am not the biggest Armageddon fan, I do like how emotional the ending is between Willis, Ben Affleck, and Liv Tyler. I fall for it every time. I’m also a fan of Will Patton’s performance, which is the only personality of Willis’ drill crew that seems to have existed before the events of this movie. And how can I not mention Aerosmith’s anthem “I Don’t Want to Miss a Thing”? I know it’s cheeseball, but I love that song with every fiber of my being. It’s beautiful. Do you like it Mark? Also, why do you think Michael Bay stepped away from schmaltz like in Armageddon and Pearl Harbor? Do you think he was pretending to be sensitive or he felt so burned by the reception of Pearl Harbor that he said “To hell with it. I’m 100% bro-code now.”

Mark: Will Patton is great, and brings some much needed sympathy. For Deep Impact, I also liked the moment that Tea Leoni has with her character’s mother and father. I like “I Don’t Want to Miss a Thing” better now than when it came out; it captures the goofy, cheesy tone of the emotional stuff in Armageddon. As for Michael Bay, I don’t know if it’s the backlash about Pearl Harbor as much as he sort of got bored with this particular kind of stuff. He went and did a sequel (Bad Boys II) and dabbled in sci-fi (The Island) before going headfirst into the more controllable environment of Transformers movies. Bay’s always been about the biggest scope possible, and what’s bigger than outer space robots? (I don’t actually want that answered.) What’s something that shouldn’t have worked in both movies, but does?

Adam: That’s an interesting question, but first I want to say that I love The Island. Between that movie and Bad Boys II, Michael Bay perfected the freeway vehicular mayhem action sequence. To answer your question, for Deep Impact, I’ll say that it does a great job of convincing you of the scope of the crisis despite having more restrained special effects budget than Armageddon. In the latter film, I didn’t really get a sense that an impending asteroid collision was of too much concern even to NASA. Bruce Willis makes a statement at one point that he cannot believe the U.S. Government doesn’t have contingency plans for an event like this and I agree with him. NASA handles this about as professionally as when your boss tells you at 3pm he needs something done by 5pm.

What I think surprisingly works in Armageddon is how moving the finale turns out to be. This is a movie that doesn’t seem to lead up to that emotional catharsis and yet somehow sneakily earns it by the end credits. It must have been doing something right that I can’t put my finger on, because I’m so distracted during the first two acts by the annoyances of Armageddon like the 1000th Peter Stormare performance of this type or every single possible thing being a last-second emergency no matter how big or small. For a person like me who wants to avoid conflict in real life, the amount of it in Armageddon (interpersonal and situational) provides me with little entertainment. I get you need conflict in movies, but the extent of it in Armageddon is more than necessary.

Mark: What’s your favorite part of each movie?

Adam: In Deep Impact, it’s a trio of performances: Robert Duvall, Tea Leoni and Morgan Freeman. Duvall is an actor that used annoy me (he acts so naturally that it feels like he’s not trying) but now that’s what I enjoy about his work. I think this is possibly the best I’ve ever seen Tea Leoni. I love that she underplays everything.

My favorite part of Armageddon is the Aerosmith song and Liv Tyler’s adorableness. 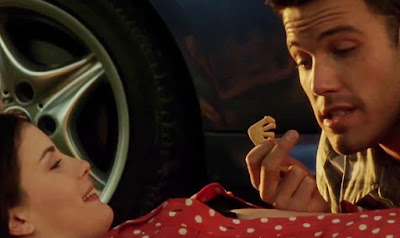 Mark: I think my favorite part in Deep Impact is how much of the story is about journalism (full disclosure: Adam and I called this movie Comet Journalism in our texts); we spend a lot of time seeking out stories, in news briefs, and with reporters. It drives that realistic angle to the story. I agree with you about Liv Tyler; as ridiculous as it might be to say it in a Michael Bay movie, she radiates warmth and humanity.

Adam: To close out, what do you think the past 20 years have done for these films? Are they remembered fondly or forgotten?

Mark: Deep Impact seems to have disappeared from everyone’s memory, unless it’s in conjunction or comparison to Armageddon, like an answer to the trivia question of “what are two of the same kind of movie that came out in the same year?” and then you talk about White House Down and Olympus Has Fallen, and Jobs and Steve Jobs, among other things.

Mark: I think that the idea of this particular disaster movie is good, because nobody has really made an asteroid hitting the earth movie since then, which perhaps means that these two movies are the definitive statement for this subgenre? What you mentioned about the TV-movie nature of Deep Impact hurts its longevity and cultural imprint, while Armageddon gets more remembered because of its rewatchability. They’re not overrated or underrated, but properly rated.

Adam: These movies are weird. I just admitted I much prefer Deep Impact, but if you asked me right now I would still rather watch Armageddon again.

Sound off in the comments! Which of these two films do you prefer? If you could only take Deep Impact/Armageddon or Dante’s Peak/Volcano with you on a desert island, which would you choose?
Posted by Patrick Bromley at 12:00 PM