Celebrate Junesploitation’s “Day at the Beach” with the best movie of the entire Beach Party franchise!

Because that’s just the kind of difficult work we do here at F This Movie!. What is the best beach party movie? Why, Bikini Beach. How many angels can dance on the head of a pin? Multitudes. 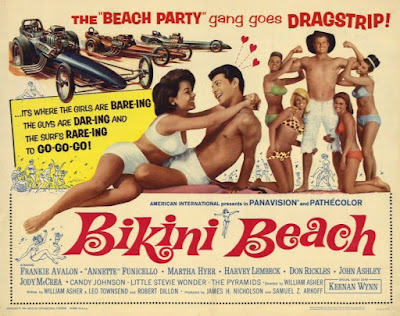 Most movie series tend to experience a lag around about the third installment. The opposite is true of Bikini Beach; it’s as if the previous Muscle Beach Party was a step in the wrong direction and Bikini Beach was a course correction. You know, kind of like From Russia With Love and Goldfinger in the James Bond pictures. Although many people consider these lightweight romps interchangeable, there is a discernable difference between above-par beach party (APBP) and below-par beach party (BPBP).

Bikini Beach has the best guest stars. Yes, I am sad that Buster Keaton missed this outing, but the inclusion of Boris Karloff more than makes up for that. Jody McCrea, Candy Johnson, John Ashley, Donna Loren, Don Rickles, Timothy Carey, and Harvey Lembeck all return from previous installments; Bikini Beach even ups the ante by throwing in Little Stevie Wonder. 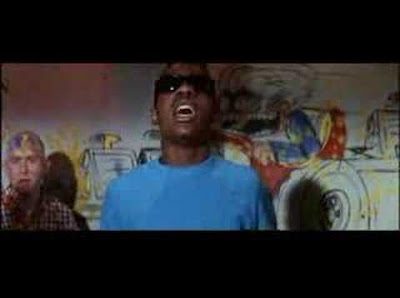 Bikini Beach is the longest of the beach party movies at 100 minutes, so there is more to love. When the Walt Disney Company, which had Annette Funicello under contract, loaned her to American-International for the beach pictures, Walt Disney famously asked Annette to wear a one-piece bathing suit and NOT expose her navel. Bikini Beach has the distinction of featuring the longest uninterrupted shots of Funicello’s belly button in the entire series… if you are into that sort of thing.

Beach Party has the best songs, and certainly the best subplot. The subplot I speak of involves a visitor to the beach, one Peter Royce Jones, an English musician better known as “Potato Bug,” played by Frankie Avalon. The filmmakers here are clearly lampooning Beatlemania and the British Invasion of 1964, but something strange happens in the process. Although they are meant as parody, the Potato Bug numbers are the best ones in the picture, full of energy and joy. One number in particular, “How About That,” features real choreography that is a step above the usual somnambulant “stroll along the beach and sing a ballad” set-up of many of the musical numbers in these films. The filmmakers even go the extra step of hiring a convincing double to wear the Potato Bug get-up, so Frankie Avalon can share the screen with his alter-ego without the use of ham-fisted split screens or optical effects. The double simply lip syncs to the track recorded by Avalon; it’s effectively a duet between Avalon and himself. They even bump heads at the end. It’s the coolest; take a look:

But there is something else going on here that we can see with the benefit of hindsight. First of all, we get to see the standard reaction of many people to the Beatles in 1964. The Potato Bug songs are full of extraneous “Wooooo’s” and “Yeah Yeahs” and not much else, but they are still fun in spite of themselves.

Second, it was the British Invasion that effectively ended the reign of teen idols like Frankie Avalon on the pop charts, so Avalon is unwittingly lampooning the phenomenon that ended his teen idol career.* The irony is that in his portrayal of the Potato Bug, Avalon shows so much spark and a talent for comedy that the rest of the beach party movies barely exploited. Usually Frankie Avalon was like the Marilyn Munster of the series—a glass of lukewarm water served alongside a feast of crazy hijinks and colorful characters. He is the Zeppo of the Beach Party movies.

THIS JUST IN AND IT WILL BLOW YOUR MIND: In a 2004 FilmFax magazine interview, director William Asher revealed that the actual Beatles were slated to appear in Bikini Beach, but their popularity following their four-weeks-in-a-row appearances on the Ed Sullivan Show in February of 1964 priced them out of American-International’s budget. The script was then hastily rewritten to include the Potato Bug character in place of the real Beatles. Imagine if this had actually happened! The Beatles would have been like Captain Geech and the Shrimp-Shack Shooters, the fictitious band played by the fictitious band The Wonders in the fictitious beach party movie Weekend at Party Pier in Tom Hank’s delightful That Thing You Do!

* Actually, Frankie Avalon’s career is far from over. He still tours and often hawks his Limoncello and Tiramisu cakes on In the Kitchen With David, my favorite show on QVC. #foodie4life #scrubdaddy #spurtle #temp-tations 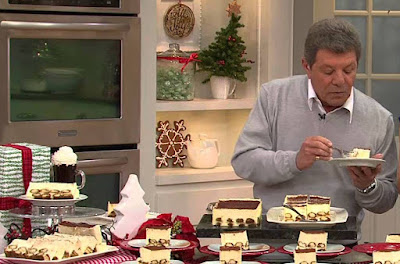 THRILLS: 75%
(Thrilling that a paper-thin premise could support this many installments.)

CHILLS: 75%
(I get chills just thinking about beach party movies. No, really—they were all filmed in the winter with the cast only pretending it was hot outside.)

SPILLS: 75%
(Lots of fun stunts, especially during the film’s go-cart race finale)
Posted by Patrick Bromley at 5:00 AM