“By train, by plane, by the edge of your seat--it’s the most hilarious suspense ride of your life!”

At its core, Silver Streak is a murder mystery set on a train, following in the grand tradition of Agatha Christie’s Murder on the Orient Express, complete with interesting characters who are rarely what they seem. But it’s also a Hitchcockian suspense/thriller in which a man is wrongly accused of a murder he didn’t commit. And yet, it’s also a genuine and sweet love story about two people who find themselves surrounded by extraordinary circumstances. Lastly, it’s a buddy comedy featuring characters who couldn’t be more different, but somehow keep ending up together again. Each of these story directions would have made for a satisfying film on its own, but throwing them all together in a blender makes something entirely unique. One of the things I admire and appreciate about Silver Streak is that it keep reinventing itself, never content to be just one thing.

Most of the credit for the success of this movie goes to Gene Wilder, hot off his earlier seventies successes Willy Wonka & the Chocolate Factory, Blazing Saddles, and Young Frankenstein. In this film, he gets to display his dramatic acting chops, playing up comedy in certain situations, but also somehow being completely vulnerable and sincere at all times. There is a sweetness inherent in Wilder, a gentleness that makes him not only relatable, but endearing and lovable in a way that is uncommon among leading performers. There are many times in this movie where I want to give Wilder a hug because…well, because he’s Gene Wilder. Who better to portray an innocent man wanted for murder and trying to stay one step ahead of his pursuers than Willy Wonka himself? 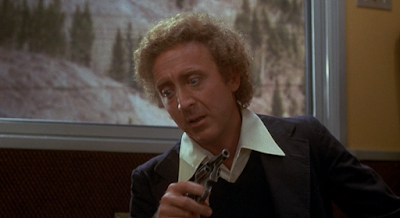 This brings us to the romantic angle of the film. Wilder’s character is traveling on a “silver streak” train from Los Angeles to Chicago, and all he wants is to use the long journey to relax and disconnect. He’s not looking for romance, and tells a fellow passenger (played by Ned Beatty) as much. Yet romance finds him anyway when he’s caught in the orbit of a woman named Hilly, played by Oscar-nominated actress Jill Clayburgh (for 1978’s An Unmarried Woman). The romance that develops between these two is believable and sweet, and it feels like there’s real chemistry. Again, I credit Wilder for being so sincere and lovable, how could any woman not fall for him?

Perhaps most importantly, Silver Streak is, of course, the first collaboration between Gene Wilder and Richard Pryor. The two would become one of cinema’s most loved comedic duos, appearing in three more films together over the next 15 years. It’s surprising to realize that Pryor doesn’t make his entrance until over an hour into the film, and everything changes when he does. What had been a fairly earnest Hitchcock film with a funny, lovable, unconventional leading man becomes a ballsy buddy comedy with Wilder and Pryor playing up their differences for maximum effect. 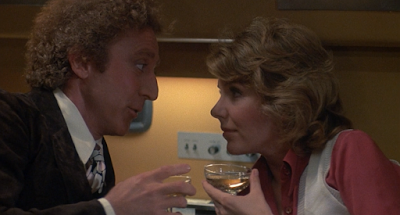 It’s not long after we first meet Pryor’s character that he and Wilder end up in a train station (this movie frequently leaves the setting of the train) with Pryor applying shoe polish to Wilder to put him in blackface. The single biggest hallmark of the movies I’ve written about during my series on the movies of 1976 is how often tonal whiplash occurs, where a movie slams on the brakes and suddenly takes a complete left turn. By the time we’re in that bathroom with Pryor trying (and failing) to teach Wilder how to “be black,” we aren’t even in the same movie that we started.

This scene is shocking by modern standards, and of course I can’t imagine it would ever make it into the final cut of a movie today, but maybe I’m wrong, especially post-Get Out. But I also think that it was also deliberately shocking in 1976, even if it was played for laughs. This bit was originally conceived differently, with Wilder successfully passing as black, but Pryor fought for the scene to be rewritten so that no one is convinced by Wilder’s act. In fact, he fought so hard for the scene that he ended up walking off the set until it was agreed to be done his way. While I don’t think any director dreams of their actors walking off set, I admire Richard Pryor so much for sticking to his guns on this, because I absolutely think he was right. To have the scene play differently simply doesn’t work and carries no truth. The comedy isn’t in Wilder “being black.” What’s really funny about the scene is that Wilder is trying to be something he isn’t, and is, of course, failing. Pryor was such a pioneer in so many different ways. There are only a couple of racially charged scenes in the film, but they stand pretty tall and have a lot to say. It’s kind of surprising to realize that Silver Streak explores some important issues, even if by accident. 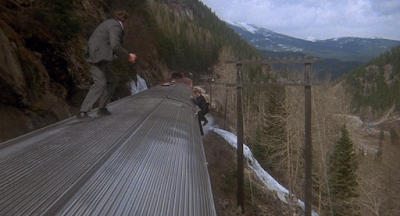 There are other surprises, as well. Richard Kiel, the actor that played Jaws in the James Bond films The Spy Who Loved Me and Moonraker, predates his Bond villain work by appearing here as “Reace,” a massive tough guy enforcer who has metal teeth. Yes, you read that correctly: he’s Jaws before he was Jaws. I was sure that he’s in this movie because the filmmakers were chasing the Bond success, but the dates don’t lie. He was in this movie a year before he first portrayed Jaws. In another Bond connection, Clifton James, the actor who played Sheriff J.W. Pepper in Live and Let Die and The Man With The Golden Gun, appears as another sheriff here, no doubt trying to capitalize on the success of those films. Character actor fans take note: The Prisoner himself, Patrick McGoohan is the heavy, and Ray Walston (Fast Times at Ridgemont High) is another bad guy. Also watch for Scatman Crothers, who is becoming a regular player in these 1976 pieces, as well as funny man Fred Willard, way before his later successes.

Silver Streak was largely a Canadian production, with the wide open spaces of the Great White North standing in for the American countryside. The film was directed by Canadian filmmaker Arthur Hiller, who had perhaps his biggest success when he helmed 1970’s Love Story, the film with the ridiculous tagline “Love means never having to say you’re sorry.” He’s also the guy who directed the third collaboration between Gene Wilder and Richard Pryor, 1989’s See No Evil, Hear No Evil. This movie was written by Colin Higgins, the screenwriter behind 1971’s Harold and Maude who would go on to write and direct the ‘80s workplace classic 9 to 5. Not too shabby. 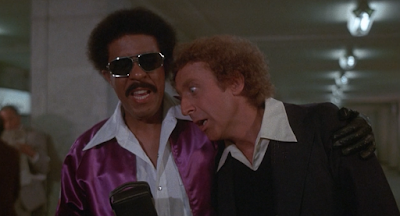 There’s so much charm packed into Silver Streak that what doesn’t work is barely noticeable. As often as I talk about tonal whiplash, it’s almost never unwelcome, and sometimes, like here, it’s the very thing that pushes a standard movie into being noteworthy. The comedy of Silver Streak quickly gives way to romance, and then to surprising graphic violence, proving that violent delights had violent ends even in 1976. There’s an impressive train crash here that predates similar action scenes from both Speed and Die Hard: With a Vengeance. The icing on this weird little cake is the presence of Gene Wilder and Richard Pryor, two very likable people who had very different backgrounds but ended up forging a partnership that lasted for years. Whatever it is that we want from movies, from laughter to suspense to action, this movie somehow manages to provide it all in a fun, memorable package.


Find more Heath Holland at his blog Cereal at Midnight!
Posted by Patrick Bromley at 12:00 PM