Thrills, Chills, & Spills: THE GHOST IN THE INVISIBLE BIKINI

It’s appropriate that Boris Karloff is featured in this last of the “Beach Party” movies, because it was Frankenstein-ed together from various pieces of other movies.

At some point during last month’s Junesploitation orgy, I discovered that I had never seen the final entry in AIP’s famous “Beach Party” series, The Ghost in the Invisible Bikini. (I had seen previous entry How To Stuff A Wild Bikini dozens of times, and I guess my boozy brain just conflated the two films for many decades.) I discovered that I did not own The Ghost in the Invisible Bikini, but it is available to stream on Amazon Prime and to rent on iTunes for anyone with $3.99 to spare. And finally, I discovered my love for the “Beach Party” films has limits. 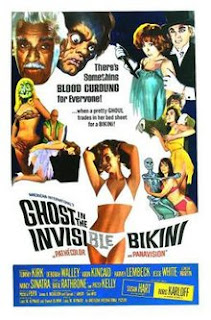 The Plot in Brief: The titular Ghost (Susan Hart) visits a corpse named Hiram Stokely (Boris Karloff) in his coffin and informs him that if he wants to get into heaven, he has only 24 hours to perform a good deed. Her timing is advantageous: the evil Reginald Ripper (Basil Rathbone) is trying to bilk Stokely’s rightful heirs, Lili and Chuck (Deborah Walley and Tommy Kirk) out of Stokely’s mansion and fortune. Stokely will conspire with the comely Ghost to intervene.

Fortunately, the beach party gang arrives to use the mansion’s pool and throw a monkey wrench into Ripper’s plans. Nancy Sinatra and the Bobby Fuller Four show up and perform. Dim-witted motorcycle gang leader Eric Von Zipper (Harvey Lembeck) stops by with his “Rat Pack” to create mayhem. Some other stuff happens and it’s all very confusing and ends with a woman tied to a log.

The Ghost in the Invisible Bikini is a mess. It plays like a fever dream. It’s as if someone piled the previous nine “Beach Party” films into a blender and pressed “frappé.” The film seems like a half-baked attempt to combine AIP’s two most popular series—beach movies, and the Roger Corman/Vincent Price/Edgar Allen Poe films. During production at AIP, the film was known as Beach Party in a Haunted House, Slumber Party in a Horror House, Pajama Party in a Haunted House, and The Ghost in the Glass Bikini before the studio settled on its eventual title. Frankie Avalon, Annette Funicello, and Jody McCrea were all slated to appear in this film, but they all bailed at the last minute. You can see how similar actors Tommy Kirk, Deborah Walley, and Aron Kincaid took over their roles. It’s like watching a “Beach Party” movie from another dimension—a dimension where there is NOT EVEN A BEACH. 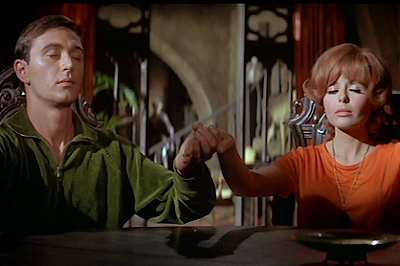 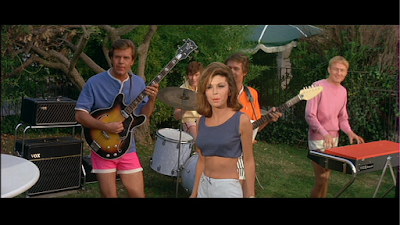 I have waxed nostalgic on this very website about the Channel Seven 3:30 Movie of my youth. Every weekday from 1968 through 1980, Chicago’s ABC affiliate shoehorned a movie between game shows and the five o’clock news. That meant fitting a feature film into a ninety-minute time slot minus commercials. Not many films were up to having 45 minutes or more trimmed from their running times, but the “Beach Party” films seemed tailor-made for this sort of radical abridgement. Ghost in the Invisible Bikini seems like a film made up of all the material that Channel Seven cut out of the other nine “Beach Party” films, then edited together in a completely random order with no attempt at narrative continuity. It is also the only film in the series that arguably could be improved by being radically shortened. Snip!

Part of the film’s incoherence may lie in the fact that, once the film proper was finished, AIP went back for reshoots that added the Boris Karloff and Ghost characters, and then edited the new storyline into the film, including every appearance by the title ghost. Imagine if Christopher Nolan had decided to film everything with the Joker only after finishing the rest of The Dark Knight… and then went back and edited him in. Gadzooks!

Boy, did AIP grind them out. Roger Corman’s famous Poe series comprises eight films made in only six years. The “Beach Party” franchise comprises ten films made in only three years: Beach Party in 1963; Muscle Beach Party, Bikini Beach, and Pajama Party in 1964; Beach Blanket Bingo, Ski Party, How to Stuff a Wild Bikini, Sergeant Deadhead, and Dr. Goldfoot and the Bikini Machine in 1965; and Ghost in the Invisible Bikini in 1966*. Whew! 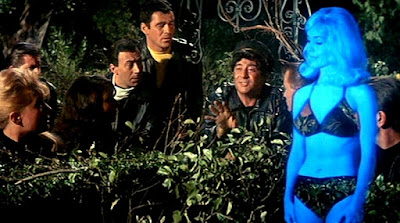 THRILLS: 50%
(Kind of fun to see the old AIP “Beach Party” gears churning, but by 1966 the series was running on fumes.)

CHILLS: 0%
(Not scary at all—it’s as if the screenwriters and filmmakers had never been scared in their whole lives and were relying on third-party accounts from people who saw other people being barely scared in movies.)

SPILLS: 75%
(A couple good throwaway gags and one stunt that was later used as stock footage in other AIP films.)

* Although AIP’s Fireball 500 features Frankie Avalon, Annette Funicello, and Harvey Lembeck—and Thunder Alley features Annette and Fabian—I do not consider them part of the “Beach Party” series. MY WORD ON THIS IS FINAL.