Tobe Hooper takes us back into the woods.

It’s 1976, and you’re Tobe Hooper. You’ve made one of the most frightening and realistic horror movies ever committed to film with The Texas Chain Saw Massacre. Years from now, people will still use your masterpiece as a template for their own scary stories. But where do you go from here? You want to continue with horror, because it’s a genre that you truly understand and can use to convey your ideas, but you also know that you don’t want to repeat yourself, at least not exactly. How can you make another horror movie without it being compared to what you’ve already done?

Eaten Alive is the answer to these questions. Perhaps realizing that comparisons would be unavoidable, Tobe Hooper set out to film an adaptation of a real-life horror story about a rural Texas man in the 1930s who may or may not have been killing people and feeding them to his alligator. Kim Henkel, Tobe’s co-writer on Texas Chain Saw Massacre, adapted the screenplay from the historical case, and two other writers, Alvin L. Fast and Mohammed Rustam, finalized this story of a madman and his gator. Of course, fans of TCM will find lots to love here. We have another rural location set in the south, a truly bizarre cast of characters with very few redeeming qualities, and a redneck with no sense of morality whatsoever. Furthermore, we have gruesome kill scenes and a feeling of dread that permeates the entire film but becomes almost unbearable as we near the climax. On paper, this sounds like the exact same territory as Hooper’s previous hit, but in the hands of this able director, it becomes something completely different and unique. 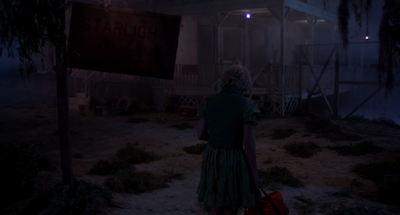 For starters, TCM feels like a documentary, as if we’re really watching it happen, while Eaten Alive is decidedly cinematic. Tobe Hooper is therefore able to employ a whole toolbox of devices and methods in this film that he couldn’t use in his earlier horror film. Eaten Alive (filmed under the title Death Trap) was shot entirely on a sound stage in California, so Hooper had complete control of his environment. The swamp is a water tank. The rural, dilapidated motel that serves as ground zero for the atrocities that occur was a fabrication, and it feels claustrophobic and isolated because of this. Furthermore, Hooper is able to control things like light and darkness in a way that would be much more difficult on a location shoot. The color red plays a very important role in this film, nearly always present, making it impossible for the viewer to relax and lower our guard. Hooper uses elements that would go on to be hallmarks of a certain kind of horror film. Country music from the sixties and seventies plays softly in just about every scene. Furthermore, the director was a real master of sound design, using unconventional noises to help convey dread and unease. In The Texas Chain Saw Massacre, it was the use of saw noises and kill house ambiance, but here it’s things like chimes, bird sounds, and a synthesized high pitch that gets louder and higher as the movie progresses. Hooper also uses sex, both willing and unwilling, helps to convey desire, desperation, control, frustration, and anger. A corrupted sense of patriotism is present in our killer, and a lack of moral core seems to affect just about everyone. Racism is casual. It’s the sort of thing that would be highly influential to Tarantino and Rob Zombie, both who borrow heavily from the Tobe Hooper playbook. 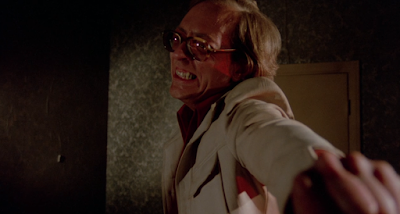 Cast to perfection, the actors in this film add to the sweaty sense of isolated desperation. The gator guy himself is named Judd, and he’s played by the character actor Neville Brand. With his mask of a face, Brand had a great career in B-films, noirs, and westerns throughout the forties and fifties, appearing in such notable films as D.O.A. in 1949 and Kansas City Confidential. He was always physically imposing, and that’s true here as well, even though he’s much older and nearing the end of his long career. The great Carolyn Jones, perhaps most widely known as Morticia Addams on The Addams Family series but certainly an actress with a long and illustrious career in her own right, appears here under heavy makeup as the leader of a brothel with no concern whatsoever for the safety and well-being of her girls. It’s interesting to see her play someone so completely and utterly horrible. Similarly, Mel Ferrer (1956’s War and Peace) is another high-profile actor from some really great classic-era Hollywood pictures that I can’t believe agreed to be in this movie.

Marilyn Burns, who was Sally in TCM, appears here as another girl who ends up in a horrible predicament. She also appeared in Helter Skelter, a 1976 TV movie about the Charles Manson murders. The great character actor William Finley (Phantom of the Paradise, The Funhouse) gives a great unhinged performance, while another wonderful character actor, Stuart Whitman (7 Men from Now), plays the sheriff investigating the case. 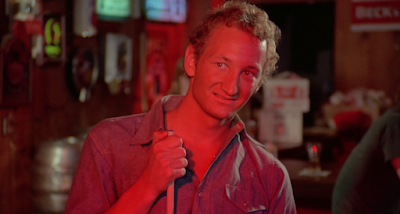 Perhaps the biggest standout, at least for me, is Robert Englund, who was having a really great 1976. This is his third appearance in the “Back to 1976” series, after his uncredited turn in the Kristofferson/Streisand version of A Star Is Born and his part in the bodybuilding drama Stay Hungry. He also had a part in a Charles Bronson movie called St. Ives. He gets to do some of his dirtiest work in this movie, channeling the misogynistic nastiness he would bring to Freddy Krueger some years later. He’s so good at being a real piece of crap that it’s almost too convincing.

Yet, somehow, Eaten Alive manages something that I don’t know is true of The Texas Chain Saw Massacre: it’s a lot of fun. Not fun in a “hee hee” kind of way, but fun in an “I can’t believe I just saw an alligator eat that” kind of way. Fun in a spectacle, carnival sort of way that I believe heralds the director’s future work, such as The Funhouse. I detect a sly, dark sense of humor at play here that I appreciate. It’s over the top in the best of ways. That’s not to say that Eaten Alive is not scary, because it is. The horror draws from real human atrocity, and that is (hopefully) always unsettling. But Hooper seems aware of the real horror and is willing to have some fun with his subject matter and with us, his audience. Whereas Leatherface is a truly terrifying creation, Judd the redneck with his scythe is played at top volume and comes off as a killer we kind of enjoy watching work. 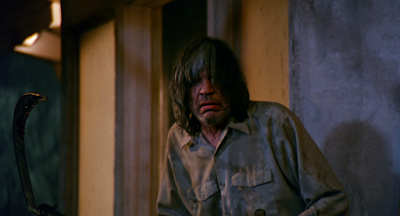 In this sense, I feel like Eaten Alive is ahead of its time. It feels to me like a movie that should have been made in 1983, when horror was big business and video cassette box art competed to see who could have the most outrageous imagery. But then again, we are talking about Tobe Hooper, a man who was most definitely ahead of his time. Maybe that’s why he clashed with his producers on this movie and left the production before it had completed filming. That does not imply that Eaten Alive is not a Tobe Hooper film; it clearly is. But Hooper seemed to always be ahead of everyone, an auteur who was rarely given the control or the credibility that he deserved. For evidence of this, one need look no further than this movie, unsung and under-seen, yet made just two years after his greatest masterpiece. But Eaten Alive is also evidence of a director who was not content to repeat himself and who kept pushing against boundaries and expectation. If that isn’t the mark of a great filmmaker, I don’t know what is.