In the iconic stoner comedy Dazed and Confused, we meet a character named David Wooderson, played by Matthew McConaughey. Wooderson is in his early twenties but still socializes and dates high school students. Even though he should be moving into another phase of his life, he can’t let go of his former glories and face the reality of stepping into adulthood. Have you ever wondered where Wooderson might have been ten years later? In a weird sort of way, 1976’s Lifeguard gives us the answer. Sam Elliott (Frogs, Road House), a serious contender for the most macho man ever award, plays Rick, a man in his thirties who spends his days as a lifeguard at a southern California beach. He’s not just any lifeguard, though; he’s the best of the best, saving lives, solving problems, and serving as a proto-Hasselhoff ideal. He’s seen and done it all and is now a veteran of the scene, commanding the respect of the sun bathers and his co-workers alike. 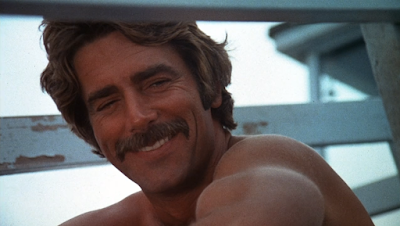 For Rick, the beach is his home. It’s where he feels most comfortable, and where he finds acceptance and success. Not unlike the mentor characters from the beach movies of the early sixties, he has wisdom and experience pertaining to a certain way of life, and he’s turned his back on society’s expectations of a high-paying adult job in favor of living unencumbered. He drives a corvette with the top open so the wind can blow through his sun-bleached hair. He has no attachments, drinks casually, and has his pick of the ladies, who seem to admire him as some sort of paragon of masculinity. It must be the mustache.

But Lifeguard finds Rick at a crossroads. Against his better judgment, he’s begun a sexual relationship with an underage girl, played by Kathleen Quinlan (American Grafitti, Apollo 13), a dalliance that he knows will only bring trouble. At the same time, he attends his high school reunion and reconnects with a former flame, played by Anne Archer, who was also in another movie from the 1976 series, Trackdown. Archer’s character is divorced and raising a young child by herself, and she and Rick seem to pick up right where they left off years ago. Rick is now faced with a choice: does he continue to live a carefree lifestyle that offers him no challenges and small rewards, or does he let it go in favor of a meaningful relationship and future? 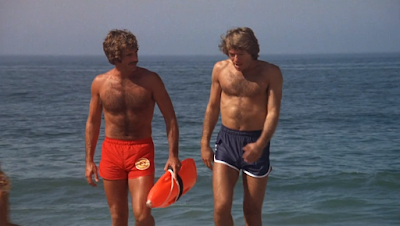 Something I love about these seventies flicks is that they can approach heavier topics without being preachy or pretentious. This film’s subject matter seems to lend itself to a melodramatic approach, with shots of Sam Elliott staring into the sunset while his tortured soul battles with which direction he should choose. Surprisingly, those shots never come. Elliott never has an Oscar moment where he breaks down in the shower or cries in a cold bed. The movie, believe it or not, takes a super-casual approach. Someone who doesn’t like this film might even say that it’s lazy, but one of the things that I appreciate about it is how low-key all of this stuff is presented to us.

In this way, the movie embodies a sense of experience and fatigue that is inherent in a lot of films from this time period, but also one that’s hard to describe. You see it in John Travolta’s performance a year later in Saturday Night Fever and you see it in Gene Hackman’s performance in The French Connection from a few years earlier. It’s a weariness, a moral grayness brought on by society and its choices, as people metaphorically close their eyes and do whatever they have to do in order to survive. This movie makes it understandable and even acceptable that Rick’s suffering from arrested development. In fact, I use the word “suffering,” but this movie might even disagree with that assessment. It places no judgment on Rick’s status as the biggest fish in the small pond. It occasionally feels as if it’s celebrating it. 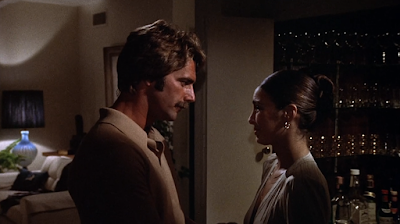 At times, Lifeguard feels like an exploitation movie, not entirely out of line with future sex comedies like Spring Break or Hardbodies, as characters sit on their lifeguard tower and ogle the girls while discussing their sexual experiences. The director makes sure to give the viewer lots of bare skin, too. It all contributes to a bigger picture, though, showing the appeal of Rick’s lifestyle so we understand the temptation of staying in this place. In one scene, Rick meets a woman in a bar and makes repeated double entendres, displaying his immaturity and stagnation. The movie is equally sweet and tender later on, when we realize how much has been missing from Rick’s life. It’s all about contrast, and the movie gives us plenty of it.

Lifeguard is directed by Canadian filmmaker Daniel Petrie, probably most recognized for 1961’s A Raisin in the Sun. Given Petrie’s pedigree, the laid-back, observational style of directing appears to be a deliberate choice. This is no after school special and morality is not crammed down our throats. Just as I observed with another movie during this 1976 series, Shoot, there’s an argument to be made for each side, with Petrie allowing the viewer themselves decide if Rick has made the right decisions. Finally, I can’t end without talking about Paul Williams. Yep, the real superstar of the “Back to 1976” series is back yet again with a song contribution “Time and Tide,” which sounds a lot like a later-period Beach Boys song. I believe this is the 114th appearance of Paul Williams during this series, making him by far the hardest working person in the movie biz of 1976. While I’m talking about the music, I do want to point out how cool the soundtrack is for Lifeguard. It’s got a very trippy, happy seventies jazz-type thing going on, with some Moog synthesizer added in for good measure. If this soundtrack existed on its own, I’d add it to my collection toot sweet. 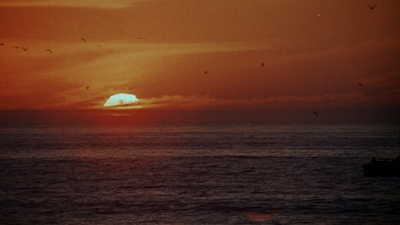 Lifeguard is another fine example of the wonderful variety of films that audiences were treated to in 1976. I love how easy it is to watch, never preaching to the viewer or laying on hammy messages. Instead, it allows us to make up our own minds. If we choose to retreat into the movie only in pursuit of sun, sand, and skin, those elements are there. If we’re seeking something deeper and more meaningful, such as an examination on the sort of decisions we all face in our own lives, that’s in there too. Sam Elliott is wonderful in the lead role, and Anne Archer is fantastic, offering warmth and tenderness that feels like shelter to Rick and to the viewer. Kathleen Quinlan is equally great as a vulnerable presence in Rick’s life who is destined to get hurt, no matter what happens. I love these little slice of life movies from the seventies, and I love how realistically this movie shows a man at a crossroads, torn between the existence he’s living and the one he could have. Lifeguard is, ultimately, a story about people, not plot. There are no heroes or villains, only characters busy with their own lives. What we take from them is up to us.

Get more Heath Holland at his site Cereal at Midnight!
Posted by Patrick Bromley at 12:00 PM