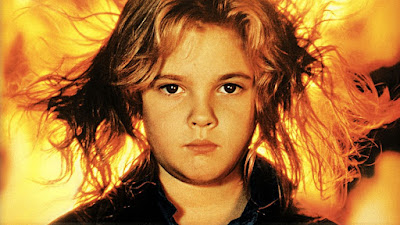 A lot of fire goes a long way.

It's become an October tradition (for me; no one else cares) that I write one of these "Movies I Love" to kick off #ScaryMovieMonth, I think because I want to set a tone of positivity by celebrating a movie that's special to me. This year, it has been incredibly difficult for me to pick a movie to celebrate. For one, we've been around long enough at this point that we've covered so many of the movies I love, which takes a lot of titles off the table. For another, I've experienced some major, major writer's block lately, and the thought of trying to articulate why I love a certain movie seemed almost impossible -- especially if I wanted to do that movie any kind of justice. No matter what film I picked, I almost immediately talked myself out of it. In some cases, I even revisited a movie to see if it would spark something, but no luck. I'm empty.

I don't mean for this to be an excuse, but rather an apology. An apology to you, the reader, who clicked on this piece hoping for some new insight into a movie that isn't talked about enough. More than that, though, it's an apology to Firestarter, a movie I love that probably won't get the appreciation it deserves even from me. Lost in the shuffle of being yet another Stephen King adaptation in the 1980s -- a decade that saw King's work adapted to the screen a lot -- Firestarter has a reputation as middling and unremarkable. Even its fans seem unable to muster more enthusiasm than "It's ok." My affection for it is considerably greater, even when I recognize that the movie itself may not be truly great. 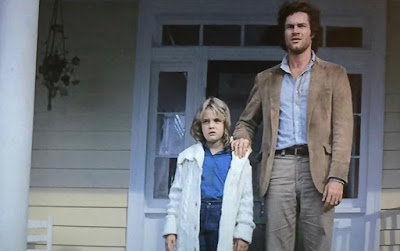 Released at what might have been the peak of adapting Stephen King to the screen -- The Dead Zone, Christine, and Cujo were released the year before; Children of the Corn released the same year; Cat's Eye and Silver Bullet the next -- Firestarter comes from King's 1980 novel about a young girl born with special abilities after her parents are subjected to government experiments. Living life in hiding as they attempt to understand and control her powers, Andy (David Keith) and little Charlie (Drew Barrymore) are eventually kidnapped by a team of government scientists known as "The Shop" and run by an evil prick played by Martin Sheen, one year off his turn as an evil prick in The Dead Zone. Also working for the shop is John Rainbird (George C. Scott), who befriends Charlie in the hopes of one day murdering her and taking her power with him into the afterlife. That's a thing in a mainstream movie put out by Universal! Anyway, eventually a lot of shit is set on fire. This movie would be disappointing if it didn't.

Firestarter began its life as a John Carpenter project, but after the box office failure of The Thing, Universal wasn't interested in giving Carpenter the big budget his version of King's novel would require. A new script, one more faithful to the novel, was commissioned and Mark L. Lester was brought on to direct coming off of the great Class of 1984. Regular readers of this site know what a Mark Lester fan I am, so his involvement in the movie certainly doesn't hurt my love for it. He's a guy who came up through the drive-in and exploitation cinema of the 1970s, so watching him graduate to a big studio movie like Firestarter is interesting. Lester serves the material well, but I can feel a slight sense of caution in the way he directs. The movie is confident, yes, and quite capable, but it's missing some of the personality that his earlier work has, so it's a little like someone nailing a job interview because he or she said everything the other person wanted to hear. There are times watching Firestarter where I miss the old Lester, whose movies felt a little crazy, a little dangerous. He would strike that balance much more successfully in his next movie Commando, which is a good mix of studio slickness and gonzo exploitation insanity. 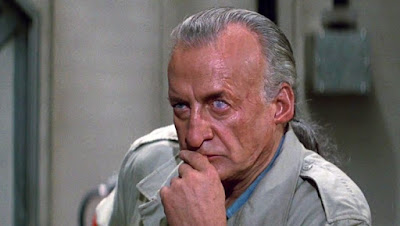 The beauty of a lot of these earlier Stephen King novels -- and, by extension, their big screen adaptations -- is that they begin with a high concept but quickly drill down past all that to focus on characters. Sure, Christine is about a killer car, but it's really about a two teenagers watching their friend Arnie disappear into obsession and madness. The Dead Zone gives its protagonist psychic visions, but it's a tragedy about a failed relationship and a man cursed with a sickness he didn't ask for. Firestarter is, on its face, the story of a little girl who can start fires with her mind, but beneath that premise is the story of a single father trying to protect his daughter from the dangers of the world while recognizing there are things within her that even he cannot understand. Suggesting that Charlie's special abilities are a metaphor for womanhood is to paint Firestarter as deeply misogynistic, and the world is all full up on that right now. I don't think King (or Lester) make Charlie a destructive force because she is female, but I do think she is given a different power than her father (who has the ability to make psychic suggestions) as a way of painting her as possibly more than Andy is able to mentor, to raise, to protect on his own. The kinds of deeply felt relationships like the one between Andy and his daughter are what's at the heart of so many of King's novels. It's what makes me want to keep revisiting them. It's what makes them last.

Of course, theirs is not the only significant relationship in the movie, because we also get the completely insane connection between Charlie and Rainbird, played by a totally miscast George C. Scott. Part father, part friend, all evil, Rainbird deceives the girl by posing as an orderly named John, going so far as to pretend to be afraid of the dark as a way of seeming vulnerable and childlike. Scott is such a weird choice to play Rainbird (when Carpenter was still signed to direct, he wanted to cast Assault on Precinct 13's Darwin Joston), but he's such a good actor that he winds up as the biggest standout even among an amazing cast that also includes Art Carney and Louise Fletcher as a kindly couple who give cover to Andy and Charlie. With his sizable bulk, his ponytail, and his eyepatch, Scott turns Rainbird into such an eccentric creation that he's practically a freak; watching him and Drew Barrymore occupy the frame together is like the scene in Frankenstein where the monster is picking flowers with the little girl before tossing her into a lake (spoilers for Frankenstein, I guess?). Rainbird's endgame is demented and Scott's commitment to the performance so devoted that it's all fascinating when it could have been the sort of thing that completely derails the movie. 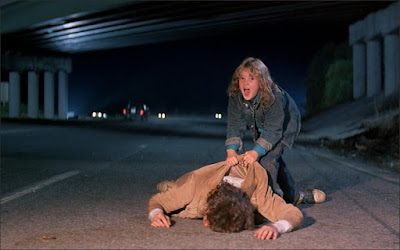 So Lester's direction plays it a little safe and the material isn't necessarily King's best, but then there's Scott's unhinged performance and the strong relationships between the characters. That sounds like an even scoreboard. What tips the movie over into one I love is all the other stuff, like the widescreen photography by Giuseppe Ruzzolini (the aspect of the movie that actually feels left over from the would-be Carpenter version) or the gorgeous Tangerine Dream score, giving the film their characteristically dreamy vibe that's at odds in the best way with the more overheated elements (I would say pardon the pun, but let's just face the reality that I'm a fucking hack and a garbage writer). The thing I love most about Firestarter, though, are the fire sequences, which are among the best and most impressive I've ever seen in a movie. Modern VFX have become so sterile and weightless that seeing the kind of mayhem Lester orchestrates in Firestarter gets me excited about genuine movie magic. The climactic showdown, in which Charlie lays waste to an army of government henchmen, is so fucking spectacular that it makes the entire running time worth it even if you haven't been into it up to this point. Literal fireballs fly through the sky, blowing up cars and people alike. It's awesome. Seeing the movie in high def courtesy of Scream Factory's Blu-ray reveals some wires I hadn't noticed in the past, but I don't even give a shit because it's so insane and cool. The hair-blowing effect on Drew Barrymore starts to be almost comically overused, but that's just another thing I love about Firestarter: it commits to its every conceit. 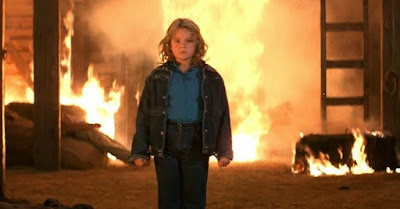 I didn't always love Firestarter, a movie which, like so many movies for which I have a great deal of affection, crept up on my slowly, working its way into my brain and my heart over several years. In fact, elsewhere on this site I referred to it as being "pretty generic" a few years ago. I could only have been seeing the movie on its surface, ignoring the colorful details and technical skill on display from every department. Sure, it's probably too long at almost 120 minutes, and eight-year old Drew Barrymore's performance wavers back and forth between kid actor mannerisms and and natural sincerity. None of these things ruin Firestarter for me. I don't know, maybe I'm way off base on this one. I know I haven't made as effective a case for why the movie is special as I might like -- my mental state and the limitations of my abilities as a writer simply won't allow it -- but I hope just knowing how much I dig it is enough to inspire one of you to give it a first or second chance. It's a movie that does things no other movie does in the same space. It's a movie with a reputation I hope to improve. It's a movie I love.