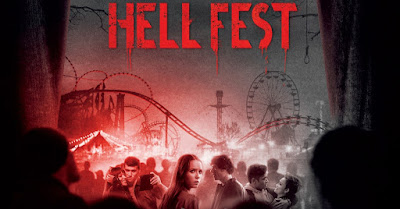 What a pleasant surprise to kick off Scary Movie Month!

Wish Upon tweaked my brain to the point where now I’m super excited for any new teen/college-aged horror film. Friend Request was rough. Truth or Dare was pretty funny. Slender Man had its moments. Next on my list chasing this very specific 80% genuine/20% ironic horror dragon was Hell Fest. I was all in after seeing its amusing trailer, where every young person seemed irritated. I sat down and watched the movie and, to my pleasant surprise, it’s not "tongue-in-cheek" good -- it’s actually good. Good like I can defend it without having to apologize or prefacing that maybe it’s just my specific taste in movies. Hell Fest is straightforward, tense, and a helluva lot of fun. It could have been very generic and disposable, but instead director and former (?) Blumhouse editor Gregory Plotkin (he co-edited this film) uses it as an all-out kick-butt calling card that reminded me of Jaume Collet-Serra with his 2005 House of Wax remake. I might need to watch Plotkin’s previous directorial effort, Paranormal Activity: The Ghost Dimension, now. I guess Hell Fest isn’t a calling card. I blew that comparison, didn’t I? 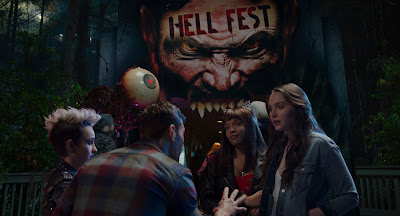 Hell Fest is about a group of Beistle decoration-owning (!!!) friends who go to a traveling horror night where they are stalked by a masked killer credited as “The Other.” That’s it. The heroine doesn’t have a tragic backstory, the slasher isn’t given a lengthy history (the opening credits and final moments are about it). It’s all very normal and natural. Actually, the first act feels so natural that it’s jarring at first. The dialogue and acting are bizarrely mundane (e.g. there’s a short conversation about a soft pretzel someone is eating at Hell Fest needing mustard and none of it seems like it should be in the final cut of a movie) and the personalities given to the group are annoying at first. But after the intros, a lot of the characterization just evaporates and the actors become stand ins for the set-pieces, which is great because they stopped bothering me with their broface and horror punk personalities. Hell Fest is more interested in succeeding with music (Bear McCreary), production design (Michael Perry), art direction (Mark Dillon), and editing (Plotkin and David Egan), and that’s where it really soars. I was able to forgive the screenwriting, which isn’t on the same level, because once the film gets going, it’s one solid scare sequence after the other. It’s a very “MOVIE” movie in the best way. 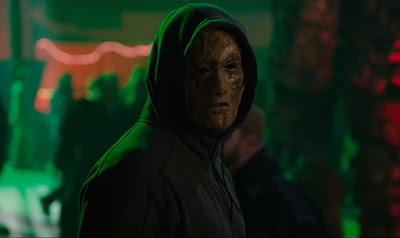 The film does two things that are really smart. First, it goes bananas with jump scares in the early going. Hell Fest is a carnival with mazes, which provides the film with opportunities to just interrupt its cast with jump scares by costumed actors that are in the movie for that specific purpose on a textual level. It’s so frequent that it kept me on edge because even if the scare actor didn’t frighten me, it heightened my awareness and turned watching the movie into a more first-person experience, like I was walking through a scary maze myself. Then, when we are in the mazes, The Other is stalking the kids, which works as a double scare because we’re wary of the villain but also on edge by the false scares in the maze. There’s a minor beat where, while going after the leads, The Other walks through a room in a scary hell-themed maze with trepidation (he thinks the heroine is hiding in there too) and it’s amazing. The more I think of it, I really like the lead character, Natalie (played by Amy Forsyth). When things get too intense, she goes to one of the security guards for help and when he dismisses her, she chews that dude out and takes charge shortly after. I’m not sure if it’s meant to be a commentary on men not listening to women (that might just be me projecting), but it was nevertheless effective when I watched the movie.

There are some things I didn’t love about Hell Fest despite pretty much loving the movie on the whole. As I mentioned, I was worried at the beginning because the characters are a bit in your face (the performances for the most part are fine/it needed more Tony Todd/where’s Joey King?) and also I’m not sure the ending is entirely satisfying (which I won’t hint or spoil). None of that overtakes the film’s best qualities, though. The production design of this park and these mazes are fucking amazing. It feels grounded enough where you’d see them in a real attraction, but specifically at the best horror maze attraction you could possibly visit. I know Six Flags parks in a few cities (including Chicago, Los Angeles and St. Louis) have mazes based on this movie throughout the month of October. I’m going to one. I need it! Eighty percent of me hopes I genuinely make it out of there and 20 percent hopes I ironically don’t.

Hell Fest doesn’t turn tropes on its head or re-invent the slasher film, but that’s not really important to me. It embraces what it is, amps up the energy, and is on par with much of the horror that laid its path. If you think you’d like the movie, you probably will. It’s well-made and just the movie I was in the mood for after watching the Netflix documentary Haunters: The Art of the Scare last week. Thankfully, none of Hell Fest is extreme haunt humiliation and torture terror. Ain’t nobody got time for that.
Posted by Patrick Bromley at 12:00 PM