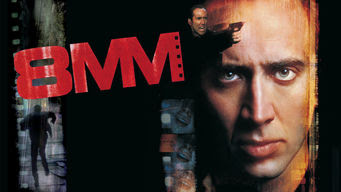 “Well that wasn’t about what I thought it was about.”

That was my reaction when I saw 8MM on opening night, Friday, February 26, 1999, with a few friends at our nearby multiplex. We knew we were seeing the new Nicolas Cage thriller, but otherwise we didn’t know what the film was about. Imagine our surprise when we got a crash course in the world of underground, industrial sex, and violence videos. 8MM soon after became a short-hand joke with all of us (“Riske got dumped. He’s sad. Like 8MM sad.”). The only way we could reconcile this movie and all its implications was to laugh it away. Personally, 8MM was a thing that disrupted my pursuit of happiness for a week in 1999. For example, later that weekend I met a girl who was smoking a cigarette at a bowling alley and got her phone number. I called her. She never called me back and naturally I assumed she had become the victim of an 8MM scenario. These things happen.

8MM is the type of movie where I understand why it was made more than I understand why anyone wants to watch it. I’m sure the filmmakers and studio were still trying to cash in on the success of Se7en (both films were written by Andrew Kevin Walker) and Cage and a floundering, post-Batman & Robin Joel Schumacher (who directed) wanted a change of pace from the mainstream blockbusters they were most known for the previous several years. But why are audiences (including myself) drawn to a film whose intent is primarily to make us feel like shit? Is it the safe release of dark feelings like when you watch an extreme horror movie? Does it tap into the same fascination people have watching dark true-crime stories? I don’t have an answer (or expect one) for why “we” watch movies like 8MM, but it’s interesting that “we” do. This was a popular movie. Considering its subject matter, it did decent business at the box office and I can attest it rented well when I worked at Blockbuster. In retrospect, casting Nicolas Cage was a wise decision because it made an unseemly story more mainstream. You’re being given permission to watch something really fucked up. 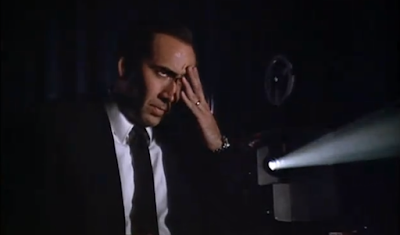 My viewing of 8MM this past weekend was my first since opening night. What I discovered was the movie is a lot more dangerous in concept and ideas than in execution. Joel Schumacher is a stylist, and that exaggerated grittiness and industrial slime almost gives the movie a safety net. The locations and characters are threatening but just knowing in the back of my mind this is a Schumacher movie made me relax a bit more than I would if it were directed by someone like William Friedkin or Lars Von Trier. It also helps that Cage’s character makes sporadic stops back home to see his wife (Catherine Keener) and their baby. It breaks up the depravity, which on one hand is a relief but on the other undercuts the descent into hell his character is enduring. Maybe I’ve just seen darker cinema since 1999, but on this re-watch, I was surprised how (for lack of a better phrase) easy 8MM is to watch nowadays. It’s not nearly as shocking as it was in 1999. Gross? Yes. Disturbing? Sure, but more so disturbing out of surprise since it’s a Columbia Pictures wide release that normally isn’t this unsettling.

The part that messed me up the most this viewing had nothing to do with the snuff film (thankfully most of which is implied and shown off-screen). It’s during Cage & Joaquin Phoenix’s odyssey and they stop at what looks like a basement baseball card/horror convention, but instead everyone is selling sex & violence videos and paraphernalia. What’s most messed up about it for me is that the vendors selling goods look like the guys you see at “normal” conventions selling things like bootleg movies and TV series. It makes me wonder: are some of the people at a con that sell the de-specialized editions of the original Star Wars trilogy (for example) also Merchants of Snuff (great band name)? They are now in my mind. Quick digression: Why do bootleg movies you buy at cons always have that smell? You know the one I’m talking about. They have a unique sin odor.

What makes 8MM a compelling watch in 2019 is mainly the performances. The cast is impressive with Nicolas Cage in internal, brooding mode (he did this again in 1999 with the great Bringing Out the Dead) and then-rising star Joaquin Phoenix being quirky and interesting because he’s incapable of not being quirky and interesting. I also give credit to writer Andrew Kevin Walker and director Schumacher for going all the way with the film’s villains. Even when Cage has Peter Stormare, James Gandolfini (so good here), or Chris Bauer (as Machine, an S&M Bane that had to be one of Schumacher’s ideas) cornered, they don’t give a fuck. They’re evil to the end. When Cage is about to kill Gandolfini, the latter goes into full-on beast mode and it’s incredible. The film tries to do this again with Chris Bauer in the climax to lesser success because he turns into the talking killer trope, which is made sillier because he and Cage are duking it out in a rainy cemetery.

So, what’s 8MM’s legacy 20 years later? Same as it was in 1999 when it was released and before that in 1979 with George C. Scott’s movie Hardcore. It’s a movie to put on when you want to remind yourself how lucky you are that your life is boring. (SPOILER for 8MM) The final scenes of the film wrap a sordid story in a nice, safe bow. First, Cage’s character gets two wads of money: one for himself that’s enough to send his daughter to college and one for the mother of the slain girl in the snuff video. So, financially (in a weird way) everyone comes out ahead. It feels weird. Second, Cage goes home to Keener and his baby daughter and cries to his wife, “Save me.” The final image we see of them is Cage raking leaves in his front lawn as he and his family lovingly share an “everything will be ok” look at one another. Did Cage go into the heart of darkness? Yes, but only so far that he could be pulled out of hellfire by a honey-do-list.