by Patrick Bromley and Charlie Bromley Pikachu, I choose you not to talk about this movie.

Pokémon aren't made for me. Detective Pikachu isn't made for me. The first "live action" adaptation -- to the degree that, say, Who Framed Roger Rabbit is live action -- of the insanely popular property casts Ryan Reynolds as the voice of the little yellow Pikachu, one of a seemingly limitless number of animal things called Pokémon. Because it's Ryan Reynolds, the cute, furry little Pokémon is now a little quip machine, making sex jokes about how he's "not that kind of Pokémon" and telling characters to "smell his finger." He's basically Deadpool, except at least those movies acknowledged his constant wisecracking was meant to be irritating.

This movie is nonsense, that's what it is. Exposition is handled via explainer videos. Rules of the world change depending on every individual plot beat. The animation is done well and the setting borrows a lot from future noir like Blade Runner, but there are worse inspirations to have. None of my problems matter. This movie isn't made for me, it's made for the millions of Pokémon fans who play the card game and the video games and collect the toys and watch the cartoons. In short, it's made for my 10-year old son Charlie, who counts Pokémon among his current obsessions. So who better to review the movie than him? 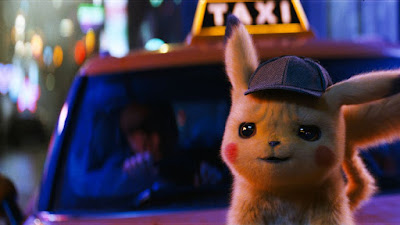 Patrick: What did you think of Detective Pikachu?

Charlie: I thought it was in the top 10 of my favorites. I liked how it was live action, not animated. That's basically all I liked about it, though. It was cool but I don't know how to explain it.

Patrick: Did any of your favorite Pokémon show up?

Patrick: And what's cool about Charizard?

Charlie: He can breathe flames.

Patrick: Explain Pokémon to me.

Charlie: Nobody's ever asked me that, actually. They're like animals, but they have other powers. Pikachu is a mouse, but he's electric. It's a card game you can play. There's video games about it. You can get cards and trade with your friends, and then you can play the game. It's kind of the luck of your cards; like, if you get a 30 HP Pokémon and then other bad Pokémon, you're done. But the deck is randomized.

Patrick: Back to the movie. Was this the only Pokémon movie you've seen?

Charlie: No, I saw The Power of Us. That wasn't live action, though. It was animated. 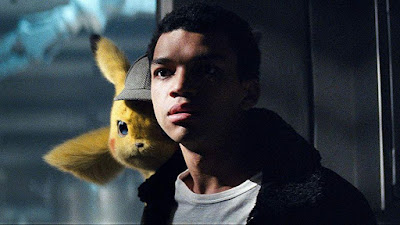 Patrick: Explain the plot to me.

Charlie: It's about a boy trying to find his father, so he teams up with a Pikachu. Wait, should I say a spoiler?

Charlie: Ok. They go to Rhyme City, which is a city with many Pokémon. They don't have battles there. Well, they were having battles, but that was kind of like an illegal thing, I could tell. The bad guy is Mewtwo, a very powerful Pokémon. A legendary Pokémon.

Patrick: Did you have a favorite part? 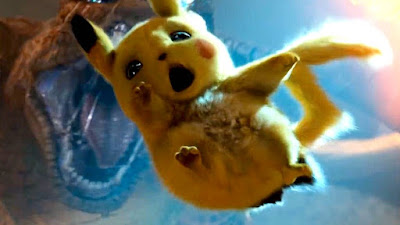 Patrick: Do you think they're going to make a sequel?

Charlie: Yes. Psyduck might go missing and they have to find him.

Patrick: Before you go, can you share your ranking of favorite movies with everyone?

Patrick: Thanks, bud. Love you.
Posted by Patrick Bromley at 5:00 AM