Okay, I’m a little disappointed that the box does not include a plastic ZOTZ coin or a tiny, bloody cardboard axe… but the strengths of this second box set more than make up for that.

Insane with pleasure over the contents of Powerhouse Films’ first William Castle box set, I gladly ponied up for the second. Covering three of Castle’s more obscure films from the early 1960s (and one absolute blockbuster), Volume II makes up for what may be viewed as less desirable titles with immaculate transfers and terrific bonus materials that make it a MUST BUY.

The set includes the films Zotz! (1962), 13 Frightened Girls (1963), Castle’s remake of The Old Dark House (1963), and axe murder classic Strait-Jacket (1964). Also included on each disc is a wealth of supplementary material that is both entertaining and endlessly educational. 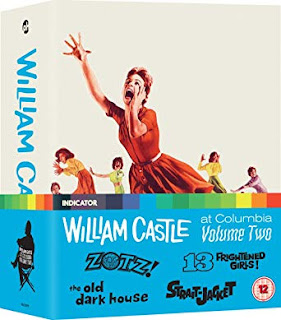 Zotz! is the story of professor Jonathan Jones (Tom Poston), who discovers a magic coin that gives him the power to hurt people, kill people, and slow down time. Hilarious hijinks ensue. 13 Frightened Girls (though obviously given that title to exploit Castle’s horror film success) is not a horror film, but a Nancy Drew-like who-dunnit: ambassador’s daughter Candy Hull (Kathy Dunn) attempts to solve an international CIA mystery. Hilarious spy-jinks ensue. The Old Dark House, a co-production with England’s famous Hammer Films, also eschews Castle’s horror reputation in that it is, like Zotz!, a light comedy. Car salesman Tom Penderel (Tom Poston) makes a delivery to the titular location and, because of a raging storm, is forced to stay the night. Hilarious hijinks ensue. Strait-Jacket stars Joan Crawford as Lucy Harbin, an axe-murderess who has just spent 20 years in the slammer. Upon release, she learns her daughter is about to wed a millionaire’s son. What could possibly go wrong? Serious beheadings ensue.

I have fallen in love with Stephen Laws and Jonathan Rigby because of their work on these Powerhouse special editions. They both obviously love the films they are introducing and fill their short pieces with insight, affection, good humor, and FACTS. Kim Newman, who I was familiar with through his reviews at the late, lamented Video Watchdog magazine, gives a zesty talk on the career of Ray Russell (who wrote the screenplay of Zotz!) that could be the highlight of the entire box set. It’s simply amazing. What a life this obscure writer led! (I mean Russell, not Newman.) 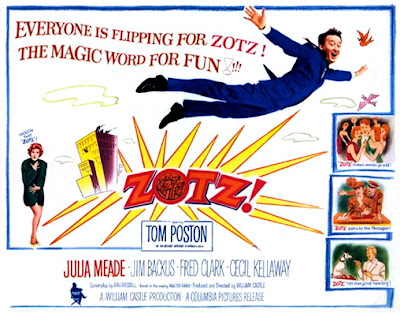 Likewise, Samm Deighan from the Daughters of Darkness podcast provides a commentary track for 13 Frightened Girls that is among the ten best (non-Sleepaway Camp) commentary tracks I have ever heard. Deighan methodically lays out a case for the film, suggesting that Castle was portraying female protagonists in the 1960s in a manner that simply wasn’t being done by other major studio filmmakers. It’s the rare commentary track that makes you want to watch the film again immediately after it concludes. Kat Ellinger, Diegan’s co-host on the Daughters of Darkness podcast, provides a similarly impressive commentary for Zotz! 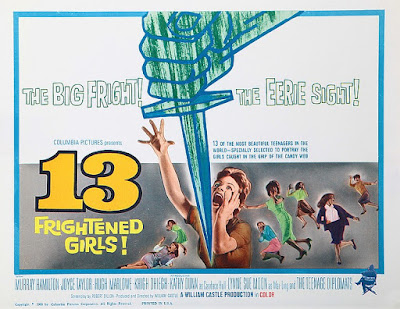 I have only one little quibble with this set. Due to licensing agreements, the Strait-Jacket disc in the set is Region B only. I’m guessing that is why Amazon is currently selling the set at half price. Now, most serious film fans I know own a region-free player… but let the buyer beware. This may be a deal breaker for many. Don’t let it be you. Maybe this box set can be the final push you need to invest in a region-free player. If anything, the extras and the transfer on the Straight-Jacket disc are the best of the four! (At this point, a six-inch-tall JB, dressed as the DEVIL, sits lightly on your shoulder and begins to whisper in your ear, “What are you waiting for? You know you want it…”)

You know that you do… 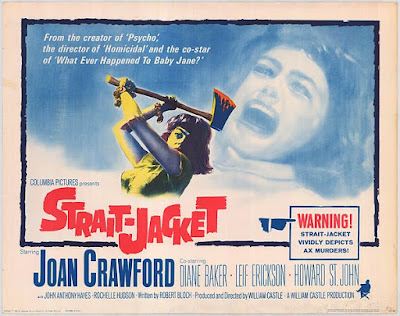 It is very difficult for any film critic to turn off the “This is the guy who wired theater seats to shock people” rhetoric when discussing William Castle. (Look, I’m doing it myself right now.) Clearly, his gimmick films of the 1950s will be his legacy. What this second box set does is ask us to consider Castle’s career post-gimmick. (Though he reneged on his promise to Joan Crawford to forgo the gimmicks for Strait-Jacket by distributing tiny cardboard axes at many screenings.) This second box set is full of insight about the man who, after all, read the galleys of Ira Levin’s Rosemary’s Baby before it was published, purchased the rights, and produced the film. Castle wanted to direct the film as well, but Paramount Pictures head Robert Evans insisted on Roman Polanski.

I would love to see the William Castle-directed Rosemary’s Baby. What on earth would have been his theater gimmick for THAT one? 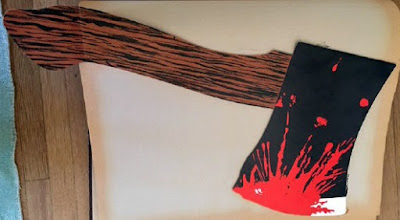 This second box set reveals Castle as a shameless trend follower. Someone once said of William Shakespeare that he was a master storyteller, provided that someone else told him the story first. The same can be said of Castle. His love of Henri-Georges Clouzot’s Les diabolique leads directly to his famous run of 1950s horror movies. Alfred Hitchcock’s Psycho (itself influenced by Les diabolique) “inspires” Castle’s Homicidal. The success of both Psycho and Whatever Happened to Baby Jane? leads to Strait-Jacket. The huge success of Disney’s The Absent-Minded Professor in 1961 leads to Castle’s carbon copy, special effects-driven family comedy Zotz! in 1962. Like the carnival barker he was at heart, Castle never met a successful trend that he couldn’t exploit. The story goes that when Robert Aldrich’s Whatever Happened to Baby Jane? was released in 1962, Castle saw it 17 times! 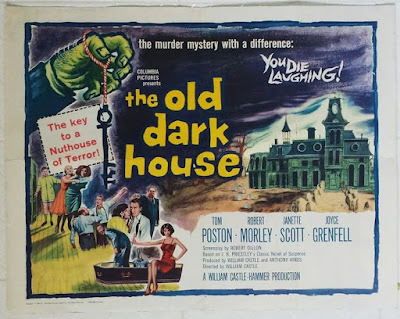 I really can’t remember the last time I had this much fun with a retrospective box set of a filmmaker’s work. If the Strait-Jacket Region B situation is no impediment to your viewing, I urge you to seek out this set.

Also, I implore Powerhouse to put together ONE MORE Castle box—we’ll call it William Castle: Alpha Omega. ARE YOU LISTENING, POWERHOUSE GANG? We desperately need one more William Castle box set, with transfers and extras that are up to the high standards of the initial two sets. This third box should include Macabre, Castle’s first gimmick horror film from 1958; The House on Haunted Hill from 1959, my favorite Castle film (no need to include an inflatable skeleton so home viewers can re-enact Emergo!—if they’re buying this box, chances are they already OWN an inflatable skeleton); I Saw What you Did from 1965; and Let’s Kill Uncle from 1966. Samm Deighan mentions the last two films in her 13 Frightened Girls commentary, and what she says about them has me dying to see them. Let’s get a Kickstarter going for this! Where can I send my money?

Powerhouse, GET ON IT!