A few quick thoughts on my most anticipated Blu-ray release of the year.

When Scream Factory originally announced this release, it was called The Karloff and Lugosi Collection. I would love to know what inter-office intrigues and shenanigans lead to Scream Factory renaming the set The Universal Horror Collection, Volume One. Did Universal Studios, which is allowing Scream Factory to release these old chestnuts, insist on the change, looking to bolster its brand image as the House of Horror? Did the famously litigious Lugosi and Karloff families have anything to do with the title change? Was Scream Factory looking to start a series, given that Volume Two has already been announced and will contain four more films, none of which star Boris or Bela?

The world may never know. 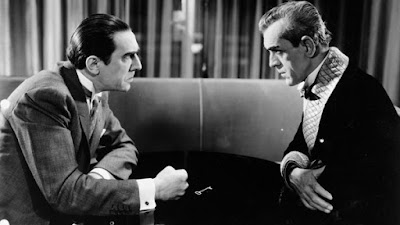 The contents of this new collection are almost the same as Universal’s previous DVD release, The Bela Lugosi Collection, except that Murders in the Rue Morgue, which only featured Lugosi, has not been included. Universal also released these exact four films on DVD as Boris Karloff & Bela Lugosi 4-Movie Horror Collection in 2018. Then, perhaps feeling that the rag has been wrung out, Universal allowed Scream Factory to take a crack at a release.

That’s great news for fans, because Scream Factory cares more than Universal about giving these films the attention they deserve. In this iteration, we finally get new transfers and lots of new bonus features for The Black Cat (1934), The Raven (1935), The Invisible Ray (1936), and Black Friday (1940).

The Plots in Brief: In The Black Cat, Bela Lugosi’s Dr. Vitus Werdegast seeks revenge against Boris Karloff’s Hjalmar Poelzig; Poelzig did unspeakable things to Werdegast and his family and now Werdegast wants to do unspeakable things back. (How unspeakable? When Universal Studios president Carl Laemmle returned from a trip and saw the finished film, he insisted on reshoots to soften it and vowed that writer/director Edgar Ullmer would never work at his studio again.) Lugosi is also frightened of cats, and Karloff is the high priest of a Satanic cult!

In The Invisible Ray, Karloff’s Dr. Janos Rukh glows in the dark and does unspeakable things to everybody. Lugosi’s Dr. Felix Benet tries to help Rukh be slightly more speakable, or at least slightly less unspeakable.

In Black Friday, Karloff’s Dr. Ernest Sovac does unspeakable things to Stanley Ridges’ Professor George Kingsley. Bela Lugosi plays Eric Marnay, a secondary gangster. This part is so small that Karloff and Lugosi have no scenes together! It is no wonder that Black Friday is considered the lesser of these four films. 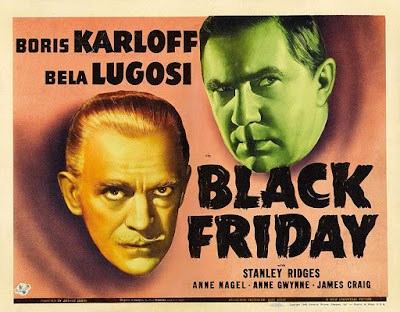 Do these plots all sound vaguely similar? Well, they didn’t call Hollywood “The Dream FACTORY” for nothing. We are not here to be amazed and amused by unique narratives, we are here to enjoy the performances of these two acting GREATS. As I have mentioned countless times on this website, Karloff was a terrific character actor and Lugosi… was from fucking outer space. Lugosi is always crazy great, always intense, steals every scene, and never ever just phones it in. Lugosi is the living embodiment of the old Thespian motto, “Play well your part. In that, all honor lies.”

God bless Scream Factory for reissuing these classic films with taste and style. While other studios are bemoaning the death of physical media, Scream Factory continues to be the collector’s best friend by investing in actual disc releases and by commissioning tasty new bonus features. The Universal Horror Collection Volume One includes six newly-recorded commentary tracks (two apiece for The Black Cat and The Raven); a new documentary by Constantin Nasr called A Good Game: Karloff and Lugosi at Universal, which is split into four chapters across the four discs; a new featurette, Dreams Within A Dream: The Classic Cinema of Edgar Allan Poe; an audio recording of Bela Lugosi reading “The Tell-Tale Heart;” an episode of the Inner Sanctum radio series featuring Boris Karloff; the film trailers; and still galleries. This is an embarrassment of riches. 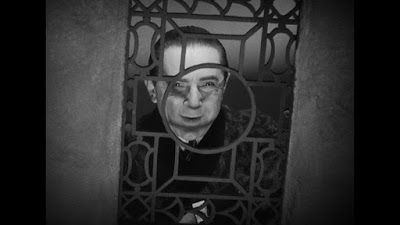 The transfers here are delicious. Scream Factory did a new 2K scan of the original film elements for every film except The Black Cat, which probably accounts for the fact that The Black Cat looks worse than the other three. Even though I found the transfer on The Black Cat to be a tad soft and grainy, I’m convinced that it’s still the best this film has ever looked on home video. I’m at the point now where regular exposure to miraculous transfers leaves me expecting a miracle every time. The Black Cat is a relatively obscure, 85-year-old film. It looks FINE. The other three films look better than fine, though I noticed that the second half of The Raven looks much better than the first half. Does Universal have better source materials for some reels of The Raven than it does for others? 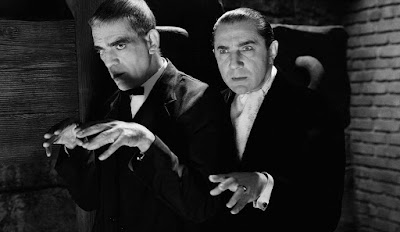 Taken together, the commentaries and documentary do a wonderful job explicating the two actor’s careers and relationships and indeed the history of the horror film at this time. I had always assumed that the “Golden Age” of Universal horror films came to an end because each individual monster series had exhausted itself with too many sequels and because of the coming of WWII. The bonus features in this set explain that England’s near-ban on horror films in the mid-1930s was the true end point of the first monster cycle. The Invisible Ray represents Universal trying to forge a genre that was more acceptable to both non-horror fans and the English, including more thriller and science-fiction elements. The fact is that the studio didn’t make any horror pictures for three full years!

At the end of the 1930s, a cash-strapped Universal re-releases a double feature of the original Dracula and Frankenstein, which breaks box-office records. Horror is marketable again, and this paves the way for the second half of Universal’s golden age of monsters: Son of Frankenstein, Tower of London, The Invisible Man Returns, The Mummy’s Hand, Man-Made Monster, The Wolf Man, The Ghost of Frankenstein, The Mummy’s Tomb, Frankenstein Meets the Wolfman, the color remake of The Phantom of the Opera, and many, many others.