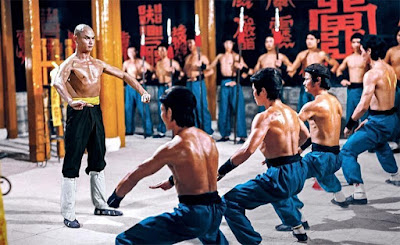 I don’t care that Junesploitation is over; this movie kicks ass.

Master betrays his clan, goes into hiding. Many assassins are sent to kill him, but their success... varies. 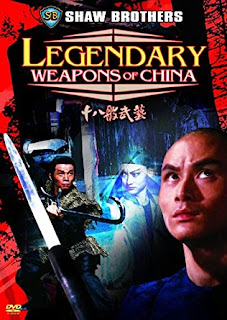 One of the best and more unique aspects of the movie is combining the magical with the martial arts. Magic, in this movie, looks like fighters disappearing behind black capes and smoke bombs, mind control, and voodoo. The narrative explanation for this “magic” is an adherence to martial arts philosophies to the point of religious fervor. For instance, Gordon Liu’s character has trained his disciples to withstand steel blades, and is moving on to bullets, while another can hypnotize with just a look and then control his victim’s bodies. It makes for some unique and engaging fight sequences, since characters disappear or use sleight of hand to gain an advantage, and use weapons or gadgets more often than straightforward brute strength. An example of uniquely used weaponry is when one character shoots a rope dart for a kill, but his opponent fires off a mini-bladed rocket to parry it.

Each of the “legendary weapons” gets introduced like a character, complete with a little title card and a freeze frame (my personal favorite is the three section staff), all ultimately highlighted at the end in the climactic end battle. What helps with those weapons is a really deep bench of martial arts talent, going at least 6 deep in terms of principal characters, including the director Lau Kar Leung, Chia Yung Liu, Kara Wai, and the great Gordon Liu. Kara Wai in particular is awesome as an undercover agent trying to discover the hidden master.

Out of the many, many weird parts of this movie I love is a segment about midway through involving a character named Wu. To take advantage of the disappearance of the master who has betrayed his clan and gone into hiding, Wu pretends to be this master, and his gang of co-conspirators attacks him in a public place, to impress the populace and extort money from them. It’s an extended sequence that last for almost ten minutes, Wu fending off his “attackers” using parlor tricks and faux martial arts; I love that it satirizes what the “real” martial artists are doing in the story. The clan who is hunting down the master who betrayed them is only doing it because his departure makes them lose face to the public, which means less new members, thus less money. It highlights the false pretense behind their concern about the master’s betrayal; it’s not about integrity, but money. As the story unfolds, the motives for the master who ran away turn out to be the truly principled one, and the strength of his kung fu upholds that, without any tricks.

Did this make sense back in the '80s? 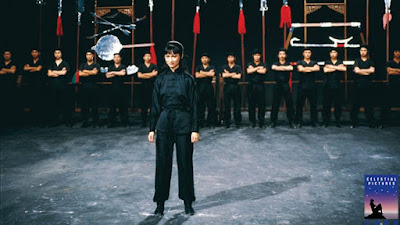 Kara Wai’s character is “disguised” as a young man for much of the story, although the disguise would only work on those with extremely poor vision. My disdain for the “dressed as the other gender” conceit is outweighed by my joy when the ridiculous “oh my gersh, she’s a GURUL!!!!!!” reveal inevitably comes later.

Religious hocus pocus - in one of the earliest scenes, a young disciple of the clan is involved in a spiritual ceremony where he ends up putting out the candles with his kung fu, and then bites off and eats the extinguished candles. I know there’s cultural context I’m missing here, but it looks full-out crazy. Gordon Liu is also admonishing members of the same clan to use their kung fu to survive gunshots. It goes… about as well as can be expected.

I’ve seen hypnosis in martial arts movies before, but this feels like the first time I’ve seen voodoo body control. There is a particularly engaging segment of voodoo where the main villain wishes to fend off Wu and his gang of charlatans, which involves a slapstick parade of hiding, mistaken identities, outhouses, and sewage ponds. It feels like I’m making a case for Wu and his gang to be the secret MVPs of this movie.

Best image on the internet 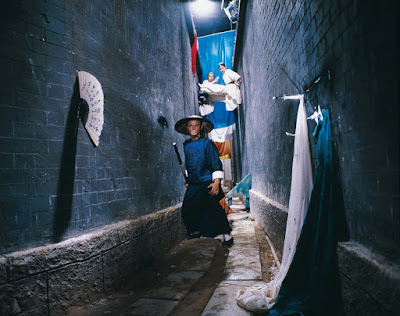