The review duo who just can’t wait to be kings.

Adam: In honor (?) of Disney’s much needed (?) live-action (?) redo of The Lion King, we’re each selecting three live-action Disney films from the 1990s that we’d want to turn into animated features. Isn’t that a cooler idea than live-action remakes of beloved animated features where you have nowhere to go but down in quality?

My first pick is 1991’s The Rocketeer. The live-action version of this movie is solid to begin with, but after seeing last year’s Spider-Man: Into the Spiderverse, I think The Rocketeer would be rife for a similar re-interpretation in that style of animation. The same could be said of Dick Tracy, but that’s from Touchstone Pictures so it doesn’t count for the purposes of this column. I can already see how visceral the flight sequences in The Rocketeer would be when translated to the Spiderverse style of animation. They would need to keep Timothy Dalton, though, as the voice of Neville Sinclair. He’s got animation pipes. I’m cool recasting Billy Campbell because Chris Pine is my Jack Ryan and now he can be my Rocketeer. 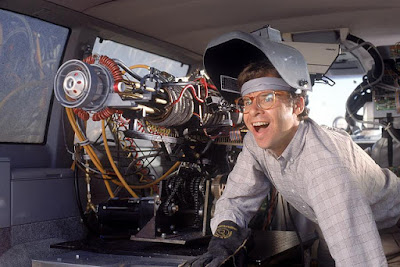 Rob: The Rocketeer was on my list, too. Such a great choice. I so, so want to see the Daltonator interpreted in that punk rock graffiti Spiderverse style. Speaking of Joe Johnston (sort of), my first pick would be Honey, I Blew Up the Kid. Obviously, I prefer the first film in the Honey Cinematic Universe, but since we’re only doing ‘90s films, the sequel will suffice. Rick Moranis has such a characicaturizable (?) face, and while the series was generally considered a benchmark in visual effects, the animated medium would definitely allow for some truly impressive and imaginative work. Fun fact: Brian Yuzna and Stuart Gordon worked on the original film. Wouldn’t it be great to see Re-Animator-esque gore in animation?

What’s next for you?

Adam: Solid pick! I revisited Honey, I Shrunk the Kids a couple of years ago and it barely held up (though it had ‘89 charm), so I didn’t proceed with rewatching the sequel. I’m thinking this animation spin on Honey, I Blew Up the Kid could modernize it in a cool way. I would love it too if Disney released an animated Blew and everyone was confused why they didn’t start with Shrunk. That would be baller. 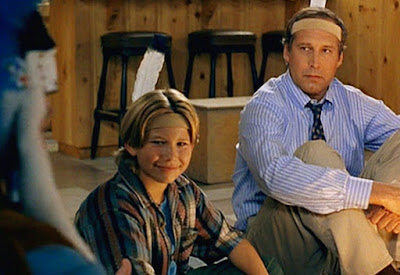 My next pick is a purely selfish one, because I’m coming from a place of my own fandom and not for the greater good of cinema. I’m choosing Man of the House. The 1995 family comedy starring Chevy Chase, Jonathan Taylor Thomas, and Farrah Fawcett is inarguably a stone-cold classic, but it’s also a bit flat and modest by today’s standards. Nevertheless, I used to love this movie because it had a lot of outdoors stuff and activities. I heard once (I think it was from Roger Ebert) that movies fill in the cracks of your life -- i.e they help you vicariously experience what you’ll never be able to in your own existence. My childhood was lacking in outdoors stuff and activities. My family activitied a bit, but we never went full throttle (I want to sleep in a tent!) and I regret dropping out of Cub Scouts when I did. I didn’t think it was cool anymore and I’ve been pretty much lost ever since because that’s the day I sold out. Man of the House (1995) has lost some of its luster over the years because people confuse it with Man of the House (2005) starring Tommy Lee Jones. I want to see Disney bring House back animated style with the big dick energy I know it has. And I want Tommy Lee Jones to take over the part of Chevy Chase, partly because I think the casting works and partly to stick it to the 2005 version.

Rob: I have fond memories of Man of the House, but I have to admit I haven’t watched it in forever. This would be a great opportunity. My next pick feels like such a cheat, but actually checks out by the rules of our premise. It’s David Lynch’s The Straight Story. Could you imagine the late, great Richard Farnsworth and Harry Dean Stanton animated in David Lynch’s surrealist style? They both had maps of the world on their faces that would make great caricatures. I would love to see how Lynch interprets the film’s beautiful landscapes through animation. You know he’d get weird with it — he’d probably do it in sculpture or pastels, or something like that. Maybe just a series of lights turning on and off. Who knows? We’d have to recast the roles, obviously. Maybe Sam Elliott as the voice of Alvin Straight? Ian McShane as his brother, Lyle? We can think about it. I would just love to see Lynch get Disney to pay for a big, weird art project. 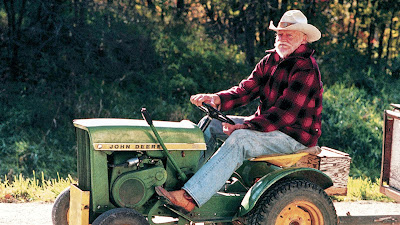 Adam: This is blasphemous, but I’ve never seen The Straight Story. I remember people renting it when I worked at Blockbuster and expressing unanimous delight about it. It’s on my list. For some reason, when you chose The Straight Story I pictured it animated in rotoscope like Waking Life or A Scanner Darkly. Disney would never do that, though.

My last pick is The Santa Clause. This is sort of an obvious choice since there have been vast amounts of animated films involving Santa Claus, but I’d really like to see Disney re-do the Tim Allen classic (Is it a classic?) in animation because the North Pole looks so shitty in those movies. Also, I’m sure the animated version would dial down all of the adult themes (child custody, court proceedings) that make The Santa Clause a bit of a drag. I would want to re-cast Tim Allen at this point since he’s kind of a tool man. I’ll go with Cole Hauser. I would pay $100 to see The Santa Clause animated with Cole Hauser as Scott Calvin. And Ben Affleck in the Judge Reinhold part. Basically, I just want to re-do The Santa Clause animated with the cast of Dazed and Confused. Wiley Wiggins plays the kid and he’s always scoffing and pinching his face like he did in the Linklater movie. 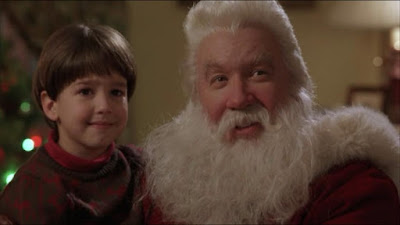 Rob: Love it. Who’s playing Bernard the elf? Need someone who’s both whimsical and authoritative. My vote is for Letitia Wright. Speaking of Tim Allen, my last pick is 1997’s Jungle 2 Jungle. Allen plays a New York businessman who discovers that his ex-wife — who has lived in a Venezualan jungle since their divorce — has been raising their 13-year-old son in secret. Cultures clash when Allen attempts to adapt his son’s tribal sensibilities to the big city. I haven’t rewatched this one in forever (I guarantee it’s #Problematic in 2019), but it’s a childhood favorite that I’d love to see adapted. Do you have those movies that helped you across the gap from childhood into adolescence? Mimi-Siku’s (Sam Huntington) relationship with Leelee Sobieski’s character was big for me, in that respect. It was innocent, but also forbidden. I’m thinking Bradley Cooper for the Tim Allen part? We could gender flip Mimi-Siku and go with Zendaya. This is going to sound odd, but I’d actually like to see this one as a Wes Anderson-y stop motion adventure. I think it would be fun. 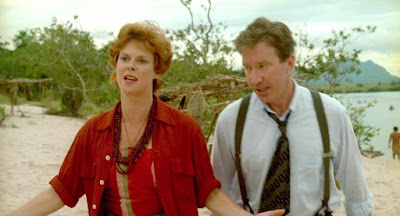 What live action Disney films would you like to see animated? Leave them in the comments. We’ll be back next week! Until next time…