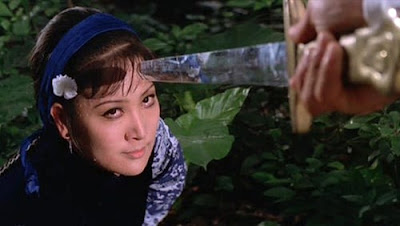 We've come to the end of another Junesploitation, and it was arguably our biggest yet. Between everyone watching and commenting here on the site and on Twitter, it felt like we had more people participating and more movies watched than ever before. Thank you all for making this goofy idea such a success.

Despite being a busy month for us here -- as I know it was for so many of you -- Erika and I managed to watch at least one movie every day, and sometimes more than one. We mostly tried to stick to first-time watches, but there were a few repeats thrown in (Shag for Teenagers! day, The Parent Trap for Kids! day [a first time watch for me, a repeat for E], Burying the Ex [a first time watch for E, a repeat for me], etc.). We must have done a better job curating together than I have in the past, because there were very few duds. Here are some of my favorite discoveries for the month. 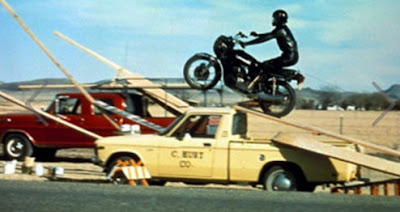 Our Cars! day pick (recorded off of TCM) is a cross-country race starring Michael Sarrazin, Gary Busey, Joanne Nail, Tricia O'Neil, and a scene-stealing Raul Julia as the world's greatest Italian lover. This is the movie that made me realize I'm a fan of the cross-country race movie (a genre that also includes Cannonball!, It's a Mad, Mad, Mad, Mad World, both Cannonball Run movies, and Rat Race) and might have been the most purely entertaining new-to-me movie that we watched all month. 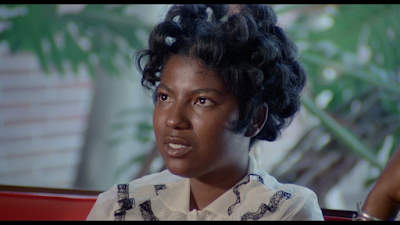 Jamaa Fanaka's first movie, Welcome Home, Brother Charles, is one of my favorite exploitation movies ever made. I was excited to see his follow-up, included as a bonus feature on the WHBC Blu-ray from Vinegar Syndrome. Emma Mae (aka Black Sister's Revenge) stars Jerri Hayes as the title character, a Southern girl who moves in with her extended family in Los Angeles. When the guy she starts seeing is arrested and jailed, Emma plans a daring bank robbery to raise the money to get him out. The movie has a real sense of authentic time and place, and is a great example of the kind of "gear shift" movies I always really like. 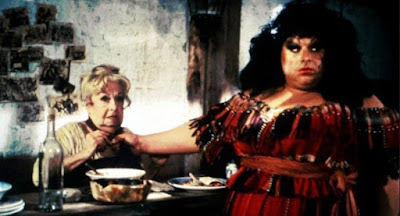 I've yet to see a Paul Bartel movie I don't like. This one, recently released to Blu-ray from Vinegar Syndrome, reunites Divine and Tab Hunter (along with Geoffrey Lewis and Lainie Kazan, for a story of dancing girls, gunmen, and outlaws all angling for lost treasure. The joke of the movie is that all the actors play high camp totally straight. We originally wanted to watch this for Westerns! day but the order didn't come on time, so I'm thankful that we got to catch up with it as a Free Space. I'm excited to hear that Kino has just announced Not for Publication and Scenes from the Class Struggle in Beverly Hills. 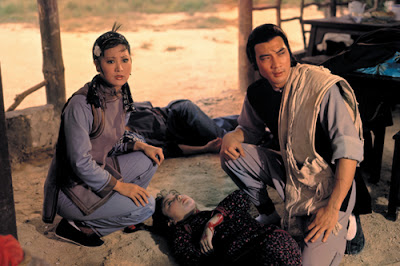 Thanks to @A Casual Listener for recommending this one on kung fu day, as there are way too many titles on Amazon Prime from which to choose. The fighting is pretty good, the two main characters are really strong, and there are some surprising twists in the story. As ACL pointed out in his review on the day, it's also surprising to see a kung fu movie with nudity. This one ticks multiple Junesploitation boxes!

This is not a good movie. The directorial debut of Glenn Danzig was the opening night film of this year's Cinepocalypse festival, and I had no idea what to expect. I couldn't have expected this. In no way is Verotika a "good" movie, but it certainly represents a singular vision -- one executed with an Ed Wood level of both passion and competence. I stuck with it, taking it seriously, as long as I could -- well past when the rest of the opening night audience had devolved into ironic laughter. At a certain point, though, even I couldn't help it anymore. And while I don't believe in "so bad it's good," I can't deny "so bad it's entertaining." That's Verotika. I really hope this is out on Blu-ray by October so we can watch it as part of our annual Scary Movie Night.

Thanks to everyone for a great Junesploitation! Just 12 weeks to #ScaryMovieMonth!
Posted by Patrick Bromley at 5:00 AM