Yes, I am back after a fitful June vacation from this column. It was a June full of exploitation movies, new releases courtesy of Warner Archive and Shout Factory, and audio commentaries. Lots of audio commentaries!

Today, I want to talk about four recent releases—Warner Archive’s Frankenstein 1970 and Shout/Scream Factory’s Monolith Monsters, Alligator People, and Monster on the Campus—but not in terms of the films themselves. All four films are tons of fun, all four of the new transfers are revelatory, and all four films belong in any self-respecting Monster Kid’s movie library. All four films also feature newly recorded audio commentaries, and those are what we will discuss here. 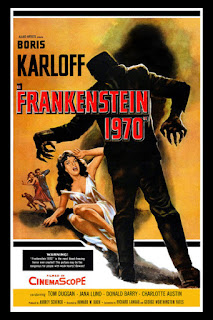 Am I the only one left who listens to these things? I would love to hear our readers and listeners weigh in on these value-added bonus features. I am old enough to remember the original appeal of the audio commentaries on the first Criterion Collection laserdiscs.* I spent many an afternoon enjoying Ronald Haver’s astounding commentaries for King Kong (the first audio commentary ever recorded) and Singing in the Rain, John Singleton’s commentary for his own Boyz in the Hood, and Francis Ford Coppola and his son Roman’s commentary for Bram Stoker’s Dracula. Besides amazing image quality, better sound, and letterboxing, audio commentaries were a big part of what got me hooked on laserdiscs, back in the late 1980s. (“Here he goes again—yeah, Grampa, we’ve heard this all before. You’re an ‘early adopter’ GENIUS.”)

I am guessing that we have all listened to our share of outstanding commentary tracks (John Carpenter teamed with Kurt Russell, anyone?) and dreadful commentary tracks. One would think that, by this time, the professionals tentatively sticking their toes into the public swimming pool of audio commentary track recording would have listened to some exemplary tracks, done their homework, and learned some basic rules for being… well, listenable. “What are those rules?” you may ask. Well, I am glad you asked.

RULE ONE: DO NOT DESCRIBE WHAT IS HAPPENING ON SCREEN.

That’s pretty much it.

Of the four we’re discussing here, Frankenstein 1970 features the best audio commentary, probably because it stars author extraordinaire Tom Weaver, Monster Kid extraordinaire Bob Burns, and Charlotte Austin, who costars in the film! This track is one part history lesson and one part cocktail party. While clearly recognizing the film’s deficiencies and Karloff’s shameless overacting, the trio look on the film with real affection and Austin conveys, better than I have heard anyone else articulate, what it was like to be a working actor at this time. Pop some corn, pour yourself a martini, and listen to this delightful commentary; you can pretend that you were invited to this party. 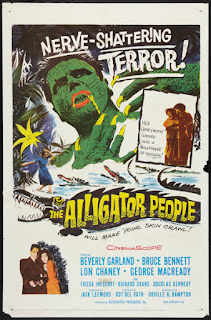 Alligator People features a commentary by The Monster Party Podcast crew: James Gonis, Shawn Sheridan, Larry Strothe, and Matt Weinhold. I was not familiar with this podcast before I watched this disc, but what a terrific job the four of them do here. By turns academic, historic, fan-boyish, and hilarious, these four manage a delicate juggling act by changing the focus every few minutes without sliding into goofiness, repetition, or silence. This is a model of what a “gang” commentary should be. Bravo, gentlemen! When discussing costar Beverly Garland, Gonis, Sheridan, Strothe, and Weinhold even mention the Garland hotel she built in Hollywood, the very same hotel where my lovely wife and I have often stayed when we visit Hell-A. I also learned that Alligator People was only made because 20th Century Fox didn’t think its sequel to The Fly, 1959’s Return of the Fly, was strong enough to play alone: Alligator People was made for the express purpose of rounding out a double bill because… you all know… how alligators draw flies.

Monolith Monsters features a commentary by Tom Weaver, David Schecter, and Larry Blamire. I may be biased here because I am such a big fan of Weaver’s books and commentaries, but this is another great one. As he did on his previous commentary for Tarantula!, Weaver uses actor/director Larry Blamire to voice all of his interview subjects’ quotes. It lends the track a nice variety and keeps it from being an awkward recitation when Weaver quotes his own work. Monolith Monsters might be the silliest horror film from Universal’s Silver Age (the monsters, after all, are big rocks) but Weaver really brings an appreciation to the director, actors, and the use of Universal’s famous back lot. 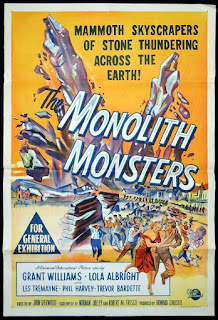 Monster on the Campus is cut from the same cloth as Monolith Monsters—it may not be a “great” movie, but the excellent new transfer on this disc cries out for adequate audio commentary support. Unfortunately, MoC’s audio commentary is a rare fail by the fine folks at Shout/Scream Factory. Tom Weaver is nowhere to be heard. Did you hear me? There’s NO TOM WEAVER. Boooooo! Instead, two separate commentaries—one from Dana Reemes (author of Directed by Jack Arnold) and another by Mark Jancovich (author of Rational Fears: American Horror in the 1950s)—both neatly demonstrate how to fumble an audio commentary by breaking every single rule on my single-rule list. Do these guys believe that people listen to audio commentaries without the movie? Did they think they were recording a book-on-tape?

Reemes was obviously chosen because he wrote a book about the film’s director, but the stories he tells about Jack Arnold are minimal. Jancovich, I hate to say, is unlistenable. It sounds as if he is writing his book in real time as he watches the film. Insights are slow in coming and are preceded by more pauses and “ummms” than I have ever heard on any other commentary track. Hey, I get it—I know I use plenty of errant interjections myself on the podcast and I’m WORKING ON IT—but I hope for the sake of his students that Jancovich doesn’t sound like this in a lecture hall when he is teaching. His is one of the rare commentary tracks that I could not finish.

(Mark Jancovich also does the second commentary track for Monolith Monsters. I’m still too scarred by his Monster on the Campus track to listen to it. Shout Factory must have signed him to some sort of “Two For One” deal.) 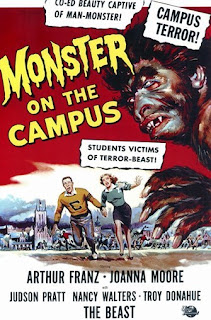 Well, kids, three out of four ain’t bad! In all of your Junsploitatin’, did any of you hear any particularly revelatory or risable commentary tracks? Share in the comments below.

*Speaking of the Criterion Collection, you are all aware that the annual Barnes and Noble 50% Sale started last Saturday? Swing Time, Blue Velvet, and A Face in the Crowd are not going to buy themselves, you know!
Posted by Patrick Bromley at 5:00 AM