Reserved Seating Swings for the Fences: THE BAD NEWS BEARS (1976) 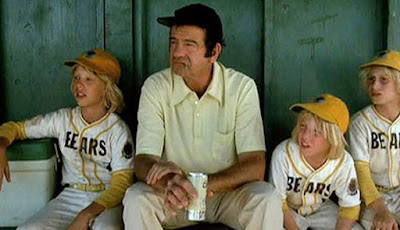 The review duo who can take their apology and their trophy and cram it up their ass.

Adam: Our baseball series returns this week with a deep-dive on a baseball classic, director Michael Ritchie’s The Bad News Bears, starring Walter Matthau, Vic Morrow and Tatum O’Neal. This is a quintessential rag-tag kids sports film with Matthau playing the team’s coach, the awesomely-named Morris Buttermaker, a former semi-pro ball player who’s long washed up and now makes a living cleaning pools when he’s not drunk on endless cans of beer. Buttermaker gets the opportunity to coach the worst team in the local little league, the Bears, who consist primarily of athletically challenged misfit kids with short tempers. The team improves throughout the season with the additions of O’Neal (as Amanda, an ace pitcher and Buttermaker’s ex-girlfriend’s daughter) and Jackie Earle Haley as Kelly Leak, a motorcycle riding juvenile delinquent who also happens to be a gifted ballplayer. After getting creamed on opening day by the rival Yankees (coached by Vic Morrow), the Bears and Yanks showdown in the final game of the year with the league championship on the line.

The Bad News Bears is a movie I began watching over and over in college with one of my fraternity “brothers.” We were instant fans of the film and adored spitfire shortstop Tanner Boyle (Chris Barnes), who Wikipedia exquisitely describes as having a Napoleon complex. This watch was my first in maybe ten years and I quickly remembered why I loved it so much. It’s undoubtedly (for me) one of the best baseball movies ever made. It gets the team dynamic down so well, it’s hilarious, and the performances by Matthau and the entire cast are aces. No one plays down to the material. What struck me most this viewing is how deep the film was in a subtle way. There’s a lot of collateral emotional damage happening in this film, with adults saying and doing things to these kids that will probably stick with them well into adulthood, and the movie is very matter-of-fact in those moments. That’s how life is. There usually isn’t some conciliatory speech after a grown-up does something awful (e.g. throwing beer in a kid’s face, telling a kid to get hit by a pitch because he’s bad, etc.); it’s just something that happens and is remembered. The movie isn’t exactly serious, but those uncomfortable moments do give The Bad News Bears a certain amount of weight that a similar movie (The Mighty Ducks is an example) doesn’t have. We should also point out that the movie has some very ugly dialogue and attitudes that are jarring when viewed in today’s lens. It’s pretty startling how casual racism and sexism was back in 1976, even among children. Not that it’s all that much better in 2019. Again, that’s not the takeaway from this movie -- it’s ostensibly a kids sports comedy and succeeds as that -- but I know we’d be remiss not acknowledging it. 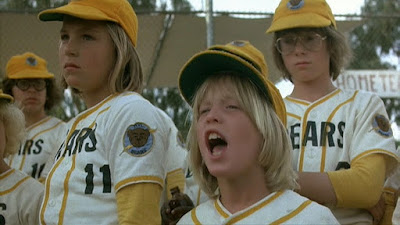 Rob: Before we go much further, we should direct everyone to the great piece on the film that Heath Holland wrote last year as part of his “Back to ‘76” series. Did you read it? Great. Welcome back. I agree that The Bad News Bears is a stone-cold American classic. I doubt I’ll get a ton of pushback on that. But the real revelation for me on this viewing was that Walter Matthau’s performance as Morris Buttermaker is — no bullshit — one of the best of the era (era). It’s not a complicated role, for sure, and I hesitate to be so needlessly hyperbolic, but Matthau is just the most charismatic curmudgeon to grace the screen since Humphrey Bogart. Is he sexy? I think he might be sexy. He has such an easy chemistry with everyone, this amazing ability to meet every single person he interacts with on their level and find a way to connect. From his perspective, we’re all just working stiffs trying to make our way. That’s the heart and soul of this movie. That’s why it works so well. Watching it now is this incredible reminder of what movies used to get away with and who could earn the chance to be a movie star in 1976.

And yes, The Bad News Bears is problematic for 2019. It’s flat-out horrifying, in some respects. Like, Blazing Saddles-level problematic. Your racist uncle would say this movie “tells it like it is,” which speaks more to how screwed-up our national psyche was forty years ago than it does to an appropriate mode of social behavior. N-words and s-words and f-words galore! Testicular assault! Child abuse and functional alcoholism! And it’s rated PG! However, reprehensible though it may be, I have to give this movie credit for doling out its lack of fucks in a (relatively) family-friendly way. It’s grimy without being mean-spirited. It’s brutal without being violent. The only real word for it is “honest.” This movie is honest about what it is and what it wants to say. I wasn’t born when it came out, so I’m not going to rhapsodize about the good old days when men were men and movies were movies, but I love that The Bad News Bears minces no words and pulls no punches.

Is that a good thing? It is if you can appreciate how progressive and socially-conscious the movie actually is, underneath it all. It’s constantly addressing economics, race, and inequality. Everything from the coach telling his all-white Yankees team that they have they “look” of champions to the schlubby Buttermaker getting Chico’s Bail Bonds to sponsor the Bears’ uniforms. Even the whole idea of Whitewood suing the league to allow his son to play ball feels like something a lesser film would spend time demonizing as liberal hippie enabling. Instead, Buttermaker (and therefore the audience) doesn’t turn against Whitewood until he threatens to pull the Bears out of the league. You start something, you finish it. Simple. Or hell, look at Buttermaker’s scene with Ahmad, the team’s only black member: The Hank Aaron-loving kid is horrified by his performance on the field and laments that, while his brothers are all star athletes, he’ll never be one. Buttermaker focuses on baseball and tells him about the season Aaron committed forty-two errors and kept on playing. He doesn’t lean on the race issue. He’s not talking about Aaron as an African-American hero and how Ahmed has a responsibility to live up to that legacy. That doesn’t factor in for him. He’s pragmatic. He speaks on Ahmed’s level. Ahmed is a ball player, and so is he. He treats him like an adult and lets him make the decision to keep playing for himself. It’s just one example of how progressive The Bad News Bears’ apolitical approach ends up being.

Speaking of Ahmed, which kid performance stood out to you most? 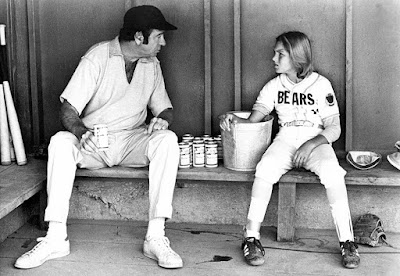 Adam: That’s a tough question because so many of them are great. My mind immediately went to the catcher, Mike Engelberg (Gary Lee Cavagnaro). I love that he’s always ticked off at something, plus I love the moment where he jumps a fence and is so put out by the experience that he begins eating a chocolate bar (wrapper and all). It’s hilarious. I also laugh really hard after Ahmad gets hit in the nuts and a stretcher is brought out. I think it’s Tanner who says “He needs a stretcher for his balls?” with perfect delivery. I really wish this group of kids were later cast as the teens in Jaws 2. I just want to see Tanner call the shark a “chummy crud” tell it to “go back to your salt water” and jump on top of him throwing fists when the Great White drags Kelly Leak away.

Rob: I’m now extremely angry that we never got The Bad News Bears Meet Jaws. I want to see Buttermaker try to pilot a boat out to Cable Junction. Anyway, the kid performances are great, as you said, but my nerd heart always goes out to Ogilvie (Alfred W. Lutter). He’s perfectly content not to play and just wants to keep the books, eventually becoming Buttermaker’s right hand man. There’s pride in that. That was definitely me as a kid. I also really love seeing the variety of child acting styles in The Bad News Bears: Some of them rush their lines before they forget them, some of them try to do it cutesy, and some (like O’Neal and Haley) are all attitude. There’s so much to choose from.

Adam: Did you ever watch any of the sequels or the remake with Billy Bob Thornton? I saw the remake directed by Richard Linklater. I didn’t like it because BBT played the part like he did as the lead in Bad Santa. I think the difference (and an important one) is that Matthau knows he’s an asshole but feels bad about it (knowing it’s just the way he is) while Thornton seemed to enjoy being a dick. 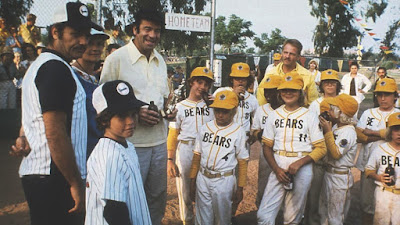 Rob: I haven’t seen it since it was released. The whole Bad Billy Bob schtick never really worked for me, so I doubt I’ll be revisiting it anytime soon. The last thing I wanted to talk about was the ending. You joke about it up top, but I genuinely enjoy the way The Bad News Bears doubles-down on the Rocky ending before spitting right in its face. Not only do they lose the championship game, but they reject the victorious Yankees’ gracious sportsmanship, throw the (laughably small) second place trophy in their faces, and go have a beer. It’s the ultimate commentary on the class issues I was talking about before, as well as the working schlub ethos Buttermaker has instilled in his team. We don’t need the man’s approval, they seem to say. We’re not looking for moral victories. We’re here to be bad news for our opponents.

Anything else to cover in The Bad News Bears? Would you say it’s in your top five baseball movies? It’s definitely in mine.

Adam: Yeah, it’s top five definitely. I read an interesting bit of trivia about the ending. Apparently they shot an alternate ending where Kelly Leak scored and the Bears wound up winning the game. 1970s test audiences (ever on brand) didn’t like the ending because they felt the underdog shouldn’t win at the end. Can we go back in time when movie audiences were this awesome and wise? Mark Ahn for me on The Bad News Bears (1976).

Adam: Next week, we’re back with our promised review of “Costner Dog.” aka The Art of Racing in the Rain. Until next time…