Starbucks has broken out the Pumpkin Spice Lattes, derelict Toys ‘R’ Us locations are rising from the dead as Spirit Halloween Superstores, and Target is slowly (much too slowly) putting out that sweet, sweet Halloween merch. This can mean only one thing…

Is it just me, or is the Halloween season starting early this year? Sure, Michael’s started putting out its autumnal stuff in July, but that’s only because the crafters need a head start with their knitting needles and glue guns and whatnots. For the first time, my local Spirit Halloween Store opened in August! Twitter is abuzz with freaks like us, just wanting Scary Movie Month to begin. Could it be that the world itself has become so awful and ridiculous that we are all pining for the respite of Spooky Time, when we can ignore the world-at-large for thirty-one sweet days and focus on monsters? I think I’m on to something. Next year with the national election in full swing, look for Halloween season to start in April or May. Why not?

What few physical media companies we have left will continue the tradition of obliging us each October with delightful scare fare. This October, we have an embarrassment of riches coming down the gravy pipe, and this column will briefly discuss the new releases to which I am most looking forward.

Spelling Entertainment will release The Stand TV miniseries on Blu-ray disc for the first time, promising on the packaging that it has been “brilliantly restored.” I’ve liked this book since I first read it in high school, and I’ve always had a warm spot in my heart for the miniseries. True, they couldn’t fit the entire epic novel into six hours, and some parts work better than others, but overall it’s an impressive attempt. If last week’s release of It: Chapter Two has you pining for more King adaptations, pick this one up.

Paramount will release a “20th Anniversary Edition” of Sleepy Hollow on Blu-ray. The digibook contains the full text of the original Washington Irving short story. The folks over at Home Theater Forum are not sure if this will be a new transfer, but they all agree the previous transfer was problematic. I really love this film and I’ve wondered why it didn’t get the attention it deserved when first released, although McFarland did come out with really cool action figures. The Ichabod Crane came with a little doctor’s bag stuffed with dozens of tiny implements. I’m going to wait and see what the reviews say about this one, but if it’s an upgrade, it’s a must-buy, even though the disc will be housed in an infernal digibook! 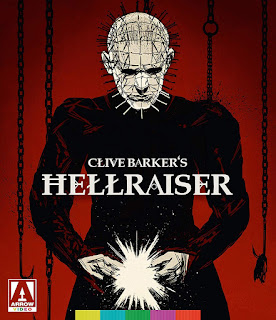 Arrow Video will release its special editions of Hellraiser and Hellbound on Blu-ray. Knowing the good people at Arrow, these transfers will be flawless and the extras will be definitive. I’m a little surprised that Hellraiser doesn’t come with a bonus “Your Suffering Will Be Legendary” Home Skin Peel Kit, but we can dream, can’t we? 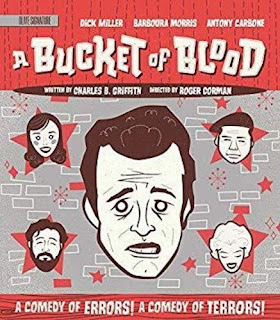 Olive Films will release an “Olive Signature Edition” of Roger Corman favorite A Bucket of Blood, starring Dick Miller. I once saw this on the big screen as part of an October horror marathon, and boy, did it play to an audience. This new version contains a wealth of extra features: a “making of” featurette; an interview with Dick Miller; an audio commentary with Elijah Drenner, director of the recent documentary, That Guy Dick Miller; an audio interview with screenwriter Charles B. Griffith; and lots more. This film is a perennial public domain eyesore, let’s hope Olive’s release is beautiful. 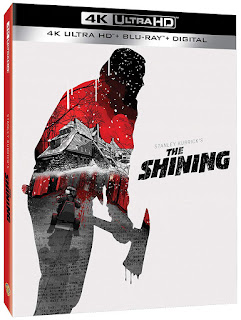 Gremlins, Zombieland, Pan’s Labyrinth, and Stanley Kubrick’s The Shining will all be released on 4K Blu-ray. I have really been enjoying many recent 4K releases, and have high hopes for this new batch. Figuring that no one has a 4K player in every room of the house, the video companies releasing these 4K chestnuts always include a Blu-ray disc of the film PLUS a digital code for iTunes or Movies Anywhere. At about $25 a pop, these are well worth looking into if you possess the equipment to watch them.

Universal continues to repackage the Master of Suspense with a new “House of Hitchcock” Blu-ray collection. I really like the Bates Motel “Do Not Disturb” sign, but $90 is a little steep for a slip of paper and 15 movies I already own: The Birds, Family Plot, Frenzy, The Man Who Knew Too Much, Marnie, North by Northwest, Psycho, Rope, Rear Window, Saboteur, Shadow of a Doubt, Topaz, Torn Curtain, The Trouble With Harry, and Vertigo. 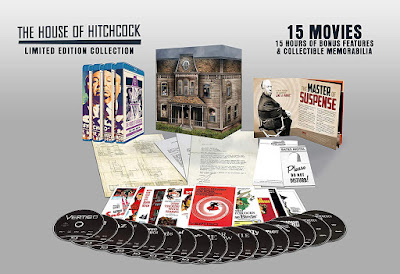 However, if you don’t already own these films, you could do worse. It contains some other paper ephemera, such as blueprints of the infamous Psycho house and art cards of the 15 posters. A worthwhile bonus in this set is all ten episodes of the Alfred Hitchcock Presents television series that Hitch directed himself. Don’t forget that it all comes housed in a sturdy cardboard box designed to look like Norman Bates’s home. You can easily make some little paper dolls of Vera Miles and John Gavin and pretend to murder them around this box. Fun!

Cinedigm will finally release Anna and the Apocalypse on DVD. A big favorite from last year, I don’t know why this release has taken so long or where the hell the Blu-ray disc is, but I’m happy to have this ambitious little film on physical media. A musical about high school and the end of the world, Anna was one of my nicest surprise-VOD-screenings last year. Ella Hunt should be in every movie.

Bereft of any tasty new releases. October 8th is a trick, not a treat.

Kino Lorber will release a new 4K scan of And Soon the Darkness on Blu-ray. I haven’t seen this film in a dog’s age, but I remember really liking it when I saw it last (I believe in college!) It stars Pamela Franklin and Michele Dotrice, and was directed by Robert Fuest, who also directed The Abominable Dr. Phibes. This new release features an audio commentary with both the director and screenwriter. This is my “Blind Buy Recommendation” of the month. 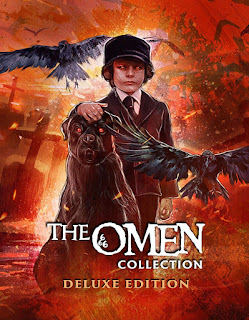 Shout! Factory will release its new Omen Collection box set, featuring all four original films and the 2006 remake. I have always thought the Omen films were great, spooky fun, especially the first and third films in the series. The score of the first film is reason alone to watch it again! Who could have predicted that Damian Thorne (Sam Neill) of the third Omen film would go on to become a respected dinosaur authority? Life is funny sometimes.

Arrow Video will release the “standard version” of its previous “limited edition” of Guillermo del Toro’s Crimson Peak. The new set retains the stunning transfer and extras, but comes housed in a standard keep case, without the special packaging and paper extras of the previous edition. This is one of my favorite gothic horror films of all time. If you did not avail yourself of the previous version, pick this up. It’s a haunted house in a box! 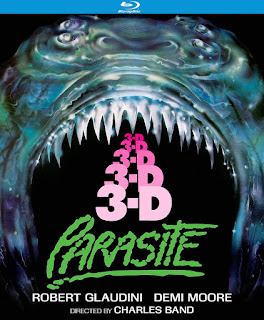 Kino Lorber will release Parasite in Blu-ray 3-D with a transfer supervised by Ron Furmanek and the 3-D Film Archive. This guilty pleasure might not be the greatest horror film ever made, but it’s two tons of fun, especially in its original 3-D. The new disc features a wealth of bonus material, including three new featurettes and an audio commentary with Alan Adler and Daniel Griffith. Good Lord, I last saw this in 1982. When this came out, Demi Moore was still two whole years away from appearing in Blame it On Rio! 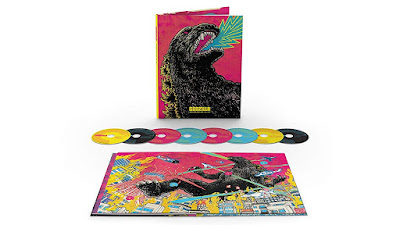 Just in time for Halloween, this date will bring us the motherlode of scary: a Ringu Trilogy box set, the Blu-ray debut of the Lon Chaney biopic Man of A Thousand Faces, and a new special edition of An American Werewolf in London from our friends at Arrow Video; Shout! Factory’s new release of Hammer cult favorite The Devil Rides Out and a new special edition of Chuck Russell’s remake of The Blob; and… drum roll please… what is shaping up to be one of the outstanding releases of the year: the Criterion Collection’s fabled spine number 1000, Godzilla: The Showa-Era Films, 1954–1975. This collection features 15 kaiju classics and a Godzilla-sized collection of bonus features.

This represents four must-have special editions and two box sets. Criswell predicts… it is going to be a very expensive October 29th. Start suggesting that people give you cash instead of candy on Halloween to help offset your end-of-the-month credit card bill. Maybe Amazon can start offering discounts in exchange for blood and platelet donations! Try walking around your neighborhood, surreptitiously collecting outdoor Halloween décor and then try returning it to Spirit Halloween for cash! One economic tip I can offer is that the annual Barnes & Noble Criterion sale will occur in early November, so those who are patient can pick up the Godzilla set at half price. At least that’s something.

So, my friends: hie thee hence to the interwebs and revel in these Unholy Retail Offerings of the Damned! We can all try to imagine that it’s Satan draining our wallets by tempting us with these scary and expensive treats. Perhaps that will make it seem like “…only a movie… only a movie….” when Halloween is over, and we’ve all been evicted from our homes for failing to make our mortgage payments. Look, Mr. Banker, sir-- it was a clear choice between a Criterion Collection Godzilla box set and paying the damn rent, and I HAVE PRIORITIES.

Let’s make some popcorn.
Posted by Patrick Bromley at 5:00 AM