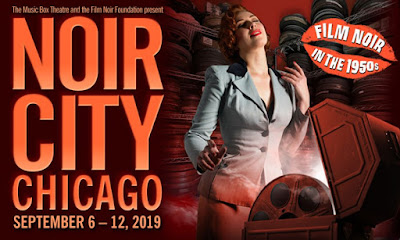 He drew his trench coat around his lean frame and lowered his hat as he stepped out of the shadowy portico and braced against the frigid rain. Deep down, he knew this dame was bad news, but something about her shapely countenance and coy desperation kept pulling him deeper into the sordid underworld she inhabited. He should have known how all of this would end...

Yes, dear readers, this is the part where I confess I am a full-blown maniac for film noir. And to feed this mania, the Music Box Theatre conveniently programs a festival every year just for me (and the hundreds of other film noir fiends who attend). If you have attended a previous Noir City Chicago, you know the dark thrills that await us this year. If you are new to the fest, or to film noir in general, I’m here to get you all wound up for a week of hard boiled hysterics and simmering glimpses of cinema’s dark side.

This time out, the festival focuses exclusively on film noir from the 1950s—arguably the last decade in which noir was a dominant art form by its classic definition. There’s a bit more experimentation, some star turns by names you should recognize, and early entries in the filmographies of future auteurs like Stanley Kubrick. Below is a rundown of my favorites that I’ve already seen, the movies I can’t wait to sink my teeth into, and a few morsels of noir-related knowledge that might persuade you to join me in my favorite week of movies all year. 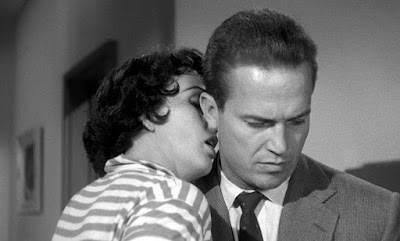 If you woke me up at 3am and asked me to name my top five noir movies, two of the titles I would list without even thinking would be In a Lonely Place and Kiss Me Deadly. I’ve owned these titles on DVD for years, and I can’t even tell you how excited I am to catch them on the big screen—in 35mm no less!

Lonely features Humphrey Bogart’s best performance. Yes, I love Casablanca too—but you can come fight me if you watch Nicholas Ray’s 1950 masterpiece and still prefer romantic Bogey. I’ll take possibly murderous Bogey any day. As a bonus, you get to see one of the all-time great Gloria Grahame performances, which is kind of a miracle in itself because she and Nicholas Ray were on the brink of divorce while this was being filmed. He even made her sign a contract that forbade nagging and gave him complete control of her every action during the hours of 9am-6pm. I’m not one for that “love, honor, and obey” business, but I guess drastic times/drastic measures. She’s wonderful in the movie, so...worth it, I guess?

I hardly know where to begin with Kiss Me Deadly. Maybe I’ll start by telling you that an element of this movie inspired an element of Repo Man. Nope, not telling you what that connection is—you’ve just gotta see this for yourself. Robert Aldrich directs this Mickey Spillane adaptation and does not shy away from mean men and ladies in distress and wacky third act machinations. If you recognize Aldrich’s name, it’s because he also directed The Dirty Dozen and Whatever Happened To Baby Jane (and a good many other pictures). Bonus: Cloris Leachman makes her debut in this picture in a very memorable opening scene.

For my favorite supporting actress performance in the entire festival lineup (that I’ve seen), look no further than Pickup on South Street, directed by the incomparable Samuel Fuller. Thelma Ritter doesn’t have a lot of screen time, but she will knock you all the way out in the few minutes she shows up. She delivers a monologue that gives me chills just thinking about it, and I’d like to have words with the Oscar voters who chose to give Best Supporting Actress to Donna Reed that year. I feel like if you’re reading this website, you’ve heard of and probably seen Orson Welles’ Touch of Evil, in which Charlton Heston plays a Mexican but a lot of other stuff happens that makes me do my best to overlook that glaringly awful casting decision. It’s tense and violent and features a pre-Psycho Janet Leigh performance. Marlene Dietrich and Zsa Zsa Gabor make appearances. If you haven’t seen it, you must. If you have, you also must. Those are the rules.

I’m also excited about revisiting Stanley Kubrick’s The Killing, Jacques Tourneur’s Nightfall, and Don Siegel’s The Lineup – but for now, let’s change gears and talk about the ones I haven’t seen yet. 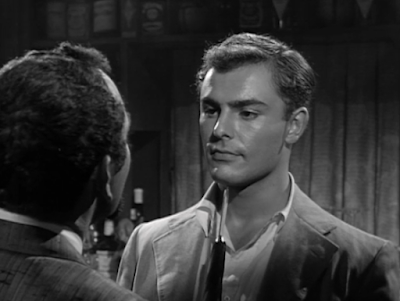 Number one on my most-anticipated list is one that I can’t seem to find on streaming or physical media at the moment: Cry Tough, directed by Paul Stanley in 1959 and starring a very young and studly John Saxon. You’ll have to forgive my lust, I recently watched Enter the Dragon and Black Christmas in the same week and now I’m a little bit obsessed with sexy Saxy. In this movie, he apparently plays a Puerto Rican gang member, which I’m sure is perfectly believable and not at all weird or wrong.

Sudden Fear has been on my watchlist forever, a vital entry into the filmography of our lady of the intense facial expressions, Ms. Joan Crawford. I truly believe the phrase “staring daggers” was invented to describe her. She shares the screen with the aforementioned Gloria Grahame as well as Jack Palance, so you know we’re in for some cinematic showdowns. I’m a huge fan of both Robert Siodmak and Barbara Stanwyck, so naturally I will be on the edge of my seat for The File on Thelma Jordan. Like a good number of film noirs, this one is written by a woman, one Ketti Frings (who would go on to win a Pulitzer later in her career). The movie co-stars former washing machine salesman and future politician Wendell Corey. I liked him in Sorry, Wrong Number and The Big Knife, so I’m curious to see another of his movies.

I mentioned Robert Aldrich above because he made Kiss Me Deadly, so I’m stoked about his other entry in the festival lineup: The Garment Jungle. The title sounds like my closet after a week or so of not doing laundry, but hopefully it’s a little more high stakes than that. Veterans of the genre Lee J. Cobb and Robert Loggia appear in this one, giving me even more hope that it will be a solid noir picture and not just a dress rehearsal (see what I did there).

All but three of the movies showing at Noir City will be playing in 35mm, some are even original prints. As always, the Film Noir Foundation does an awesome job of curating the lineup, and the event will be hosted by Czar of Noir Eddie Muller as well as his comrade Alan Rode. Both of these guys share trivia and the occasional not-so-G-rated anecdote about the movies and their behind the scenes stories throughout the fest, making it even more enjoyable. Plus, many attendees dress up in their period finest, so the people watching is primo stuff.

I recommend bringing an extra pillow to sit on if you, like me, are planning to catch every single movie this week. You may also want to triangulate the nearest places to grab a quick snack between films, bring a book to read before showtimes, and scout out alternative restrooms in case the lines get too long at the theater itself.

For the full schedule and to purchase tickets, go to https://musicboxtheatre.com/events/noir-city-chicago-2019. I hope to see you there! If you don’t live close enough to attend, follow along online and catch up with the movies that are available to watch via streaming (a lot are rentable via Amazon).
Posted by Patrick Bromley at 12:00 PM