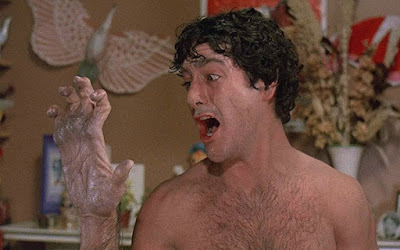 When it comes to horror films, my advanced age (achieved through balanced diet, fresh air, and an ancient demonic curse) gives me a slight advantage. For many of the 1980s-era (era) classics, my first watch was not on a VHS rental at a slumber party full of pre-teens, but in a giant darkened theatre full of other adults. An American Werewolf in London is one such film, and let me tell you—when this film was released in 1981, the audience reaction was NUTS. Zombie Nazis machine-gunning children? A werewolf transformation, complete with nonstop screaming? Wise-cracking corpses, decapitated policemen, and full-frontal nude male balloon stealing? Yes, please!

Remember, this is pre-“Funny Freddy” in the NOES films, pre-Cabin in The Woods, pre-meta anything. AAWIL was really funny and really gory, with amazing practical effects and terrific performances. It wasn’t the first film to do of these things, but coming from John Landis, a mainstream director at the top of his game, it felt like a revelation. I don’t think I’m overreaching to say that AAWIL’s commercial success, along with its crazy and effective mash-up of comedy and horror elements, helped spur the 1980s horror boom. It was a boom boon! This movie was ahead of its time, which is one reason it holds up so well today.

Yet at the center of all the craziness are David and Jack, two American students whose defining characteristic is their ordinariness. Actually, casting David Naughton as David Kessler, the movie’s romantic lead/main murderwolf, was part of Landis’s genius. At the time, Naughton was most famous as the star Pepper in Dr. Pepper’s tremendously popular “Be A Pepper” ad campaign. “Oh Jan,” I can hear you thinking due to the telekinetic powers imparted by my demon curse, “Surely a Dr. Pepper commercial wasn’t really a cultural phenomenon.” Yes, actually, it WAS. Naughton was SO appealing, familiar, and popular as “That Guy From The Dr. Pepper Commercials” that when he landed the lead in a short-lived TV series called Makin’ It they let Naughton sing the theme song, and the song got to #5 on the Billboard charts AFTER THE SHOW WAS CANCELLED.

But I digress. (Spoilers ahead for An American Werewolf in London, so if you haven’t seen it, what are you waiting for? It’s awesome.) 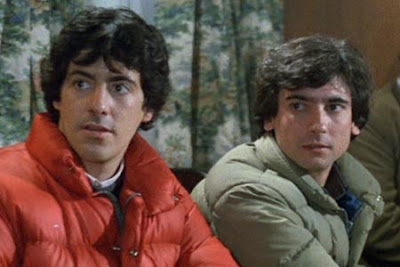 AAWIL gave Naughton his first chance to show his chops (#werewolfhumor) as an actor, but already he was immediately recognizable as A Nice Guy, someone we are absolutely not expecting anything bad to happen to, ever. At the beginning of the film, we meet American students David and Jack as they’re hitching a ride in a truckload of sheep, looking as placid, innocent, and ultimately vulnerable as the baaa-ing floofs around them. Their faces, their clothes, and their easy friendship all seem warm and familiar; these are exactly the guys we’d backpack with across Europe, or hang out with in a pub on a rainy night. Jack is the funny one and David—with his big, brown puppy-dog eyes and easygoing demeanor—is the sweet one, cute but non-threatening, with a gee-whiz quality that makes him seem harmless… until it becomes his tragic flaw.

This is the crux of Naughton’s performance as David, and we need to buy it all. David is both a man and a monster, to echo the question posed by a tabloid headline shown in the film the morning after his first transformation. Yet, unlike many movie monsters, the two facets don’t bleed into each other. Naughton plays both sides as completely separate but still nuanced enough to be interesting. We need to be able to believe that David is a victim without seeing him at merely pitiable; we need to believe he becomes a monster without seeing him as merely evil. David the Man is as sweet and “safe” as David the Wolf is terrifying and dangerous. We root for David the romantic lead because Naughton plays him with warmth and depth—he’s nice but never boring—and the more we love David the guy, the more we fear David the monster. 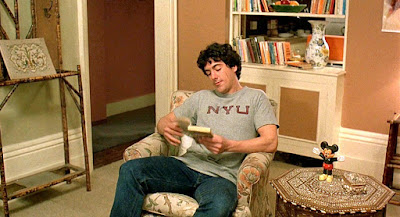 The effect is amped up by the way AAWIL plays its humor genuinely funny and its horror disturbingly bloody. This is neither a horror movie with lame jokes nor a comedy with a little gore; it’s full-on BOTH, undiluted. Landis directs the few scenes that don’t feature David—for instance, the villagers’ foreboding discussion in the pub after they’ve turned the boys away—to feel most like a standard horror film. David’s scenes feel more like a standard Rom-Com; Landis resists the urge to punctuate them with minor-chord musical stings or darkly mysterious shadows. Only in David’s increasingly disturbing series of nightmares do his two sides “bleed” into each other. Naughton nails it, whether tearing hungrily into a bloody deer’s head or watching in horror as his family burns.

JB calls Griffin Dunne’s Jack Goodman character “the moral center of the movie” and I don’t disagree. He’s David’s Jiminy Cricket, that voice of conscience that’s too easy to ignore because David is the only one who hears it. This is what I mean by calling David’s ordinariness his “tragic flaw.” We believe that David is a good person, with good intentions, but we know he’s going to kill a bunch of people, because 1. This is a werewolf movie, and werewolves gonna werewolf; and 2. Jack tells him, “You’re going to kill a bunch of people unless you kill yourself.” Of course, Jack has the benefit of hindsight—as the ghost of a guy killed by a werewolf, it’s easy for him to believe that werewolves are real. The problem is, David is so ordinary, so nice and kind and normal that he refuses to believe in ghosts, or werewolves, or socially mandated suicide… until it’s too late.

Naughton gives an arresting performance during the famous wolf transformation scene (helped in no small part by Rick Baker’s stunning physical effects). But he’s equally effective at showing us David’s emotional transformation—from a warm, funny, positive guy-falling-in-love into a man who must accept his fate in a reality that’s far darker than he realized. Only as the wolf, cornered and snarling, can he finally make the awful, but “right” choice—or does he? I like the ending’s ambiguity: do Alex’s loving words reach the human inside the monster, causing David to commit “suicide-by-cop” as the ultimate act of love for her? Or is there only the monster, leaping for the kill before being struck down? I like to believe it’s the former. Either way, that’s our nice-guy David at the end, curled softly into a motherless pieta, sweet and harmless again. An American Werewolf in London as a film has so much going for it—its script, direction, and special effects, to name only three—but its warm, gooey center is David Naughton’s performance.