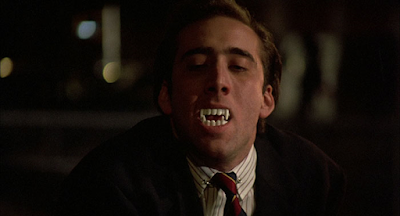 Adam Levine isn’t the only one who’s got the moves like Jagger.

Picture this: A young man clad in boxers breaks into a woman’s apartment, hauls her into the corridor, and bites her neck. Neighbors call the police, who give chase through the parking lot and over fences while the man hisses and snarls, and keeps shouting that he’s a 500-year-old vampire who has to feed on human blood to live. When the cops catch up to him, he’s put in restraints but sticks to his story while gnashing his teeth and threatening anyone in sight. Psychologists who are interviewed by local news cameras blame pop culture for these vampiric hallucinations  —this was 2011 and Twilight was all the rage. But the Marquis de Sade might have had a different take, considering this passage from The Crimes of Love: “Those who are unhappy clutch at shadows, and to give themselves an enjoyment that truth refuses them, they artfully bring into being all sorts of illusions.”

I guess it’s easier to blame the movies than to ponder the possibility that the human mind is capable of manifesting all kinds of horrors with just the right bit of provocation or chemical imbalance. Look no further than the recent hand-wringing that preceded the release of Joker to see other examples of our tendency to make movies a scapegoat for violence and untreated mental illness. If you thought Joaquin Phoenix gave a jaw-dropping performance as the unstable outcast whose delusions blend with reality to violent ends, you really owe it to yourself to (re)watch Vampire’s Kiss. Nicolas Cage delivers one of the all-time great horror performances, embodying both the artful enjoyment and the clutching at shadows referenced in the de Sade quote above. 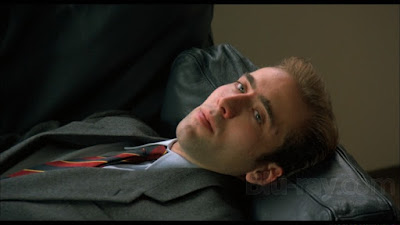 When director Robert Bierman first approached Cage about doing this movie, Cage was fresh off a turn in the Oscar-winning romantic comedy Moonstruck. He’d also been the romantic lead in Valley Girl and Peggy Sue Got Married. These movies positioned him as an offbeat but likable guy, handsome if a bit eccentric. And now, he was entertaining an indie vampire movie where he would descend into madness and treat women horribly and eat some very unpleasant things on camera (more on that shortly). Cage was interested, but his agent talked him out of it. But he couldn’t stop thinking about the opportunity to do something completely different, more “punk rock,” in his words. When Judd Nelson left the picture due to a scheduling conflict, Cage called Bierman back and agreed to star in the movie for $40,000.

In case you have not seen the majestic dark horror comedy that is Vampire’s Kiss, I will attempt to summarize, but really it must be seen to be believed. I would do a spoiler warning but Cage’s performance is unspoilable. So watch it, but if you read this first, you will still get almost the full effect because he’s just incredible.

The movie opens as the sun rises over New York City; a young, suave Peter Loew (Cage) is chuckling from his therapist’s couch as he discusses a recent romantic conquest. He’s well-dressed, with slicked back hair and a smirking face. He could be charming in a certain light, but douche-y seems to be the default. In the next scene, he’s chatting up a woman (Kasi Lemmons, before she became a director) in a club and convinces her to come back to his place. The two of them leave the club laughing, and the clothes come off almost as soon as they enter the apartment. Everything is going well until a bat flies into the room. She screams, he tells her to “just relax,” and he shoos the winged visitor out the window.

The next day, we encounter Peter at his literary office and he’s a different guy. Uptight, pretentious, the kind of guy who communicates with his secretary Alva (Maria Conchita Alonso) using whistles and hand gestures most people reserve for their disobedient pets. This guy is an HR nightmare—and I should know, I’m in HR. When she doesn’t snap into compliance to his every whim on the completely unreasonable timeline he demands, he makes her life a living hell—including a trip to her house when she calls in sick and a trip to the basement when his dark side completely takes over.

Women seem to baffle and fascinate Peter. He meets another woman, Rachel (Jennifer Beale), at another club; next thing you know, they’re back at his place but this time she’s taking charge. She strips, pins him down on the bed, and sinks her teeth into his neck. He struggles at first and then surrenders in bewildered ecstasy. As Bram Stoker would say, “No man knows til he experiences it, what it feels like to have his life-blood drawn away into the woman he loves.” 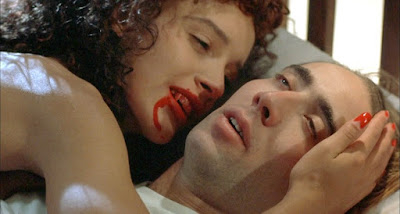 The next day, he wakes up whistling, slips into his robe, and rustles up breakfast. He brings two plates and two cups of coffee back to bed, when the camera pans back to reveal Peter is talking to… no one. He holds out a coffee mug to his invisible guest, apparently unaware she has departed — if she was ever there at all.

The rest of the movie follows Peter’s transformation. He believes he’s been turned into a vampire and begins behaving accordingly; what we see, however, seems to indicate a man unhinged from reality. His troubled interactions and attitudes toward women escalate into criminal realms; his paranoia and rage drive him to trash his own apartment and sleep under his overturned couch. He laughs too loud and too long at work meetings; he bursts into the women’s restroom to deliver a diatribe; he purchases plastic fangs and wears them around town. His eyes seem to get bigger in every scene, his shoulders go up and his neck extends til he looks more beast than man, and he begins feeding on living things, from cockroaches to pigeons to, eventually, human flesh.

He seeks help from his therapist, but in his deranged state he’s actually just talking to a brick wall, hair disheveled and face bloodied. Of course, as Robert Louis Stevenson once wrote, “Everyone, at some time or another, sits down to a banquet of consequences.” For Peter, the natural consequence to end his miserable and manic existence is a wooden stake that he fashioned himself. He has a little help finishing the job, and the movie closes much as it opened, with the sun rising and Peter in repose— this time not on the couch, but on the floor next to it. 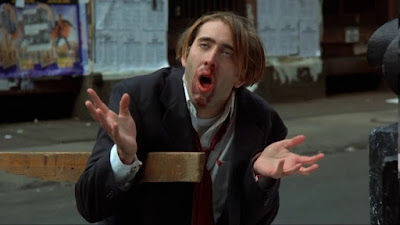 Other actors have done the whole “descent into madness” thing — Christian Bale in American Psycho comes to mind — but Cage sells it in a way I have never seen anyone else manage to do before or since. The way he so seamlessly transitions from a guy who could have been the '80s Ryan Gosling to a sadistic boss to a psychologically disturbed menace that you would cross the street to avoid… it’s incredible. On the audio commentary of the DVD, which I cannot recommend highly enough, Cage explained that he grew up watching silent films — lots of German expressionist stuff, like Cabinet of Dr. Caligari and Nosferatu. He said that in this film, he had this vision to bring silent film kind of acting to a modern movie. This really comes through in the physicality and facial expressions he uses to communicate the changes in mental state that his character goes through. There’s actually a clip from Nosferatu in this movie, and it’s impossible not to see the parallels. Bierman combines these unusual overhead shots with close-ups and two-shots, so we get to see the full range of Cage’s body and face. Another thing that stands out in this performance is Cage’s unusual accent, which seems to go in and out depending on who he’s talking to. Turns out this was an intentional choice. Cage explains that he got the voice and accent from his father. “He was a professor of comparative literature and at some point he made the decision to speak with distinction. To me it always sounded absurd, although now I understand. It was a very continental sound, which I thought a literary agent would adopt to sound impressive to people.” He dropped the accent in scenes with his therapist, since he would have less need to impress her, but in the office and when he’s trying to pick up women, the odd accent seems more pronounced.

He was going for larger than life in certain respects, but in others he wanted realism. For the bat scene, he felt that a real bat would make it more exciting so he sent his assistant out in the middle of the night to find a bat in Central Park. Thankfully, this mission failed; the director managed to convince him that a bite from a rabid bat could be deadly and he relented. But another opportunity to get real and raw came with the scene where he goes crazy in his apartment. First he trashes the place—which involved smashing real plate glass tables, mirrors, and other furniture — no trickery or stunt doubles. Then, he eats a live cockroach. This was not in the original script, but Cage said he came up with the idea after hearing about the stir Ozzy Osbourne caused when he bit the head off a dove. “I just viewed it as a business decision—people go wild in the theater when that scene comes up,” says Cage.

Despite being deep into his unique blend of method acting and silent expressionism, Cage still managed to highlight the comedic moments in the movie. One of the most memorable comes when he’s complaining about his secretary’s inability to locate a file and he ends up reciting the entire alphabet to his therapist. He explains on the commentary that he choreographed that scene, which included some poses he lifted from Mick Jagger, while in his hotel room with his cat Lewis. In another scene, he channeled his high school acting teacher who didn’t hold him in very high regard. This teacher’s animated gestures and vocal cadence produced the meme-able “Am I getting through to you, Alva?” moment in the film.

As mentioned before, Peter says and does some truly despicable things to women. Cage emphasized that while it was tough to portray those things, he leaned into the offensive side of his character so as not to glamorize or trivialize the behavior. At the same time, he wanted there to be moments where the audience has empathy for this guy who gets more desperate as the movie goes on. The challenge, Cage said, was to make “this ridiculous, sadistic man somehow be sympathetic.” And somehow, he does. Even though we’ve seen him eat a cockroach and degrade his secretary and run bloody through the streets yelling, “I’m a vampire” over and over, we still somehow care about him. That thread of melancholy encircles us, and tugging at the back of our minds as we wonder what it would take to push us over the edge into insanity.

“I think I cared more about this performance than any other performance in my career,” Cage told an interviewer in 2013. I couldn’t agree more.
Posted by Patrick Bromley at 5:00 AM