Ladies Behind the Lens: RIOT GIRLS 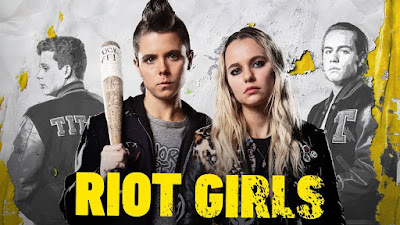 Not another teen movie.

If I told you that Ang Lee’s Hulk influenced the style of this movie, would that make you more or less interested in seeing it? OK, how about if I throw Rachel Talalay’s Tank Girl into the mix of influences? Now what if I told you it’s set in Potter’s Bluff, the same fictional town as Gary Sherman’s Dead and Buried? And that all the adults are dead of a wasting disease when the movie opens, and that one side of town is run by teenage tyrants in varsity jackets while the other side of town is populated by punks scavenging for supplies? Oh and by the way, the soundtrack consists of tunes by L7, Girlschool, Regan Youth, 45 Grave, Joan Jett, and other female-fronted rock bands. A cute Boston Terrier puppy also makes an appearance in the midst of all this apocalyptic insanity. Yeah, you know you want to hear more.

Jovanka Vuckovic, who contributed her short film "The Box" to 2017’s XX horror anthology, makes a splashy feature debut with the stylish and raucous Riot Girls, now playing on VOD and Amazon. For this project, she partnered with writer Katherine Collins to tell a lively story that doesn’t shy away from violence and splattery practical effects as it explores themes about gender, class, and conformity.

As the movie opens, the camera follows a mohawked girl armed with a baseball bat riding on a skateboard as she careens through a main street in graffitied ruins. A comic-book style caption introduces her as Scratch (Paloma Kiatkowski), and we immediately get the feeling that she’s not taking shit from anyone. Next on the scene is Nat (Madison Iseman), whose leather studded jacket sports patches for L7 and Fugazi on the front and the words “Eat the Rich” on the back. She and Scratch get lucky as they raid the bedroom of two adult corpses: They discover a handgun and a vibrator, the latter of which contains much-needed batteries that are practically currency in this wasteland. They bring these supplies back to the East Side Hideout, which is decorated with an assortment of furniture and spray-painted manifestos.

Meanwhile, Nat’s brother Jack (Alexandre Bourgeois) has a run-in with some Titans--West Siders who wear letter jackets and live for the opportunity to intimidate and beat up kids from the wrong side of town. The Titans are led by Jeremy (Munro Chambers), the oldest surviving kid in Potter’s Bluff, a super smarmy dude who claps at his own speeches and rules with a sadistic authoritarian fist. His next in command is introduced by the onscreen caption as Todd (Darren Eisnor), a “total dick; definitely would sweep the leg.” Todd has a mullet and an extensive knowledge of karate, but zero empathy for anyone. We get the feeling Todd and Jeremy were jerks before the apocalypse began and now they’re really coming into their nihilistic kingdom with no one to stop their reign of terror. These guys have found a way to weaponize school spirit, and their pep rallies (complete with Jock Jams-style music) incite violence and often have a body count. 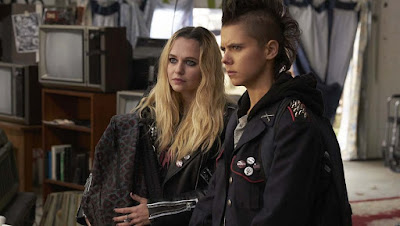 When Jack gets kidnapped by the Titans, Nat and Scratch decide to cross enemy lines to rescue him. There’s something gratifying about the inversion of the damsel in distress trope -- this time it’s a dude in distress, and his rescuers are a couple of lesbians in leather jackets. Oh yeah, I forgot to tell you, there’s also a lesbian love story embedded in this bloody battle royale.

Everything about this movie is catnip for me: the music, the badass women, the comic-book panel editing, the no-holds-barred gore, the Lord of the Flies-meets-Stanford Prison Experiment societal critique. It’s an independent movie but its production values and visual panache aren’t cheap looking stand-ins--this movie looks gorgeous. It takes place in autumn, and every shot is saturated with gold, crimson, and green--warm colors that contrast with the cold harsh world these kids inhabit.

For Vuckovic, representation of women in genre films -- especially horror -- has always been a passion. She grew up loving these cult movies but there weren’t many that depicted people like herself, a queer girl. So when she got this script from Collins, she was immediately drawn to that aspect of the story. She has talked in interviews about how that representation was important both in who she cast and also who worked on the film. She and producer Lauren Grant envisioned an inclusive set, which meant seeking out a racially diverse cast and hiring a crew of women wherever possible. 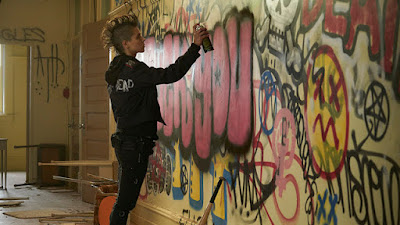 Says Vuckovic, “Instead of just hiring a bunch of men who have all of the experience and all of the opportunities, we had to take chances in hiring lesser experienced women in some roles. If I didn't do that, I wouldn't sleep at night. I wouldn't have met all these amazingly capable women, and absolutely zero change would happen."

This movie flies by; it’s only 81 minutes long and feels like about 15. It brought me back to my days of hosting an all-women rock show with my friend Shannon on my college radio station, playing bands like L7 and Bikini Kill and Bratmobile and Sleater-Kinney and Blondie and The Slits. It also made me want to program this movie for every junior high and high school in the country, because kids if you thought The Hunger Games was cool, wait til you get a load of this. It’s not a perfect film -- a few plot strands lack a payoff -- but perfection doesn’t matter. The spirit of rebellion is infectious, and I’m happy to say I’m completely caught up in it.

Watch Riot Girls via Vudu or Amazon rental and prepare to pump your fist in joyful defiance.
Posted by Patrick Bromley at 5:00 AM