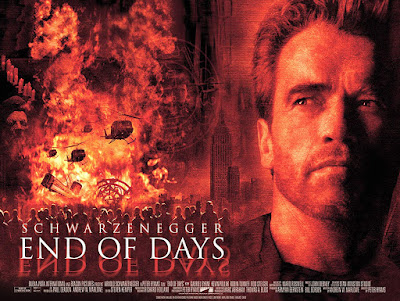 If you felt Terminator needed The Vatican, then I have a movie for you.

I’m always going to have a certain level of affection for End of Days because I saw it opening weekend at a relatively new megaplex where the big new releases always felt like an event. I remember standing in a line that snaked around the center of the building and all the way down the hallway. This happened often at this theatre back then, even for a middling action-horror movie like End of Days. I very much wanted the movie to work because it was a comeback vehicle for star Arnold Schwarzenegger, who face-planted as Mr. Freeze in Batman & Robin. After Jingle All the Way, too, Arnold (who I grew up loving as an action icon) was on a cold streak (pun intended). End of Days was a change of pace for him. It stripped Schwarzenegger of his trademark levity and leaned more into religious horror than his usual science fiction or straightforward action. The results were not great. 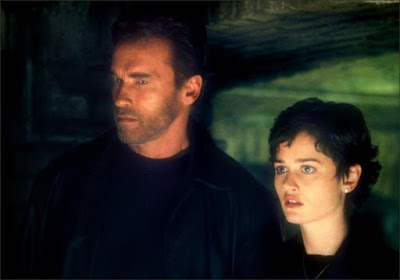 This week was my first time revisiting End of Days since theaters 20 years ago. Even with “everything was great in ‘99” nostalgia goggles, I found the film still mostly a slog. Arnold comes across best. His performance as former cop/current bodyguard Jericho Kane (great movie character name) was an early indicator of a mode he’d return to later in his career as a damaged man thrust into action one more time. Schwarzenegger works in End of Days as a dramatic actor and his arc is the best thing about the movie. He and Gabriel Byrne (here playing Satan) have the film’s only great scene, where Satan is trying to bargain with Jericho Kane to reveal the location of a young woman (played well by Robin Tunney in a poorly written role) that Satan wants to impregnate to give birth to the Antichrist. The scene feels like it comes from The Devil’s Advocate, a better movie. The stakes are immediate and the offer is hard to resist. It’s a compelling sequence in a movie that needs a few more of them.

The remainder of the film is dingy, poorly-lit (no surprise, it’s directed by good director/terrible cinematographer Peter Hyams) and bogged down by religious mumbo jumbo repetitively spat out by Rod Steiger. The rest of the cast (including fellow cops played by CCH Pounder and Kevin Pollak) are too thinly formed to leave much impression. End of Days is a movie that’s stuck in the middle tonally. With the religious angle involving The Vatican, priests, and exorcisms, it could have been The Exorcist level highbrow or pulpy Heavy Action lowbrow like some of Schwarzenegger’s previous output. The movie doesn’t go firmly in either direction, so it just sits there, hoping it moves with enough budget and scale that you don’t notice the film isn’t working. 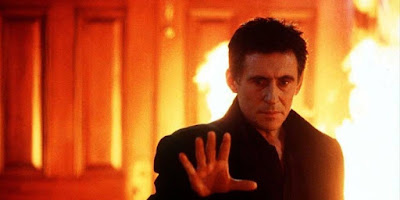 My favorite example of this is an embarrassingly written moment Steiger whips through where he corrects Robin Tunney that “666” isn’t the sign of The Devil in her dreams, but that it’s “999” as in “1999,” which is when the film is set and Satan is to return. The whole thing feels like when you’re giving a presentation and you rush past a bad statistic hoping no one interjects asking for more information. I’m surprised it wasn’t cut out of the movie. It’s that bad. Schwarzenegger wasn’t alone being adrift in the action genre by 1999. This robust category of the ‘80s and most of the ‘90s was fading traditionally and being re-invented by films like The Matrix. Old school action heroes such as Stallone, Van Damme, Seagal, and Schwarzenegger had their best days behind them (Stallone might be the exception, but his comeback wasn’t until 2006’s Rocky Balboa). In that way, End of Days as a movie reflected the time and place of its setting. 1999, moving into the year 2000, was a time of excitement but also anxiety, with the arbitrary timestamp marker signaling evolution and change. End of Days was somehow both passé and different at once. Schwarzenegger was stretching as an actor and with the material he selected (you can tell he wanted his last movie pre-2K to matter), but the problem didn’t seem to be his style of movie had reached its natural end. Sadly, it was the idea of Arnold Schwarzenegger as a premier movie star that was over and done with. I’m not sure a better movie would have prevented that, but it makes you think how much longer Arnold could have been on top if his losing streak ended with End of Days working and he became emboldened and rewarded for shaking up his filmography. Who knows?

Note: It’s hard not to ironically dig the macho leanings of the End of Days soundtrack. It featured new songs by Korn, Everlast, a band inexplicably named Professional Murder Music, Limp Bizkit (during a sex scene), Arnie’s old pals Guns N’ Roses, The Prodigy, Rob Zombie, Eminem, Powerman 5000, Stroke, Sonic Youth and wait for it…Creed! I’m going to listen to this thing right now; and that (I suppose) is the legacy of End of Days. Or how this dude looks like Warwick Davis but isn’t Warwick Davis.
Posted by Patrick Bromley at 5:00 AM