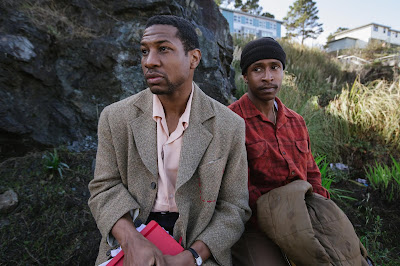 “Let us give each other the courage to see beyond the stories we are born into.”

Sins of omission
I feel the pain of missing out on these movies most sharply: 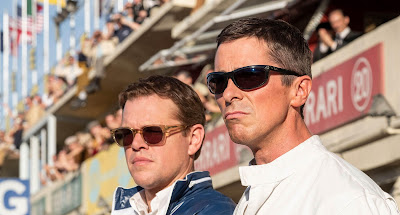 The shorthand for the marketing is that it’s a movie for dads, and as if to prove my point, Obama had put it on his list of favorites of 2019. Also, my dad really enjoyed it too. All inferences about my own aging aside, this is the movie that exemplifies the kind of competency that I wish every Hollywood movie had: charismatic stars, beautiful production value, competent directing/writing/camerawork. Matt Damon and Christian Bale crank up the movie star charm to elevate a simple and perhaps forgotten story about a little race in the farm country of France back in 1966. It’s competitive without being jingoistic, and entertaining while still being grounded in reality. 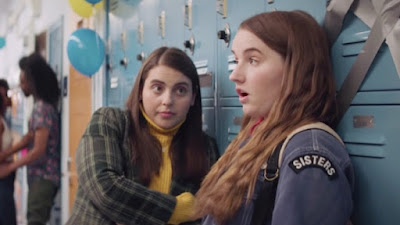 Partly because of my day job, I find it difficult to summon the energy to watch stories centered around teenagers (exhibit A: Eighth Grade from 2018). There are, of course, many good movies in that genre (see exhibit A), but I don’t want to delve into that awkward adolescent emotional space in my movie-watching free time. Olivia Wilde’s directorial debut broke through my inhibitions because it converts all of that awkward energy into humor but is incredibly loving and earnest with its characters at the same time. It’s heightened in its tone, but doesn’t wander far from the realistic tension of the best friends, Molly and Amy, who aren’t sure how to open up a new chapter of their lives together. 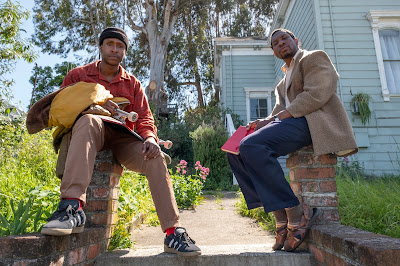 Director Joe Talbot’s first feature is a loose retelling of the childhood of his friend Jimmie Fails, who happens to star in the movie. More importantly, it’s the kind of story you can tell has been rolling around in somebody’s head for a long time. San Francisco is photographed with a native’s eye, with that mixture of loving attention and weary jadedness that long familiarity tends to develop. It’s a relatively small story, but touches on big questions, like what transforms a place into a home? Is it still home if nobody wants you there? How can you love something that doesn’t love you back? It handles these questions, not by fully answering them, but with a grace and lyrical quality that suggests the great affection that the main characters, Jimmie and Montgomery, feel for this place that is sacred to them. 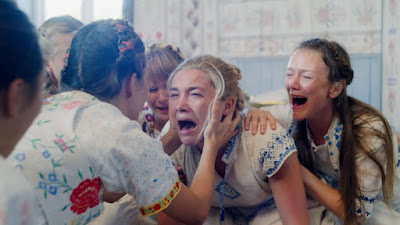 The movie has been out for awhile, but the less said about the story, the better. Ari Aster has made something that I’ve never seen before; the viewing experience was that pins-and-needles sensation of not knowing where the story would go next. This is the sort of unearthly stuff I would expect from perhaps a non-American movie, or from the weird underbelly of another decade, not from a small studio movie in 2019. It’s unsettling and strange, and I cannot stop thinking about it. 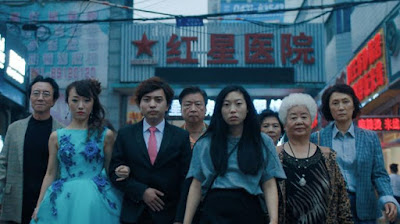 Although getting a lot of interest for it as a stage play, writer/director Lulu Wang really wanted the story to be a movie. So, she went on the talk show circuit (like on NPR) to plug her story (even as far back as 2016), and was able to scrape together enough financing to get it made. Though perhaps small in budget, it is fierce and poignant with a lovely story about a young woman (played by Awkwafina, in a controlled, reserved performance) forced to move forward when all you want to do is move back. Not that awards are the end-all, but I think that this one will get a lot of positive buzz when awards season comes around, which is only good because I want Lulu Wang to keep telling stories. This one begins with a lie. 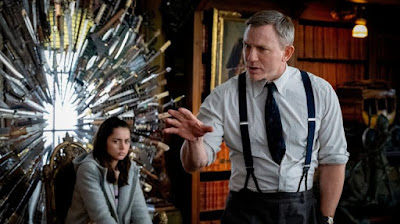 Why aren’t murder mysteries made more often? You can load up on a huge cast, you can set them in any decade, you can place the story in a super cool set, and the genre rules are already out there for you to use or to bend. This one is instantly rewatchable, with its dialogue, its script, and its baked-in ideas of how people put themselves above others as soon as its convenient. Not that anybody needed a reminder, but Rian Johnson is still one of the most talented writer/directors around, and a generous professional artist on top of all of that. 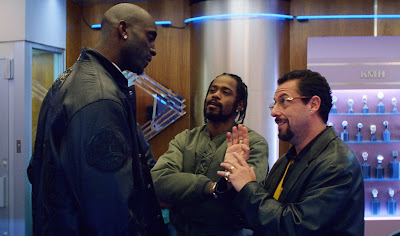 Spiritual cousins with the Safdies’ previous release Good Time, it’s a panic attack disguised as a movie. Like some other movies on this list, it’s a story that’s been brewing inside of someone’s head for a long time, and the love and craft of the story shows up in the performances, the editing, and the sound design in particular. Normally, we don’t totally enjoy watching a character making a series of bad decisions unless he’s having fun (i.e. The Wolf of Wall Street), but the movie’s adherence to its own code elevates it above other movies in the same vein, and is why we stick Howard Ratner (Adam Sandler) as he searches for the elusive big win. At the heart of all of it is Adam Sandler’s complete immersion into the character of Ratner; wherever you land on the movie, you never get taken out of the movie because it’s Sandler on screen.

The “don’t make me choose” level

I put them in this order, but truly, these movies I will take with me from this year far into the future, and can be in any order at the top of my list. 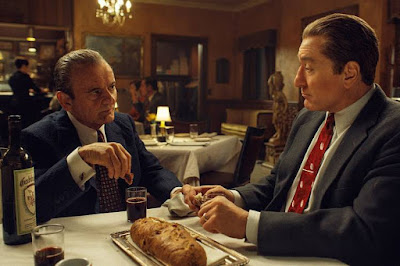 Martin Scorsese’s latest uses the idea of one specific character’s viewpoint to unravel the thread of memory that sprawls across decades, a truly Faulknerian enterprise brought to cinema. The memory context also serves to get away from the traditional 3 act structure of most movies and to keep the narrative engaging over its 3½ hours, which never felt dull or weighed down, in the way that we get lost in our own recollections of the past. The slippery relationship between time and memory gets added weight when we consider that Scorsese, De Niro, Pesci, and Pacino, though not retiring this second, are in the collective twilight of their careers; if there has to be a goodbye, then this feels like a beautiful way to do it, pondering one of the central mysteries of human existence. 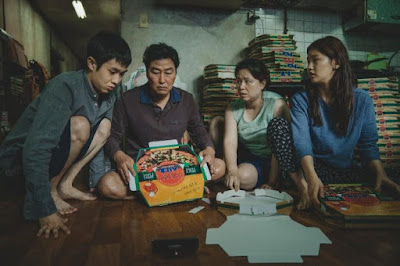 The conversation around the film industry in the United States (if one cares to track it and participate in it) can sometimes carry the fraught anxiety of your uncle who was loath to give up his vinyl (before vinyl came back around but more expensive). “What will happen to the theatrical experience?” the purists cry. “Netflix movies aren’t, like, real movies” they protest. It’s why sometimes it’s great to plug into the movie culture of another country, to be free from the anxieties of ours. Not that South Korea doesn’t have the same issues, but there is a vitality in its filmmaking that feels fresh and new and relatively unencumbered by intellectual property and shared universes. Director Bong Joon-Ho gives us something special, a movie that keeps on twisting away before it can be pinned down, sort of like a parasite clinging to its host for life.

1. Once Upon a Time in Hollywood 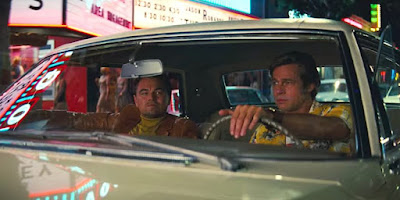 It’s almost impossible to separate the meta-textual with Quentin Tarantino. Partially because no matter how you rank it, Quentin Tarantino is clearly on the list of this country’s greatest living directors. Partially because his movies are the paragons of modern meta-texts. And when the details slowly surface, we wondered about them in a meta-textual way. When the announcement came that the content of his next movie was about the Charles Manson murders, we wondered. When Bruce Lee shows up in the movie, we wondered some more. But, as the factors outside of the movie that could influence our reading faded away, we got to focus on the actual movie itself, and wonder is what we were left with.

We wondered at how meticulous the recreation of a childhood past can be. We wondered at the juxtaposition of the real and the surreal, in resurrecting real people next to fictional ones. And I’ll admit, we probably wondered whether this might be Tarantino’s last movie. As bittersweet as the prospect of Tarantino retiring would be, I take solace in what the movie has to say about letting go; that all things eventually do go away, whether it’s fame or good looks or opportunity, but that only makes them more meaningful, not less.
Posted by Patrick Bromley at 5:00 AM