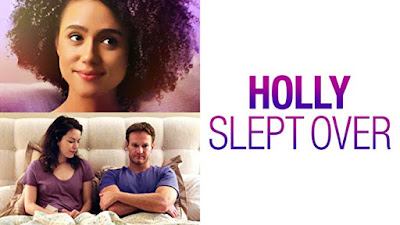 Because DudeBros need sex comedies, too, I guess.

Bro! How’s it hanging? Are you relaxing and chillaxing? This whole Coronavirus thing is crazy, right? Lol! Can’t go out! Can’t run errands! Oh, man! Can’t tackle the Honey-Do list, either though, amirite!? The old lady can’t complain! Uncle Sam’s orders! Haha! #Trump2020! Wait, let me talk seriously for a second. You know what’s a major drag? When your wife won’t bone the way you wanna bone. Right? Like, “Come on, baby. Can’t we do something different this week? Your unconditional love and tacit consent of my adolescent behavior just isn’t always enough, you know?” It’s not our fault! It’s biological. Sometimes a dude just has to, like, be a dude. She can’t get mad at us for being honest. Isn’t she always saying we need to communicate more? This is literally us communicating! And if she doesn’t get that, she’s, like, a total hypocrite. I’m over here making sacrifices every day just to adhere to basic cultural norms! Like, the lowest common denominator isn’t easy just because it’s, like, low, or whatever. You know? 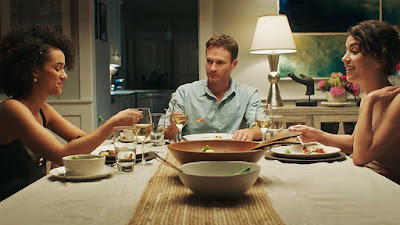 That, right there? Joshua Friedlander’s Holly Slept Over is that shit for eighty-seven minutes straight. An apparent graduate of the Judd Apatow School for Middle-Aged Tomfoolery, Friedlander writes with the kind of vapid juvenility attainable only by those with limitless institutional privilege and absolutely nothing of consequence to say. His freshman directorial effort is a shockingly regressive sex comedy that finds upper-crust suburbanites Noel (Josh Lawson) and Pete (Ron Livingston, because of course it’s Ron Livingston) facing one of life’s true existential catastrophes: Their supermodel wives aren’t the sexual tyrannosauruses they were in their twenties. Pete’s wife Marnie (Erinn Hayes), once down for anal-escapades-a-plenty, just isn’t as turned-on by his paunchy averageness as she used to be, forcing him to commit acts of non-consensual almost-assault on her while she sleeps. Meanwhile, Audra (Britt Lower) has been focusing more on getting pregnant than on pushing Noel’s sexual boundaries, an offense punishable to the full extent of the law. “It’s just very ordinary,” the man-child complains over beers and BBQ while climate change and political apathy eat away at the world around us.

Anyway, as Noel and Pete argue about whether “to have and to hold” should apply to their genitals, Audra drops a stunning revelation: Her college roommate Holly (Game of Thrones’ Nathalie Emmanuel), with whom she engaged in sexual congress on more than one occasion, is coming to visit! This is so crazy! Because Noel is awful, he immediately proposes a threeway with the stunning and carefree Holly. Because Joshua Freidlander saw and sort of remembers Chasing Amy, Audra is horrified by her husband’s willingness to share their bed and insists that her feelings for Holly are complex, personal, and not in any way related to his sexual gratification. But because Holly Slept Over has neither the interest in or the maturity for any other outcome, the trio hit the weed brownies, go skinny dipping, and eventually head to Pound Town. Noel’s chalky lunchmeat aesthetic contrasts comically with Holly and Audra’s supple and tender beauty, which means that the movie is almost porn, but, like, your girl can’t get mad since there’s a story or whatever. 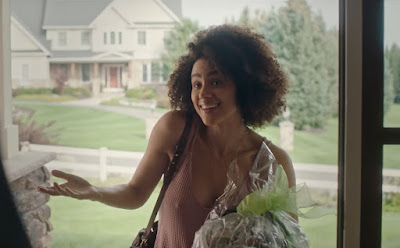 Holly Slept Over is so casually and offensively misguided that I found myself wondering how the actors got through each scene without resorting to violence. Friedlander’s screenplay has all the self-satisfied lyrical sameness of any bad Kevin Smith imitation (every character speaks with an identical wryly-clever voice), but its staggering ignorance manages to undercut any message about emotional maturity or marital compromise it might get close to imparting. For example: After insisting that a threeway will solve their intimacy issues (arguing that one “big” action will allow them to settle comfortably somewhere “in the middle” afterward), Noel berates his wife after the fact when she reveals that her feelings for Holly went beyond just infatuation. “Are you trying to steal my wife!?” Noel yells at Holly, who presumably slobbed his knob thirty minutes earlier. “Do you prefer having sex with her or me?!” he shouts at Audra, who broke a sacred covenant because he wanted some strange. What are we doing, here?

Wait! I forgot the Ron Livingston thing: See, even though Marnie won’t fuck him, she insists on sleeping naked. And she has a KILLER bod (“It would be different if she got fat after having kids,” this shitbag laments), so is it really his fault that he masturbates onto her while she’s asleep? It’s better than him sleeping with someone else, right? Isn’t it? Their marriage counselor — whom they visit after she wakes up mid-assault — insists it is! The movie ends with Marnie laughing it off and joking about taking a shit on him! This is a REAL MOVIE. But I guess none of this really matters. None of you will watch Holly Slept Over, nor should you. What upsets me, though, is that starring in this movie means that the very-qualified Emmanuel, Livingston, Lawson, Hayes, and Lower had to pass on something else. It also means that there must be slack-jawed, McMansioning Silicon Valley assholes out there with whom Holly Slept Over will profoundly resonate. God help them. God help us all. Stay safe out there, everyone.
Posted by Patrick Bromley at 5:00 AM