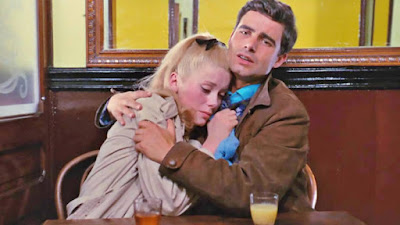 The review duo who are staying indoors and watching movies.

Adam: This week, we’re each discussing three movies we’ve been watching while indoors self-isolating. We’ll keep things light for you here at Reserved Seating. Be safe everybody. We’ll all get through this together.

The first movie I watched was Jacques Demy’s The Umbrellas of Cherbourg starring Catherine Deneuve. I rented this off Amazon last month when I was looking for a romantic movie to watch around Valentine’s Day. I never got around to it, so I finally took the dive with just hours to spare before my Amazon rental expired. It was a very exciting race against the clock, let me tell ya.

All kidding aside, I really liked the movie. It’s a wall-to-wall musical where every line of dialogue is sung. The songs don’t really pop, but the performances, cinematography and direction are all great and I liked how much it reminded me of La La Land, which Damien Chazelle has said was heavily inspired by his favorite movie, The Umbrellas of Cherbourg. The movie’s told in three neatly arranged acts: the couple falling in love, their time apart when he’s sent off to war, and what happens with both after he returns. Really simple but overall very solid. This was my second first-time-watch of a Jacques Demy movie just this year after Model Shop, which I also recommend. 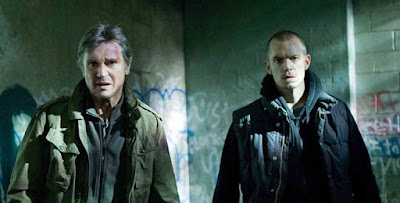 Rob: I still haven’t seen that one. I’ll have to check it out! My first pick is one you generously bought for me while we were picking up #FThisMovieFest supplies: Jaume Collett-Serra’s 2015 Liam Neeson actioner, Run All Night. I’m a little behind on the post-Taken Action Dad Neeson catalogue, but if they’re all as solid as this one, I’ll have to catch up. I don’t always love Collett-Serra’s stylized directing (it starts to feel cheap and DTV-ish, after a while), but he’s a strong storyteller in the ways that count. I appreciated how much Brad Ingelsby’s screenplay balanced characterization and action without getting insincere, especially in a tense phone exchange between Neeson and mob boss Ed Harris. Without spoiling, they’re forced to put their emotions aside in a crucial moment in order to preserve their honor, and both actors play the gravity of the moment with a ton of grace. Action movies tend to rush through platitudes about love, family, brotherhood, friendship, etc., but they rarely take the time to develop them. Run All Night finds its thematic niche (a father seeking redemption by protecting his son) and, well, runs with it. 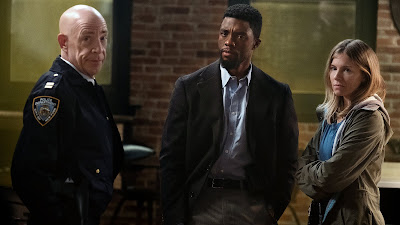 Adam: I’m glad you liked it! The next movie I watched after The Umbrellas of Cherbourg was last Fall’s cop actioner 21 Bridges, starring Chadwick Boseman, Sienna Miller, J.K. Simmons, Taylor Kitsch, and Stephen James. It’s fine. I made a joke on Twitter about it being the most average movie ever made, which is perfect for a home viewing setting. I’m not sure the Boseman performance entirely works. It’s hard to tell if his character is agitated or the actor. He has a bit near the end where he just repeatedly yells “What the f**k?!” at Sienna Miller that I found funny because it doesn’t sound like a line delivery as much as a normal dude who’s had enough of 21 Bridges. The action scenes are pretty good, which makes the movie a reasonable time-waster. 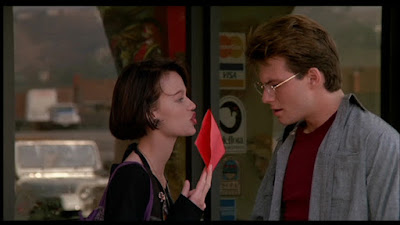 Rob: How is it possible that I saw the 21 Bridges trailer in front of a billion movies over six months and somehow missed it actually coming out? Strange. That’s a Redboxer for me, for sure. My next pick was a contender for #FThisMovieFest that was excised due to its lack of availability: Allan Moyle’s Pump Up the Volume. It’d been years since I’d seen it, but I’m happy to say it holds up. As JB mentions in his 1990 Week column, it’s one of the few movies that accurately captures the American high school experience. One thing we forget (and one thing that more teachers like me need to remember) is that our school days are far more about our psychological and emotional development than they are about academics. We’re literally learning how to be people. We’re feeling things for the first time, things that we’re convinced no one else has ever felt. It’s a lonely and overwhelming time, and we’re programmed to ignore adults who assure us that it’ll get better. As Christian Slater’s Happy Harry Hard-On says (I’m paraphrasing), “Being a teenager is supposed to suck. The point is to survive it.” I agree, and I hope we get a Blu of this one soon! 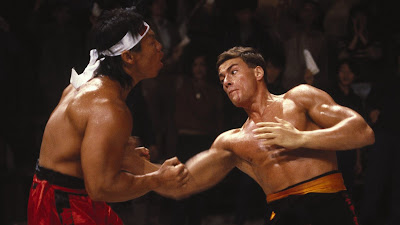 Adam: That’s on my stack of movies to watch, as is the other movie on that double feature disc: the sublime Bed of Roses. After 21 Bridges, I was still scratching my action movie itch and went with a rewatch of Bloodsport. I’m a big fan of martial arts tournament movies and this is one of my favorites. Jean-Claude Van Damme has a lot of zeal in this, his first star vehicle. Everything about the movie works for me. I love how giddy Forest Whitaker looks when he’s trying to eat with chopsticks. I love how Van Damme and Donald Gibb apparently have a lifelong friendship at the end of the movie after only knowing each other for roughly a weekend. I love that Bolo Yeung looks like a demon-possessed Cabbage Patch Kid when he amps up the crowd. I love Kumite and want to go to one. I love my shidoshi, Patrick and Erika Bromley. I watched this once while nursing the wounds of a break-up and it really helped. Bloodsport has healing properties. 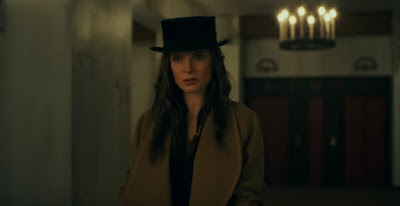 Rob: I’m glad to hear it! I’ll be getting my action on later this week with a few Jackie Chan Blus I just ordered. My last pick is Mike Flanagan’s director’s cut of Doctor Sleep, a movie I caught up with a bit late but have really come to appreciate as both a sequel to and a recontextualization of Stanley Kubrick’s (and Stephen King’s) The Shining. While I really enjoyed the theatrical cut, I’m happy to echo the thoughts of many other movie lovers when I say that the director’s cut is better in almost every conceivable way. It’s about 25 minutes longer, and not every new/alternate scene feels necessary, but most of that added time is in connective tissue — smaller moments that flesh-out character motivations or story beats that feel clunky in the theatrical version. There’s a great bit about Danny’s eye color (I’m trying not to spoil things) that makes his last moment with his mother a bit more profound. There’s also more shape to Dick Halloran’s role, including a few comments that probably make one particular bit of re-casting a little easier to swallow for those who may have had an issue with it. Most significantly (for me), the addition of chapter headings gives Doctor Sleep a necessarily literary feel; this isn’t exactly a tight screenplay, nor should it be. Flanagan’s director’s cut takes its time, letting us sink into its world in a very satisfying way.

Adam: I bought the Blu-ray a while back but haven’t watched the Director’s Cut yet. I was saving it for Scary Movie Month...“and then all this happened.” - Kate Beckinsale, Pearl Harbor. I’ll watch it sometime this month.

Next week we’ll be back with more Reserved Seating -- maybe a box office bomb, maybe a baseball movie, or anything else you all want to read about. Leave a comment if you have any suggestions! We’re here for you. Until next time…

Email ThisBlogThis!Share to TwitterShare to FacebookShare to Pinterest
Labels: 21 bridges, bloodsport, doctor sleep, pump up the volume, reserved seating, run all night, the umbrellas of cherbourg