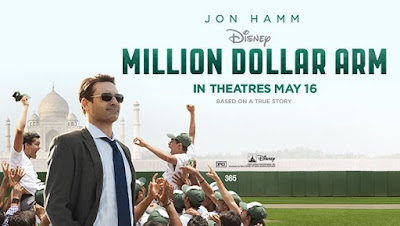 The review duo who land all the big clients.

Rob: Our Spring baseball series continues (despite the current absence of real baseball) with Disney’s Million Dollar Arm, the 2014 feel-good drama starring Jon Hamm as sports agent J.B. Bernstein, whose upstart management firm is one big client away from legitimacy. Knowing they can’t make seven-figure offers to established stars, J.B. and his partner Ash (Aasif Mandvi) turn instead to the untapped talent pool in India, where they believe they can turn cricket bowlers into baseball pitchers. After a national contest that yields two strong candidates (Suraj Sharma as Rinku and Madhur Mittal as Dinesh), J.B. turns to MLB veterans like crotchety scout Ray (Alan Arkin) and college coach Tom (Bill Paxton) to turn his culture-shocked kids into Major League prospects. Along the way, he’ll find himself charmed by the beautiful Dr. Brenda (Lake Bell), who hopes there’s more to J.B. than just business.

This was my first viewing of Million Dollar Arm, and I really enjoyed it. Despite Jon Hamm’s struggle to transition from TV to film (Did anyone other than me see Beirut?), this character is so well within his Mad Men wheelhouse that he seems completely at ease. His J.B. is a softer-edged Don Draper variant, a cunning huckster with a lonely streak trying to make good. Writer Tom McCarthy (Spotlight, The Station Agent) and director Craig Gillespie (Lars and the Real Girl; I, Tonya) keep things moving at a nice clip and really earn their few emotional flourishes without going too saccharine. The big standout is Lake Bell, who casually dips in and out of the film with a Kristen Stewart-esque confidence that conjures some weight and efficacy out of a nothing role. 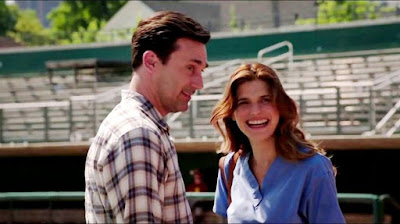 Adam: She’s very charming. The movie is lucky to have her. It cancels out Alan Arkin playing the same character for the 20th time in a row.

Rob: That said, Million Dollar Arm is a baseball movie in the same way that Draft Day is a football movie. It’s more about a central character negotiating the industry than it is about the sport. I’d have done with a little less of the “white savior” seasoning and a little more about the recruits actually training to be pitchers, especially considering the socio-economic implications of their status (and the fact that one of them has an awkward “flamingo” delivery that would be impossible to use in the Majors). Also, unlike Billy Beane in Moneyball, it’s never clear — outside of a scene in which he watches Pride of the Yankees — why or how J.B. connects to the sport. On the whole, though, these are quibbles. There is a thematic core to Million Dollar Arm that stays consistent no matter which character we’re following.

Adam, what did you think of Million Dollar Arm?

Adam: You are definitely the only person who has seen Beirut. And The Last Face. As for Million Dollar Arm, I was pleasantly surprised. I remember when the movie came out that I had no interest in seeing it based on the trailers and Jon Hamm as the lead (I didn’t watch Mad Men). It’s a good thing we have the column to rethink my preconceived notions of a movie like Million Dollar Arm. A couple of things stood out to me. As you said, the film approaches baseball from a marketing angle, which we don’t usually see. Baseball might as well be standing in for how to get a movie like Million Dollar Arm made. What are the marketable elements? Who is the untapped audience that could become a lucrative market? This Disney movie feels like it knows the subtleties of making deals. The second aspect I noticed is what pros Disney are at making sports movies. There’s a comfort to their formula filmmaking. It’s plug-and-play, where you know the beats, it can apply to any sport, you can showcase a certain actor as the lead, and it takes full advantage of the underdog component. The movie is a little cynical about the sport of baseball, but that’s okay. It was refreshing to see a movie that recognizes that in business you don’t have to love the industry in order to be successful at it. 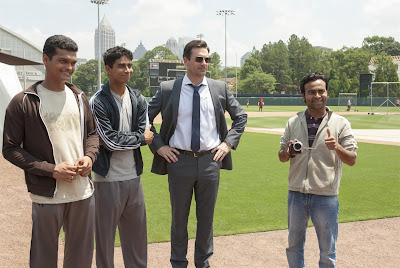 The thought came across my mind that it’s kind of a weird story to make into an inspirational sports movie. The guys aren’t the underdog (or even dreamers) as much as the actual experiment of tapping into a billion customers in India is the underdog. Also, I wanted more scenes dealing with the stunt aspect of the situation. When Sinku and Dinesh are practicing with the USC baseball team, are the college players at the facility resentful of these two guys, who (based solely on skill) don’t warrant this time and attention, getting their own showcase for MLB scouts? The movie never calls it out but there’s nothing about Sinku and Dinesh’s speed and accuracy that would vault them above other players. I kept waiting for one of them to throw 100mph or have an unhittable gimmick pitch, but it never happened.

Rob: I agree, and I’m wondering if that’s why they decided to keep the focus off those individual mechanics/technique issues and more on the “heart” of the story. The real Dinesh and Rinku never went beyond Single-A ball (Apparently Rinku is a WWE wrestler now?), so choosing instead to ride on those predictable and satisfying movie rails you mentioned before seems like the right move. Speaking of which, I want to give a quick bit of recognition to Deepesh Solanki for his performance as Amit, the over-eager Indian baseball fan who signs on to work as J.B.’s valet/translator in hopes that it will lead to a coaching career. The Thirsty Sidekick is a tough part to pull off without decaying into comic relief, and Solanki has a few genuine moments that remind us why he’s there to be J.B 's conscience.

What else stood out to you in Million Dollar Arm?

Adam: The performances by the cast. Only speaking of his film career, I’m not 100% on-board for Jon Hamm yet, but he’s growing on me. He’s perfectly capable in this kind of role. Lake Bell is charming but also seems to know she’s charming if that makes sense. I totally agree with you about Deepesh Solanki. He’s played a bit for comic relief, but he’s the only main character that seems to love baseball so he’s easy to root for. And it’s always nice to see the late, great Bill Paxton show up in a character actor part, even if he’s wasted a bit here. Twenty years ago, he would have been in the Jon Hamm part. 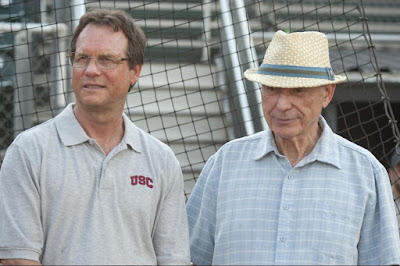 I have a sports movie trope question for you - when you see sports personalities in a movie like this (in this movie’s case, sports media personalities), do you like it or see it as a distraction? I was laughing when I saw Ken Rosenthal show up to the first tryout and flinch back when one of the guys throws a pitch in the 80mph range.

Rob: I’m not totally against it, but it rarely feels necessary. I understand that it’s a quick way to establish verisimilitude (or in the case of something like Uncut Gems, it’s a core element of the entire story), but I would almost always rather be immersed in a fictional world than be reminded of our real one. It also bums me out when I see news anchors in movies because I want to believe that they’re telling me the truth when I see them in their day jobs. Hearing Wolf Blitzer talking about M16 Agent James Bond like he’s a real person just puts me on edge.

So, here’s a thing: We both seem to like Million Dollar Arm, but would it rank among your favorite “baseball” movies? I’m not entirely sure it counts.

Adam: Was Wolf Blitzer in a Bond movie and a Mission:Impossible movie too? Is his filmography stacked and we just don’t know it? (Checks) No it’s not, unless you’re a big Money Monster stan.

Million Dollar Arm would probably be in the top half of baseball movies for me. This was a nice surprise even if it’s slightly more baseball adjacent. It makes me want to cover Sugar soon. It’s about a pitcher that’s signed out of the Dominican Republic and his time assimilating to small town America while pitching in the minor leagues. It’s interesting. Sometimes I forget about how much culture shock players from overseas must be feeling when they get into the infrastructure of the MLB and MILB. Disney seems to think elevators are the biggest issue in that transition. Up next is another Pixar review. What do you feel like watching?

Rob: Let’s continue Pixar in chronological order with 1998’s A Bug’s Life. Until next time…