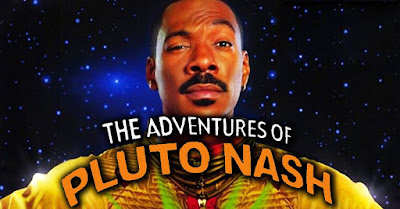 The review duo who watched a movie no one saw about a club owner on the moon.

Rob: Our new series on notorious box office bombs continues with 2002’s The Adventures of Pluto Nash. Directed by Ron Underwood (Tremors, City Slickers), the futuristic adventure film grossed just over seven million dollars against a 120-million-dollar budget, placing it among the most expensive failures in American cinema. Eddie Murphy is the titular Nash, a moon colony nightclub owner who gets in over his head when lunar gangsters (including Joe Pantoliano) try to push him out of the neighborhood — by force! With the help of sassy singer Dina (Rosario Dawson) and trusty android Bruno (Randy Quaid), Nash will fight his way to the final confrontation with mysterious head honcho Rex Crater (also Murphy) and reclaim his club for...himself, I guess? Pluto Nash’s disturbingly overqualified cast also includes James Rebhorn, Jay Mohr, Peter Boyle, Illeana Douglas, John Cleese, Burt Young, Luis Guzmán, Alec Baldwin, and — no joke — Pam Grier.

The Adventures of Pluto Nash has a long and storied Troubled Production history that we won’t repeat here, but suffice it to say that it’s a film that could have worked on paper if any of the very talented people involved in its production cared about it at all. It’s not necessarily incoherent — one plot point technically connects to the other — but everything about it feels like a shrug. For all the gloss, there’s no energy. There are no jokes, outside of a few sight gags. Sets and stunts feel recycled. You can see the contractual obligation all over the actors’ faces. Pluto Nash is a creative orphan, a cost/benefit analysis shepherded by studio accountants and edited by an Excel spreadsheet.

Some perspective: For $120 million (adjusted for 2002 inflation), you could make one and a half Jurassic Parks, four Back to the Futures, five Jawses, or 120 Halloweens. Just putting that out there.

Adam, what did you think of The Adventures of Pluto Nash? 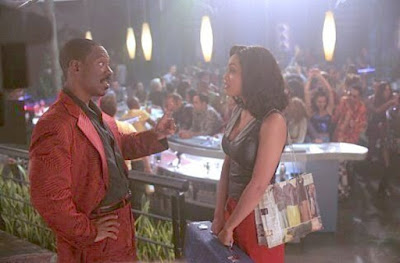 Adam: It’s really tedious. I was hoping The Adventures of Pluto Nash was secretly decent and a victim of being written off by those who haven’t seen it. That’s not the case. This movie earns its reputation of being a career pothole. I stuck with it for the first 40 minutes or so but then I had to finish it in 20-minute chunks over the course of the next three hours. I couldn’t take it all at once. By the time the climax took place, I was coloring in an Al Pacino coloring book you bought for my birthday last year. It was the first time I cracked that open. It took a global pandemic and The Adventures of Pluto Nash for me to say to myself “This is no longer a joke. This is the most viable entertainment option I have right now.” The biggest crime of The Adventures of Pluto Nash for me is that (as you said) it has no energy. This is one boring movie. It constantly reminded me of something a TV sitcom star would make on summer hiatus from their network show in 1989. It feels like a John Larroquette star vehicle or a failed UPN pilot from the late-90s.

Rob: I hope we’ve made it clear that this is a film that takes place on the MOON. In SPACE. And it’s still super BORING.

Adam: To get into specifics, everything about the movie looks cheap. I’ll never understand how something that costs over $100M can look so artificial. It just goes to show there are bad companies that win bids in Hollywood, I guess. The performances feel off, too. Once Randy Quaid showed up early in the film as the quirky outdated robot of Eddie Murphy, it confirmed for me that this was going to be a really unfunny comedy. Quaid’s performance was cringe-inducing for me. Rosario Dawson is pleasant on screen as always, but she’s not given much to do and when she does it’s not great like performing a terrible song at a club gig to close out the movie. Is Jay Mohr’s fake Frank Sinatra on the moon character the best one in the film? I liked that he cloned his Italian wife (with huge hair) so he was married to two of them. It might be the quarantine talking, but it was an appealing lifestyle choice and the only interesting idea in the film for me. As for Eddie Murphy, The Adventures of Pluto Nash is his worst type of performance, where he’s not going for it in any way but instead choosing to be genial and drive the plot. A movie like this needs a star to overwhelm it and Murphy decided to go through the motions. It reflects poorly on the rest of the movie because he (a person in nearly every scene) is not providing much spark to the other actors. It’s a frustrating performance because if Eddie Murphy doesn’t care, then why should the audience? I feel bad for director Ron Underwood, who can make terrific movies (Tremors, City Slickers) but here found one that is dead on arrival.

Why do you think Eddie Murphy goes into this mode every so often where it seems like he’s trying to not be funny? He’s done this in Beverly Hills Cop III, Vampire in Brooklyn, kind of in Metro (a movie I like) and The Adventures of Pluto Nash. Did he really want to be an action star/dramatic actor and not have us think of him as just a comedic actor? I like Eddie Murphy, but it’s frustrating sometimes to see him acting against one of his movies where comedy is appropriate. He’s one of the funniest performers in film history, so to see him be almost tired of it is depressing. Anyone else can drive a plot. Not everyone can be funny like Eddie Murphy. Of course, I get it if it’s something like Dreamgirls, where drama is the point. 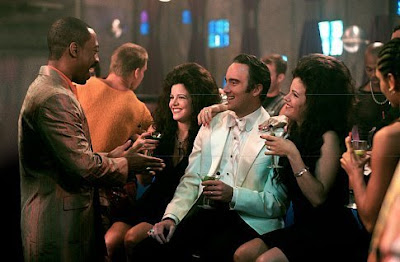 Rob: I want to give him the benefit of the doubt and, with respect to his talent and raw star power, say, “Hey, sometimes projects don’t work out. Sometimes creative people go into something with the best intentions, really try to make something special, and the wires just somehow get crossed.” I want to be able to say he was “stretching his boundaries” or, as you alluded to, attempting to redefine his image. But there is nothing experimental or ambitious about The Adventures of Pluto Nash. Murphy isn’t standing out. His performance isn’t clashing with the film’s overall tone. He’s not making choices or taking chances. He’s sleepwalking. He’s standing there mugging and expecting his presence to be enough. At this point, maybe he just felt entitled to phone one in? Production lore reads that Murphy got bored of Pluto Nash and simply walked away, at one point, forcing Underwood and his editors to cut a ninety-minute film out of their assembled footage without regard to any coherent vision. That might be apocryphal; I have no idea. But it certainly wouldn’t be surprising.

How about this: Is there a version of Pluto Nash that works? Maybe a recasting or an alternate plot element? Should the film just have been about Rosario Dawson?

Adam: I think there is a version of the movie that could work, but it’s not a comedy and would need to be completely re-cast. You could double down on the Han Solo-Casablanca influences and make it grimier like Blade Runner, or you could go goofy-serious and cast someone like Vin Diesel in the Eddie Murphy part. If Vin were Pluto Nash (a name that would have to be changed to something like Paul Nash), he would sell a story about a man who simply wants to run a club on the moon but “the man” won’t let him. Casting Vin gives Pluto Nash an immediate gravitas and code.

As for Rosario Dawson, yeah why not? Give her a shot to headline a movie like this. She’s certainly talented enough to do so. It would make The Adventures of Pluto Nash more interesting for sure. You wouldn’t know what the movie will be until you’ve watched it. When you cast Eddie Murphy, you kind of already know and the lack of deviation from your worst case scenario expectations is largely the problem.

Let’s end on a positive note: What are some of your favorite Eddie Murphy movies and/or performances? 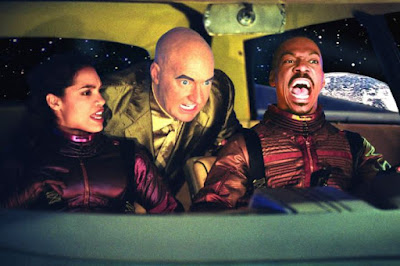 Rob: Mine are probably pretty obvious: Beverly Hills Cop, 48 Hrs, Coming to America, etc. But am I remembering correctly that Bowfinger is really good? For some reason I really like the combination of Murphy’s acting and Frank Oz’s directing sensibilities. Murphy is one of those bigger-than-life personalities who really benefits from trusting/being reigned-in by certain directors (which might help explain why Pluto Nash doesn’t work), and I seem to remember thinking Bowfinger was a good performance.

Adam: I like Bowfinger and I echo your fandom of Beverly Hills Cop, 48 Hrs. and Coming to America. I need to see Trading Places. I haven’t watched it since I was a kid and even then it was probably edited for television. A few I think are underrated are Metro, which is a solid action drama (even if you’re sitting there the entire time waiting for Axel Foley and it never appears), Life, which is a good drama (even if you’re sitting there the entire time waiting for it to be an Eddie Murphy-Martin Lawrence comedy bonanza that doesn’t happen), and Boomerang, which is a great time capsule of early-90s neo soul music and showed off that Eddie Murphy could play an appealing “normal guy” romantic lead (his character in Coming to America was more broadly played to suit the material). I’m looking forward to Coming to America 2 when it (hopefully) comes out around Christmas. I hope Murphy and director Craig Brewer continue to be a good match after Dolemite Is My Name, which I enjoyed.

Rob: Dolemite Is My Name is another good example of two creative forces really finding and bringing out the best in each other. What are we covering next week?

Adam: A baseball review of a movie that has been in my Netflix queue inexplicably for years: The Battered Bastards of Baseball, which has the involvement of Kurt Russell and his family. I’m pretty excited about it and glad we didn’t pick 50 Summers, which was another option. I watched it. It’s for die-hard Kansas City Royals fans only. And Rob Riggle narrates. As a White Sox fan and a fan of things that I enjoy, the movie had nothing to offer me.

Rob: I’m excited! Until next time…