Teenagers from Outer Space is a charming but risible artifact from a more innocent age.

Produced on a shoe-string budget of reportedly under $15,000, it was picked up by Warner Brothers and enjoyed a brief run in theaters and drive-ins in 1959, playing the bottom half of a double bill with Gigantis, the Fire Monster. It then faded into obscurity. 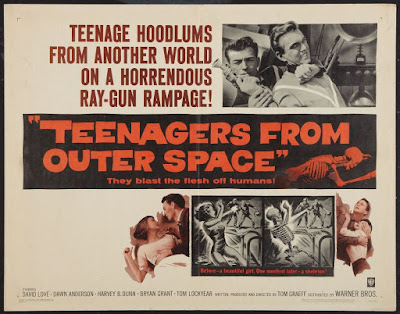 That is, until a one-two-three punch—the home video boom, its inclusion in bad movie clip fest It Came from Hollywood, and being featured in a memorable episode of Mystery Science Theater 3000—resurrected the film like a dashboard Jesus on a California hotrod.

The Plot in Brief: A gang of grumpy alien teenagers land on Earth and quickly reduce a dog to nothing but a skeleton with their scary ray guns. The aliens are searching for a suitable home for the “Gargons,” monsters from their home planet that are too dangerous to live there. The aliens treat Earth and Earth life forms with contempt. They are not shy about turning humans into skeletons too!

Derek (David Love) is the lone sensitive alien teenager. He wishes no harm to Earthlings, keeps his skeletonizing ray gun holstered, and even begins to date an Earth girl: comely pixie-with-a-Toni-home-perm Betty Morgan (Dawn Anderson). Derek wishes that life on his home planet could be a lot more like Earth. He even develops a sentimental affection for Betty’s lovable Grampa Joe (Harvey Dunn) and never even thinks of turning him into a skeleton. Eventually, the time comes for Derek to stay on Earth and turn humans into skeletons… or fly back to his home planet. What will Derek choose? Hey, has anyone seen the Gargon recently? So much of this film revolves around ray guns, I am not surprised that its original title was The Ray Gun Terror. In fact, this film is so amateurish that one of the few pleasures it offers its audience is an abundance of cheap special effects shots showing humans turned into skeletons. These special effects are not impressive: clearly the camera was simply paused while the actor was replaced by a skeleton. We have no scene where a whole group of humans are skeletonized, and it soon becomes obvious that filmmakers used a single skeleton over and over. I personally own more than one fake skeleton, and I assure you that I am not a wealthy man.

As poor an excuse for entertainment as Teenagers from Outer Space might seem, I am a sucker for this type of thing. I could easily watch hours of teenaged aliens using cool 1950s ray guns to turn various humans into the same skeleton. It reminded me of my favorite joke in Tim Burton’s Mars Attacks: the aliens honking out “We will not harm you,” then laughing as they blast the trusting humans with their ray guns. (I never tire of this.) These skeletonizing shots are manifestly more entertaining than anything else in the movie, including performances, costumes, script, camera work or score. Here’s a quick test to see if Teenagers from Outer Space is up your alley. Do the following context-free dialogue excerpts sound “good” to you?


JOURNALIST
I just came from Alice’s. There was a skeleton in the pool.

THOR
(angry and recently shot)
You will take me to a man of surgery to remove the metal pellets from my flesh!

HILDA
(discovering a skeleton in her office)
I'm not going to keep a job where this sort of thing goes on.

DEREK
You make me angry. I like you very much. 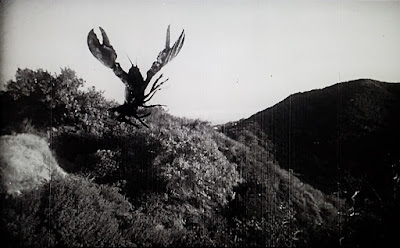 Another tidbit of entertainment? This is one of hundreds of films/television shows that used Bronson Canyon in Los Angeles’s Griffith Park as a filming location. In fact, except for a few streets around Sunset Boulevard and Highland Avenue, most of Teenagers from Outer Space was shot around the Canyon. Any fan of movies and television will instantly recognize this famous location. It was the entrance to the Batcave in the 1960s Batman television show. It was the lair of Ro-Man in Phil Tucker’s Robot Monster. It was also used in White Zombie; Flash Gordon; the original Invasion of the Body Snatchers; The Searchers; Army of Darkness; Hail, Caesar; Under the Silver Lake and more than a hundred more. Here, see for yourselves. This is a short YouTube video where our two tour guides take us to Bronson Canyon (aka Bronson Cave):

Here is a tiny song my wife wrote. Sing it to the tune of Jimmy Buffet’s “Cheeseburger in Paradise.” If it makes you happy, watch the movie.

Teenagers from outer space!
Skeletons lying all over the place!
The Gargon’s a lobster without any face in
Teenagers from Outer Space!

Because Warner Brothers allowed the copyright on this film to lapse, you can enjoy it guilt free on the YouTube machine. Go ahead and watch it; you’re not stealing from ANYONE. If Teenagers from Outer Space does not seem like it’s your type of film, here are two other “Teenager” films that I recommend for today:

Pump Up the Volume