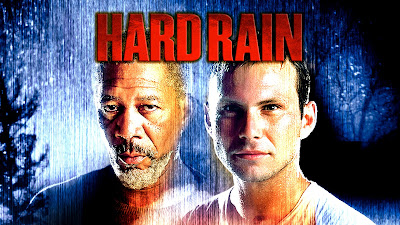 The review duo who will cooperate and evacuate during a flood.

Adam: This week, we return to our series looking back at notorious box office failures with 1998’s Hard Rain, an action-disaster movie directed by Mikael Salomon (the cinematographer for The Abyss, Backdraft, and Far and Away) starring Morgan Freeman, Christian Slater, Minnie Driver, and Randy Quaid. Christian Slater plays an armored car driver who gets caught up in a robbery by a group of thieves led by Morgan Freeman. With the town completely flooded, Slater must evade the thieves and the corrupt local sheriff’s office, led by Randy Quaid, who want to claim the money from the armored truck for themselves.

I watched a lot of action and disaster movies in the 1990s, but Hard Rain was one that escaped me all these years. I always meant to track it down but just never did. It must be that the film’s reputation was so poor at the time of its release that I just eventually forgot about it. I’m a big fan of Christian Slater and Morgan Freeman, but I’m sorry to say that this is not one of their better movies or performances. The Christian Slater part could have been played by anyone. It’s missing the “Gee whiz, I’m an action hero” pluckiness the actor brought to his similar role in Broken Arrow. Morgan Freeman, on the other hand, is either giving a misguided performance or just has a poorly written role in Hard Rain. He’s meant to be the main villain but he’s so benevolent by comparison to the surprise villain that Freeman becomes this weird outlier in a movie for which he’s top-billed. Faring best is probably Minnie Driver, because she’s lively in a film where most of the cast seems openly miserable. I don’t blame them. I felt bad for the actors in Hard Rain. They’re constantly soaked. Did anyone get sick on set with a cold or, even worse, pneumonia? If so, this movie wasn’t worth it. Hard Rain has the unique disadvantage of failing at being a disaster movie (not enough flood related obstacles) and a standard late-'90s Paramount Pictures action flick because with flooding you’re kind of limiting the kinetic energy an action movie requires. 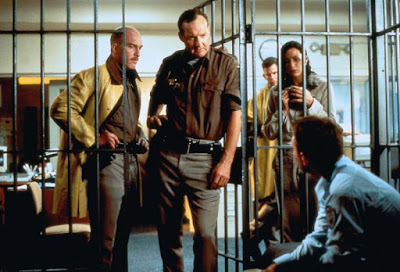 Rob: Hard Rain is the most frustrating kind of bad movie. It doesn't make me angry. It doesn’t make me laugh. It’s just there, leering at me and wasting my time. I actually laughed out loud at about the halfway mark, when Christian Slater looked at his watch in a key scene. I felt that.

As you say, the characters are vanilla, the action is uninspired, and it lacks the creativity to reward the “heist thriller during a disaster movie” premise. It’s a fugazi Speed clone, essentially, something churned out by studio executives looking to profit from that film’s success without understanding what made it work. Nearly every creative choice feels like a concession to mediocrity: Slater should be in danger, but never too much danger. Freeman should be ruthless, but never too ruthless. Every action scene should be a variation on “They’re tied to something and need to get untied before they drown!” because anything else could seem too complicated for grandma. This thing has no balls. It can’t decide whether to zig or zag, so it just sits still.

As much as I hated watching it, though, I appreciated that Hard Rain ends up being a kind of unintentional indictment of late ‘90s studio filmmaking: “Get the Speed guy [screenwriter Graham Yost], get a plucky actor like Keanu, get a rising starlet like Bullock, and...I don’t know...Betty White, I guess? Just do Speed again!” But you can’t! Good filmmaking is alchemical, and Hard Rain feels like a cynical production that deserves every bad review it got.

Speaking of Betty White: What did you think of the supporting cast? Did you have a favorite backup player? This cast is like Twin Peaks-level colorful, at times. 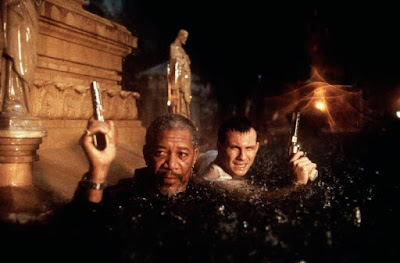 Adam: I honestly didn’t have a favorite supporting character. The backups are written like David E. Kelley characters which means they’re winking at the audience. That’s not my cup of tea. As for Betty White, I’ve seen her in Lake Placid, Bringing Down the House, The Proposal, etc. I know this is sacrilege, but I’m just not a fan of her shtick in movies. It’s even worse because people swear its top-notch comedy and I just sit there stone-faced at every line delivery. Humor is subjective; so be it.

Have you read the Wikipedia page for Hard Rain? It’s more entertaining than the movie. I like how grumpy Morgan Freeman is that the studio re-shot the ending after audiences complained during the test screenings that his character didn’t live and get some money at the end.

Rob: I liked how angry he got at the idea that “we listen to [the audience] now.” I wonder how he feels about how that’s gotten worse 22 years later.

Adam: Two questions for you:

1. What’s your favorite thing about Hard Rain? Mine is the Jars of Clay song at the end credits because it’s a good song and because it meant the movie was over.

2. The movie opened poorly before going on to be a box office bomb (it made $19.9M on a $70M budget). Is Christian Slater not strong enough of a lead in an action movie?

Rob: I liked how the Ricky Harris character ran out of situationally-appropriate Bible quotes and just started going with Bruce Springsteen lyrics. Like you said, he’s one of those characters whose whole deal is just mugging to the audience, but I appreciated how a legitimate bit just turned into a shrug.

Adam: As a Bruce Springsteen fan, I found that part tough to watch. 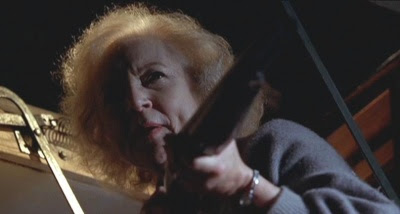 Rob: For the second question, I’ve been thinking a lot about that, and my guess is that Slater has a little too much of that oddball persona to be the everyman. It’s the Jack Nicholson thing, right? My favorite lead performances of his (True Romance and Pump Up the Volume) embrace his idiosyncratic side, and stuff like Robin Hood: Prince of Thieves or Interview with the Vampire play him off more traditional leading men, which only accentuates that difference. I like him a lot, personally, but I think I understand why he might have more of a niche appeal.

What do you think of Mikael Salomon as a director? This was one of his only major theatrical efforts before switching over to TV. Personally, I think he got a bad break with Hard Rain. I noticed that it’s not listed on his Wikipedia page until the “Filmography” at the end. That probably shows his level of affection for the project.

Adam: It’s difficult to say. I haven’t seen A Far Off Place or Freezer. I think he’s a terrific cinematographer, though. Far and Away is one of the most gorgeous movies I’ve seen, and I don’t just mean Nicole Kidman. I think he was betrayed by a bad script here and studio/test screening meddling where it came to the ending. You can tell he’s competent enough where he should have gotten more chances, but you could say that about many directors.

Rob: Agreed. I’m glad that he continued to work in television, at least. Alright, we’ve already devoted more time to Hard Rain than anyone should. We have a special Reserved Seating next week, right?

Adam: We do. We’re discussing a new documentary about a dying indoor shopping mall and the people who work there called Jasper Mall. It’s from the director of The Rock-afire Explosion. Until next time…