Two for One: VELVET BUZZSAW & A BUCKET OF BLOOD 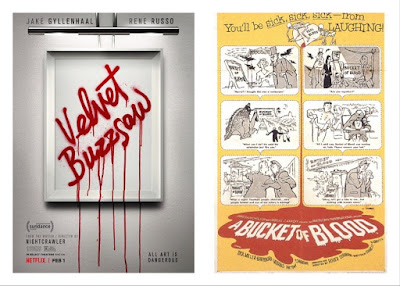 “What's the point of art if no one sees it?” - Josephine

I'm a creator. I've written musicals, plays, screenplays, songs, etc. When I first started playing music 30 years ago, the intent was to make a living doing it. By the time I finished my first musical, I felt more successful than I ever had in my entire life. Would it ever be performed? I had no idea, but the night I typed the word “END” I knew it didn't matter if no one ever saw this thing on which I'd spent a year of my life. For me, and I think for any true creator, the end goal isn't accolades or money. Those things are nice, sure. My wife and I have this conversation every so often. If I'm not writing words or notes, I'm not me. It's part of who I am. So the quote from Josephine in Velvet Buzzsaw at the top of this article is perfect because this double feature isn't about creators who have to create. 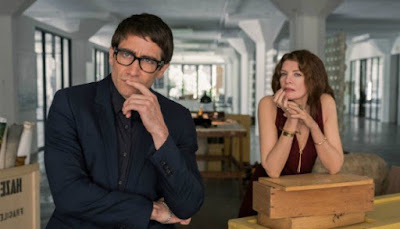 Let me start by saying, I'm in the minority when it comes to Buzzsaw. I unabashedly love this movie. It's a cult movie whose cult is, as far as I know, only me. I think writer/director Dan Gilroy followed up his hit Nightcrawler with something that was so on the nose and ahead of its time that it'll take several years for people to fully appreciate Buzzsaw. If you've never seen it, the short description goes like this: “cursed paintings kill art snobs.” What does the title mean? Absolutely nothing. That's the joke. An exchange between Renee Russo and Daveed Diggs goes like this:

“Velvet Buzzsaw.”
“The name was catchy.”
“Then what, self parody?”

Looking back at Nightcrawler, Gilroy is obviously saying something about obsession. There he's talking about media's (and in turn, the public's) obsession with grisly violence (car accidents, murders, etc.). In Buzzsaw, he smacks his audience in the face with a nail-studded 2x4 and shows us how obsessed we become with entertainment. Russo has another quote during that same scene with Diggs: “I get the joke. None of this is new. It's all been done since someone charged a bone to see the first cave painting.” Gilroy is so self-aware and blunt about our addiction to entertainment that I think it rubs many people the wrong way. Personally, I love it. Because he's not wrong.

For the second feature of this double I immediately thought of Roger Corman's cult classic A Bucket of Blood starring the incomparable Dick Miller. Corman is the King of the B-movie, and for good reason. He makes them fast and cheap. Many aren't good at all, but this is one of his classics. It's not great; it's very cheap. But back in 1959 Corman saw the same thing Gilroy saw 60 years later. Corman focuses more on the actual artist in Bucket, but the satire cuts just as good now as it did then. Miller plays scrawny and meek busboy Walter Paisley (the first of six times). He works at a beatnik coffee shop where all the artists hang out. All Walter wants is to become a famous artist. One day he accidentally kills a cat, molds some clay over it, and presents it as art. People go wild for it and the admiration becomes like a drug, driving Walter kill again. “Do you really like it?” Walter keeps asking. He has zero confidence and can't believe, no matter what people say, they actually think his art is good. As Walter kills/creates more, the accolades grow. He develops a false sense of confidence and asks a woman out. When she turns him down he decides to kill her. It's at this moment I realized that Walter Paisley is an incel. 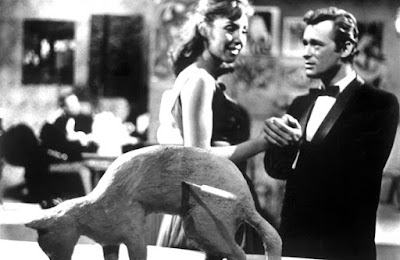 Both Buzzsaw and Bucket pose the question, “How far will we go to be accepted into a niche crowd?” Jake Gyllenhaal plays art critic Morf Vandewalt in Buzzsaw (the movie is full of the most pretentious character names) who “sells” good/bad reviews for sex/art/rights/etc. Josephina (Zawe Ashton) steals a dead man's art to sell. In Bucket, Leonard de Santis (Antony Carbone) tells Walter he can sell his art at his cafe, and they'll split the profits 50/50. After he discovers Walter's secret, while scared of him, he still offers Walter a show. Both of these films have hysterically biting satire. While Bucket is cheap, Dick Miller is great as always, and Carbone is especially funny after he discover's Walter is killing people. Buzzsaw includes a stacked cast of people having tons of fun with the material. Everyone takes their character (based on real types of people) and basically says, “This is how you! This is what you look like! This is how you sound! Idiots, the lot of ya!”

These two films may portray the visual art world specifically, but they're a look in the mirror. Why do we paint or compose songs or act or write? Why do we collect paintings or movies or records? My answer to the first question is because I have to. The second question is more difficult. It's obvious I'm part of consumer culture (hello Criterion sale!). I tell myself I collect movies because I learn from them. Which is true. But does the obsession (addiction) to buying Blu-rays own me? “No death. No art.”
Posted by Patrick Bromley at 12:00 PM