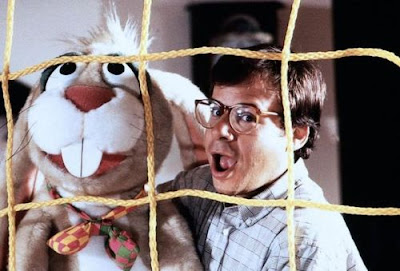 This is another one of those Sister Act/Housesitter weeks.

Adam: Welcome back to Summer ‘92 Redux, our revisit of the Summer 1992 movie season. This week, we’re discussing the sequel to the sleeper hit Honey, I Shrunk the Kids titled Honey, I Blew Up the Kid. The follow-up was directed by Randal Kleiser, who directed Grease, to which Honey, I Blew Up the Kid pales in comparison. Returning from the original are Rick Moranis as inventor Wayne Szalinski, Marica Strassman as Wayne’s wife Diane, and Robert Oliveri as their nerdy son Nick, who’s now a teenager. New additions to the cast are Lloyd Bridges, Keri Russell in her film debut, and John Shea as the heavy who is too good at his job because I wanted to fast-forward his scenes the moment he and his awful ties made contact with my eyeballs. The titular kid that was blown up (like a 35mm print to 70mm, not like Michael Bay explosion) is a toddler named Adam (no relation) played by twins Daniel and Joshua Shalikar. This is their only movie. They dropped the mic after Blew. I’m a little grumpy writing this review. That rhymes!

Like every child I knew of the ‘80s and ‘90s, I have nostalgia for the original Honey, I Shrunk the Kids. It’s not a movie I loved upon revisit a few years back, but it’s a fun premise and the special effects at the time were...well, special. Plus, it’s prime Moranis, who's an actor we all miss seeing in films. Honey, I Blew Up the Kid doesn’t have any invention (no pun intended) left, really. It’s a movie made from obligation because the first movie was a hit. It has an opposite premise from the original but this time it does surprisingly little with it. The baby grows, he ruins the house, and then he goes to old Las Vegas. The sequences aren’t memorable like in the first one, where I can recall Nick in the bowl of Cheerios or riding on a bee with his sister. On this revisit of Honey, I Blew Up the Kid (which I haven’t seen since 1992 or 1993), I kept thinking about all the run-off Disney sequels of the ‘60s and ‘70s. This is a throwback to those if I’m being generous; but man is Blew a slog. It’s also a dingy looking movie, which doesn’t help.

What did you think of the movie? Was your favorite part also that Bill Moseley showed up as a Federal Marshall and told Keri Russell to quit her bellyaching? 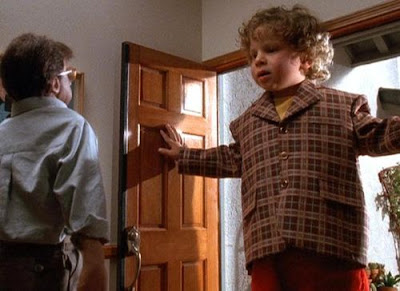 Patrick: This was my first viewing of Honey, I Blew Up the Kid, because I had no desire to see it back in 1992 and haven’t had any desire ever since. I skipped the rest of the Honey franchise, including Honey, We Shrunk Ourselves and the TV series based on the movie. This really seems like a one-and-done idea. I will say that it made me happy to see some names in the opening credits of a Disney summer movie, including Albert Band, Stuart Gordon, Brian Yuzna, and Thom Eberhardt, who contributed to this movie’s screenplay and is responsible for writing and directing some great movies like Sole Survivor, Night of the Comet, and The Night Before. Those credits were my favorite part of the movie.

This is a lazy sequel. I get that it would have technically been even lazier to make Honey, I Shrunk the Kids...Again, but I think I probably would have preferred that to what they do here. There is a lot of imagination and inventiveness that came along with making the kids tiny in the first film. It’s a good adventure movie with amazing effects. There’s nothing imaginative or inventive about Blew Up, which, at its best, recalls some of the “giant” B-movies of the 1950s (minus the incredibly hacky/racist “Godzilla” joke) and, at its worst, bores the shit out of me. I appreciate that they got the original cast back to play the family because I’m a sucker for that kind of thing, but there’s so little else here for me. Is this movie well liked? Or even remembered at all?

Adam: I don’t think it’s remembered all that much. I vaguely recall when it was released that it was seen as forgettable but not maligned like Ghostbusters II for example. I have an odd question, but it’s the only thing I feel like there’s left to discuss with this movie: I think the toddler is a good actor??? Maybe I’m just reacting to a baby because it’s a baby, but I felt really bad in the scenes where he’s in danger or hurt and that was largely based on the kid’s reaction shots. I guess you’re not really supposed to critique child performances for kids that little, but there’s something about this kid that made me care. He crushes the delivery of “No Nap!” I remember there was a kid extra in Godzilla (2014) where I also thought “He might be giving the best performance in this movie after Cranston.” How are we supposed to judge toddler acting? Or are we not supposed to at all? Is there an age cut-off where it’s considered acting as opposed to prompting? 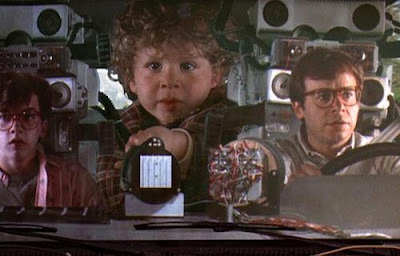 Patrick: There are different standards when it comes to child acting, because sometimes a great kid performance gets dismissed as a kid just being a kid. I remember that with Beasts of Southern Wild -- people were saying Quvenzhané Wallis didn’t deserve any awards consideration because it wasn’t acting, just a natural state of being young. I’m a little more indifferent on the kid in Honey, I Blew Up the Kid. He’s cute and does a good job, I guess. I just can’t see past how much I didn’t enjoy this movie. It’s so cheap looking and stupid. Randal Kleiser has some real Garry Marshall tendency in terms of his sense of humor, but this movie lacks the sweetness of even the worst Garry Marshall joints.

Adam: “It’s so cheap looking and stupid” is precisely how I feel about this movie. Let’s stop talking about it. I’m going to lean towards “no” on rewatching Godzilla (2014) unless you have an inkling there’s something there for you to rediscover. 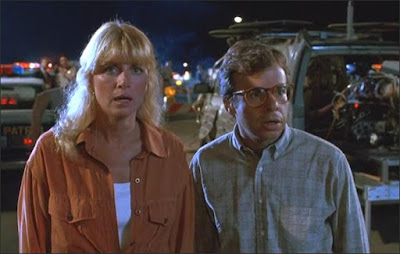 Also released this week in 1992 was Man Trouble, starring Jack Nicholson and Ellen Barkin. It’s scarcely available nowadays so I didn’t watch it for the column. The DVD costs $28! I did watch the Sidney Lumet Touchstone Pictures thriller A Stranger Among Us starring Melanie Griffith. She plays a detective who goes undercover in the Hasidic Jewish community in New York City to solve a murder. It’s very very okay. Griffith ladles on the Breathless Mahoney in some scenes where she’s trying to hook up with one of the men in the Hasidic community and he’s all “It’s not gonna happen” and she’s all “You can’t resist this buddy boy!” It’s the most Touchstone Pictures movie ever made. Have you seen either of these?

Patrick: I saw Man Trouble back when it was on HBO in the ‘90s but can’t remember it very well; I think I have it on DVD somewhere as part of a double feature with Class Action. Maybe I’ll revisit it. I don’t recall liking it but I can watch Jack Nicholson in anything and it reteams him with Bob Rafelson. I’ve never seen A Stranger Among Us. This was a weird weekend at the movies.

Adam: So many weekends during Summer 1992 were weird weekends. We’ll be back next week with a revisit of Mo’ Money. Get ready for a deep-dive Damon Wayans discussion. See you next time!
Posted by Patrick Bromley at 5:00 AM