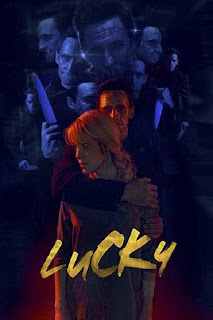 A horror movie sure to launch a thousand thinkpieces.

Earlier this week, I watched and reviewed the new dark comedy The Columnist out of this year's Fantasia Fest and described it as being about the horrors of being a woman on the internet. Well, here's Lucky, the new feature from director Natasha Kermani (Imitation Girl), about the horrors of being a woman every single day. The movie, which is also playing Fantasia this year, is sure to upset some men, who are depicted in the movie as either worthless cowards or dangerous predators, but that's kind of the point. Lucky isn't concerned with how men feel. It's a movie about what it feels like to navigate the dangers of the world as a woman, and there are a lot of dangers.

Brea Grant, who also wrote the screenplay (and directed 12 Hour Shift, making her the queen of Fantasia Fest 2020), stars as May, a kind of self-help author whose marriage to her husband (Dhruv Uday Singh) is showing some major cracks. There are cracks all over May's life, really, from the plate that breaks in her hands at the outset to the shard of glass mysteriously sitting on her coffee table. As difficult as keeping her marriage together has become, May has bigger problems: there's a masked man who shows up at her house every single night and tries to kill her. Her husband is used to it and unfazed, going so far as to leave when he doesn't approve of her reaction to the threat. That leaves May alone to fight off the intruder...again...and again...and again...and again... 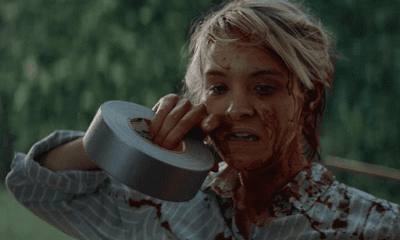 Like other recent horror films including The Babadook and It Follows, Lucky is the sort of movie that's designed to function as much metaphor as it is movie. While it functions as a slasher film, it's sometimes more effective as a semiotic exercise -- what the movie is trying to say is more compelling than what's happening on screen. That's not to take anything away from the action: the masked killer is sufficiently creepy, and director Kermani stages the attacks with a good deal of tension and suspense. That's all the more impressive considering we know he's coming and we know what the outcome will be, which could be said of just about any slasher movie, making Lucky a kind of meta-commentary on the subgenre. At times, though, the metaphor overtakes the drama, particularly in the final third when characters make choices I couldn't fully understand as a means of expressing the themes. Then again, it's not like those choices weren't set up from the very beginning. It's right there in the title of the book. 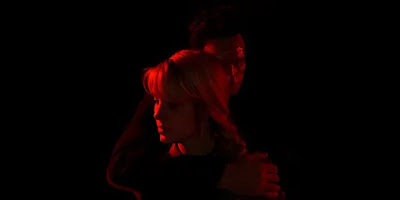 Lucky is not a subtle movie. It's going to upset some viewers, more than likely men, who are unhappy about the way they're portrayed on screen. Remember, men, you are not victims here. The purpose of the film is to try and generate empathy -- to communicate what it feels like to be under attack every day, both literally and metaphorically. That it does so under the guise of an effective horror film makes it that much smarter -- a spoonful of sugar and all that...or, in this case, blood. Kermani and Grant have made a movie that demands to be seen and deserves to be examined and discussed. It's provocative and it's powerful. We need to hear what it has to say, but more than that, we need to feel it. These women aren't "lucky" just to escape with their lives. There's always a next time.
Posted by Patrick Bromley at 12:00 PM