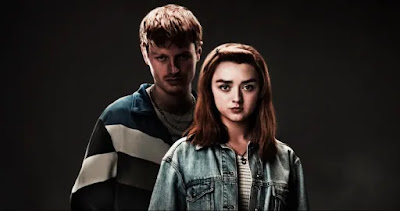 The Owners, the new thriller from co-writer and director Julius Berg, joins films like Don't Breathe, The People Under the Stairs, and The Collector in the "you broke into the wrong damn house" subgenre. The entries in this particular subgenre may be limited, but the results are almost always the same: bad people doing a bad thing run into trouble when they come across worse people doing worse things. The Owners is no different.

Maisie Williams, who can also currently be seen on movie screens in The New Mutants for those brave enough to venture out to theaters, stars as Mary, a young woman who finds herself wrapped up in a crime when her boyfriend Nathan (Ian Kenny) robs a house with two of his mates. Unfortunately, the owners of the house (Sylvester McCoy and Rita Tushingham) come home in the middle of the robbery, causing everything to go more or less to shit. 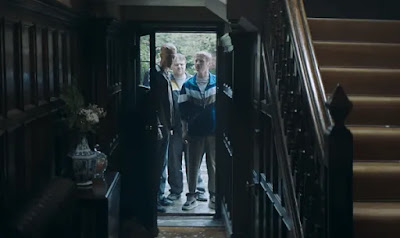 The Owners is the kind of film about which the less is said the better, because twists and surprises are a big part of what it has going for it. Because we know what movie we're watching, we know that things won't turn out well for our amateur thieves, but we don't know exactly how things won't turn out well. There was a point about halfway through at which I had no idea where the movie was going, and while where it eventually landed didn't really surprise me, I appreciate those moments of uncertainty in a movie. The more that films rely on formula, the more films I see, the more I come to treasure the ones that can buck expectations.

There's a real nasty streak that runs through the movie, too, punishing even those characters who might not deserve it as much as some others. There are no rules about who can be hurt and who can't, again adding to the film's unpredictability. Once you realize that the film embraces such nihilism, though, it becomes fairly easy to anticipate where things are going. The Owners is well made and certainly a nasty and mean-spirited piece of work, but pretty underwhelming in what it has to say about the state of the world. We get it; everything's the worst. I only have to open my front door to confirm that. Too bad I can't open my front door. See? Everything's the worst. 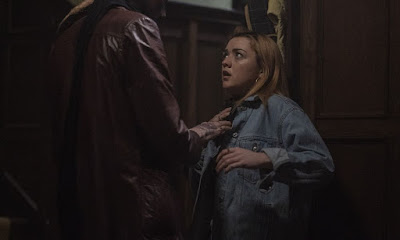 The Owners is a well-done little home invasion gone awry story, one that gets more demented as it goes along (always a welcome quality in a movie) and offers good performances as well as some unexpected turns. That I can't recommend it more highly has more to do with personal bias and the fact that there are just so many fantastic indie horrors to be released this year that it's difficult to go too hard to bat for one that's just decent. Other entries in this (admittedly limited) subgenre have covered similar material with more invention or more technical skill, and all of them were able to places that this movie doesn't. Once you figure out what The Owners has in store, it's just a waiting game to watch it play out.

The Owners is playing in limited theatrical release and on VOD starting today.
Posted by Patrick Bromley at 5:00 AM