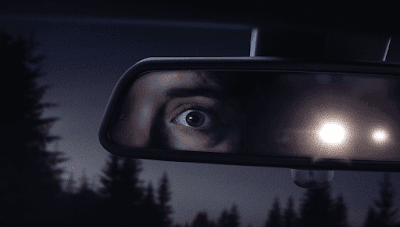 This is why I'm never leaving my house again. Well, this and the pandemic.

While perusing titles to review as part of this year's Fantasia Fest, I came across Alone. I knew nothing about it but the title and the fact that it's the latest film from director John Hyams, which was all I need to know. As the filmmaker behind Universal Soldier: Regeneration and Universal Soldier: Day of Reckoning, Hyams is responsible for two of the best and most audacious action films of the 2000s. I will follow him anywhere. Alone rewards this position.

Jules Wilcox stars as Jessica, a woman moving to a new state following a tragedy in her life. She encounters some trouble with a black truck on the highway (shades of Spielberg's Duel), driving aggressively and seemingly singling her out. Eventually, she meets the driver of the truck (Marc Menchaca), who is trying to be nice but is clearly...off. He keeps finding her every time she stops, until she's finally run off the road and he finds her again, this time making his intentions clear. Now, Jessica will have to use all of her wits and strength to survive both the wilderness and the man who will surely kill her if her gets the chance. 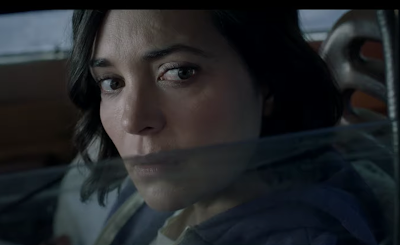 Alone is a very straightforward survival thriller, but it's done with such skill and confidence that it stands above its contemporaries. John Hyams is such a good director that he's able to craft a relentlessly tense, grueling experience from a mostly familiar format, turning highways and rivers and woods into terrifying, dangerous landscapes (a scene involving a stick and a foot is among the nastiest things I've seen in a movie this year). There's nothing inherently claustrophobic about the movie's locations, but Hyams and cinematographer Frederico Verardi continually close the space by making Jessica unable to escape the man following her, even when it's seemingly innocuous -- and all this despite time again using the full width of the screen to showcase the vastness of these open spaces. There's something especially scary about having nowhere to hide even when there's everywhere to hide.

Like several of the films I've seen as part of this year's Fantasia Fest (including The Columnist and Lucky), Alone examines the horror of being a woman who is harassed and attacked by a man. Even before things turn threatening for Jessica, the Man (who is unnamed in the film, because his identity ultimately doesn't matter) won't stop approaching her, won't leave her alone despite her requests that he do so. It's only a matter of time, the movie demonstrates, until that attention turns violent. While there are sympathetic portrayals of men in the film (#NotAllMen), it's clear that the Man is preying on Jessica because of her gender, not because of anything personal. Being a woman alone can be a terrifying experience, one which this film presents in the guise of a thriller that's not all that far off from real life. 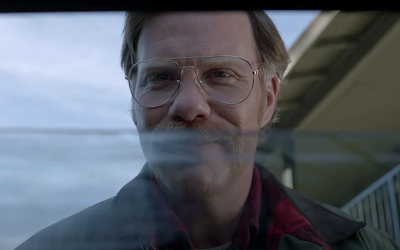 Alone is proof that an expertly executed premise, no matter how simple, is enough to make a good movie. Hyams has been experimental before -- Universal Soldier: Day of Reckoning reinvents the action film as a cross between David Lynch and Gaspar Noe -- but here leans into his inner Hitchcock, relying on technique and precision to support the genre in which he's working, not subvert it. There's so much skill on display from everyone involved both in front of and behind the camera, not to mention a healthy dose of subtext, for Alone to be a good deal more than your average thriller. It doesn't let up.