I was working in the lab late one night... working on this playlist!

Those of you who have been reading my columns, listening to those podcasts in which I take part, or follow me on the Twitter machine (@JBFTHISMOVIE) probably know that I have something of a JONES for Halloween music. For the past twelve years or so, I have annoyed and nauseated both friends and family members by “gifting” them with a Halloween CD about this time. (“Oh look,” I imagine them yawning, opening the package, and tossing the discs in the trash in a single motion, “I guess JB is still alive.”) This year’s “mixes” represent the 17th, 18th, and 19th attempt at “The Ultimate Halloween Listening Experience.” Some years (like a year characterized by quarantine) result in more than one disc. Because I am never one to leave things to the last minute, I already have rough versions of the Halloween discs for 2021, 2022, 2023, 2024, and 2025.

FULL DISCLOSURE: I realize I am woefully behind the times with my retrograde compact disc/physical media focus. God knows by now, I should be utilizing “THE CLOUD” and/or the Spotify Machine to broadcast my playlists through neighbors’ and strangers’ smart speakers whether they want to hear them or not... or I could implant the music directly into people’s brains, like Dr. Frankenstein on a good day, with a lukewarm soldering iron, a small computer chip, and some needle and thread. But no—I continue with actual discs... and actual cases... and actual covers. You know, something you can actually hold in your hand. 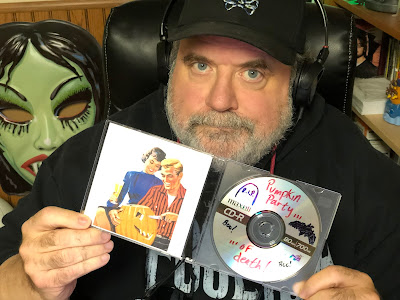 As I look over these crazy discs, starting with “Pumpkin Party... of Death” in 2009, I realize that there are songs that stand out as personal favorites that I would like to share with all of you today. As befitting the season, these songs are all treats with no tricks. Here are my thirty-one favorite Halloween songs in rank order: one for every day in October!

1. “Halloween Spooks,” Lambert, Hendricks, and Ross. My very favorite Halloween song. A largely forgotten, fun, and obscure song from a great acapella jazz vocal group. I had been listening to this ditty for decades, so I was surprised this year when the “Ross” of the group, Annie Ross, passed away. Turns out she was also an accomplished actress; she plays troubled Lori Singer’s troubled mother in Robert Altman’s Short Cuts. Yeah, that Annie Ross!

2. “Grim Reaper of Love,” The Turtles. God, I love this song with all of my black little heart. Originally released as a B-side, it’s not nearly as well-known as their hits (“Happy Together,” anyone?) but it just isn’t Scary Movie Month unless I get to hear this crazy ditty and sing along. “Killing the living... and living to kill” indeed!

3. “Monster Mash,” Bobby “Boris” Pickett. Oh, God—I cannot wrap my mind and my ears around the tsunami of monster mediocrity that this little ditty unleashed when it entered the Billboard charts in 1962. Every garage band on earth quickly wrote some monster lyrics to a song they had been fooling with and released it, hoping to catch lightning in a bottle like the original “Mash” did. None of those other wanna-be songs did; “Monster Mash” was a one-hit wonder for Pickett, though he tried and tried to follow it up with songs like “Monsters Holiday,” (a Christmas song) “Monster Swim,” and “Monster Rap” in 1985.

“Monster Mash” was responsible for a river of independent label 45’s flooding the market in the early sixties: “Coolest Little Monster” by horror host Zacherle, “My Baby’s Got a Crush on Frankenstein” by radio personality Soupy Sales, “Frankenstein Meets the Beatles” by Dickie Goodman (under the pseudonym “Jecky & Hyde), “The Goo-Goo Muck” by Ronnie Cook, and hundreds more.

5. “Don’t Fear the Reaper,” Pat DiNizio. I realize the Blue Oyster Cult original is much more famous (cowbell and all) but DiNizio’s version is transcendent. Unfortunately, it’s very hard to find, released only on a limited, expanded, 2 CD version of his solo album, This is Pat DiNizio.

6. “Jack You Dead,” Louis Jordan. Big boisterous fun from the rhythm and blues bandleader who just MAY have invented rock and roll...

8. “Body Snatchers,” Radiohead. My lovely wife and son are ten times the Radiohead fans than I am, but goddamn does this song kick major ass.

9. “Tonight... is the Night I Fell Asleep at the Wheel,” Barenaked Ladies. Great, creepy fun from one of the best live bands of the early Eighties. I love how much this simple song commits to the bit. “I guess it’s all over now, ‘cuz I’ve never seen so much BLOOD.”

10. “Immortal Me,” Bryan McElroy. Another case of personal bias, Mr. McElroy is a former student, and we have been playing this one on Scary Movie Night for what seems like decades. This song defines “fun cheese.” The fact that he actually made a music video is just icing on the cake.

11. “Paradise Circus,” Massive Attack. I cannot claim credit for this creepy, creepy thing; my wife discovered it and suggested it was perfect for Halloween. “Oh, yeah... the devil makes us sin, but we kind of like it when we’re spinning... in his grin.” 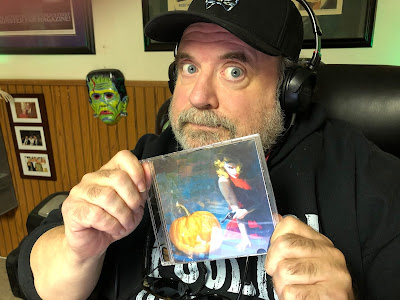 13. “Graveyard,” Trip Shakespeare. God, I was sad when this band broke up. Independent road warriors/Cabaret Metro regulars Trip Shakespeare were always running late. I remember friends reporting live shows in the Eighties starting three hours past the posted time or more. But what a band and what a sound. Half of them later became Semisonic and had a big hit with “Closing Time” in 1998.

“If you go walking in the land between my arms
You will find a graveyard, little graveyard
Since no light shines there, I'm afraid you'll come to harm
In the holes you find there, and the ground is cold and hard.”

14. “You’re Dead,” Norma Tenega. A largely forgotten, fifty-year old New Zealand folk song is resurrected to play over the opening titles of the smash comedy film What We Do in The Shadows. It’s the FX television show’s theme too. Sublimely Halloween-y.

16. “Season of the Witch,” Donovan. Yes, it’s overplayed (It’s featured in Blues Brothers 2000, for Christ’s sake.) but this is a great song, sung by a great singer. Just a few years back, Donovan was the featured guest at Beatle Fest, and he regaled the crowd with entertaining stories and impromptu song snippets for hours! (Some night when you are canoodling about on the YouTube machine, check out Joan’s Jett’s version.)

19. “Devil’s Whisper,” Raury. A happy accident—Steven Colbert had Raury on his talk show one night as musical guest. Raury played THIS. Gee.

20. “The Irish Ballad,” Tom Lehrer. Rickety-tickety tin, indeed. When I was a teenager, this song used to give me nightmares.

21. “Moonlight Desires,” Gowan. Thank God for WolfCop, Patrick Bromley, and Scary Movie Night for making me aware of this song and cementing it into my sub-conscious. You haven’t lived until you’ve seen our own Adam Thas lean way back and sing along with our friend Gowan.

What is Gowan doing now? Why, he is currently lead singer in the touring version of Styx. Do you think he ever sings “Moonlight Desires” as a Styx live concert encore? I’d like to think he does. I can dream, can’t I?

22. “In Hell, I’ll Be in Good Company,” The Dead South. I first saw this in a movie theater because some cell phone company turned the music video into a commercial for itself. (T-Mobile? Verizon? Which of these?) Then I saw it over and over and over in the next few months because before the Corona, I went to the movies a lot. Terrific song and fun music video to boot. 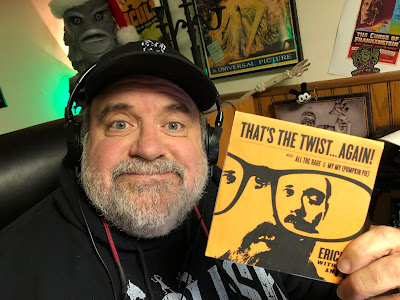 23. “My, My Pumpkin Pie,” Erich with an H. Our very own troubadour, King Asperschlager, with a song that, once you hear it, you cannot get out of your head. Try an electric drill. You can find all of Erich’s fine work on the Band Camp machine. Make sure that you pay for it; good music is seldom free.

24. “Excitable Boy,” Warren Zevon. I realize that Zevon’s “Werewolves of London” is the true Halloween perennial, but this is the better song, isn’t it? It’s certainly funnier.

25. “Spooky Movies,” Roy Clark. The subject of some discussion a few weeks ago, when friend of the site Mike Piccoli told me how much he liked this song from a previous Halloween CD. This song, I would argue, is the definition of old-fashioned fun. In my TedTalk today I will prove...

26. “Death to Death Metal,” Witch Taint. Personal bias here raises its gigantic, balding head. La Sinestra, maven of backing vocals for the Taint, is also a former student. She’s charming, delightful, and talented. Check out the band’s live shows on the YouTube machine. I bought their CD from the Band Camp machine, and they sent me an AUTOGRAPHED CD and a BUTTON. Jealous? 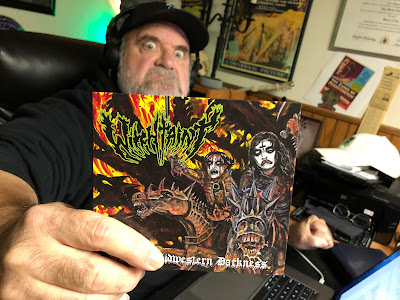 27. “I Drink Your Blood; I Eat Your Skin,” The Exotic Ones. I used to enjoy The Exotic Ones live every year when I attended Wonderfest in Louisville, Kentucky. They are the band that plays the theme to Dr. Gangrene’s wonderful horror movie showcase, which he would present live every year on the Saturday night of the Convention. The Exotic Ones also do a killer cover of “The Green Slime” and have released it as a killer 45... on green vinyl. Covid sucks.

28. “Drac the Knife,” Gene Moss. WARNING: Once you hear Bela Lugosi impersonator Gene Moss’s parody version of “Mac the Knife,” you won’t be able to stop yourself from peppering your everyday conversation with the word “sure.” Part of Moss’s impression involves sticking that word in everywhere... and it’s contagious. I warned you. Sure.

29. “Ghost Town,” The Specials. A very conventional pick, I admit, but this great New Wave ska band provided the soundtrack to my first two years of college. Their first album is one of the great rock debuts of all time, produced by Elvis Costello! “This town... is coming up a ghost town.”

30. “Witchcraft,” Marvin Gaye. Many artists have recorded this song; I think Gaye’s version is the best, and it reminds us that besides being one of the preeminent singer/songwriters of the early Seventies, he was also a great interpreter of other composer’s songs. (“I Heard It Through the Grapevine,” anyone?) I love the odd horn arrangement here. “And although I know it's strictly taboo, when you arouse the need in me, my heart says: yes, indeed in me--Proceed with what you’re leading me to...”

31. “O Willow Waly,” Isla Cameron. Creepy as the day is long, and a special treat to those of you who have been enjoying The Haunting of Bly Manor on Netflix this month...
AN ANNOYING AUTOBIOGRAPHICAL PAUSE: As I mentioned above, I’ve been making these CD’s for friends for over a decade. Near the end of my teaching career, I met Bruce Janu, who hosts and programs an internet radio station called Vinyl Voyage Radio. (http://www.vinylvoyageradio.com )

It’s two tons of fun, and all of you should listen to it... listen to it a lot... to the point where you neglect your job and personal hygiene. Every October, Bruce takes my Halloween CD’s and, using computer magic, plays them on his radio show and then posts the whole shebang to the Sound Cloud machine. I don’t know how this works. I secretly think it’s the work of sorcerers and elves... but for the next few Fridays, he’ll be featuring my programming every Friday night on his show. Check it out.
Posted by Patrick Bromley at 5:00 AM