What Is It About BRAINSCAN? 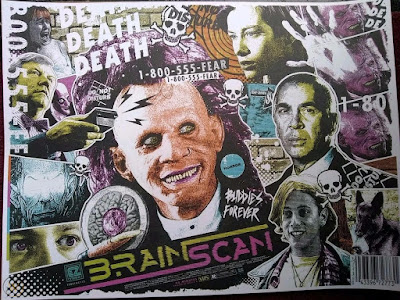 My exploration of a movie I’m not sure I love but can’t stop watching.

Occasionally, a concept for a movie is so much your bag that the quality of the film itself is almost secondary. Personally, no movie in my youth exemplified that more than Brainscan. It represented a Venn diagram of things I was interested in at the time: horror movies, grunge and heavy metal music, video games, anyone involved in Terminator 2: Judgment Day, erstwhile Skeletor Frank Langella, etc. From the moment I saw T. Ryder Smith as The Trickster, a sort of Freddy Krueger wannabe who dresses like Prince, it all made sense to me. The Trickster was going to be the next big thing in horror, and it was a privilege to be there from the beginning. I didn’t get to see Brainscan in theaters (it played at my neighborhood theater that didn’t allow 11-year olds entry into R-rated movies without a parent), but I caught up with it on video. It wasn’t the movie I thought it was going to be. 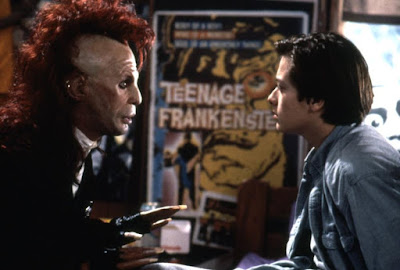 From the ads, I thought The Trickster was going to be a slasher icon. Instead, he’s more Brainscan’s equivalent of The Silence of the Lambs' Hannibal Lecter who comments and prompts the action but isn’t directly the villain. That was a bit of a letdown. The movie focused a lot more on Edward Furlong in a role player game type of scenario killing random people, eliminating witnesses and hiding the clues to his crimes. Also, he was pining for a girl next door in a pervy Rear Window homage. Brainscan didn’t give me the cyber thrills I expected. It felt pedestrian to the version I built up in my mind. For years I chalked up Brainscan to be a failure of a movie that just happened to have an intriguing concept. But then I kept wanting to watch it again and again on video and cable. I knew it was “bad” (Edward Furlong at one point chugs milk frantically while coming down from an RPG rush), but I wanted it on. It made me happy despite the quality of the movie. I’ve had many films like this over the years, but Brainscan is a vivid example. I was more excited to buy the Scream Factory Blu-ray of this film than the collector’s edition of Misery despite thinking the latter is one of the best horror films of the 1990s. So why Brainscan? I think I’m still hopelessly rooting for it to fulfill its promise. I want to will The Trickster into being a horror icon. If that can’t happen, I want him to show up in my home and hang out with me. One thing I’ve noticed over and over this October is how much I wish some of horror film scenarios happened in real life. I know that’s weird to say, but how cool would it be if you had to take a week off work because you’re dealing with a demonic leprechaun or you had to do library research an ancient curse wish box? Doesn’t that sound better than six work conference calls over Zoom on a Monday? 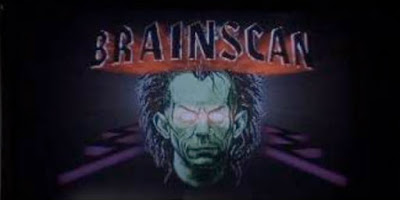 On this recent viewing of Brainscan I found more to enjoy than I usually do. One of those aspects was the character Kyle (played Jamie Marsh), who is the Furlong character’s horror and heavy metal loving best friend. Their friendship was endearing to me. They get off the phone with one another saying “Buddies forever?” It’s adorable. Kyle was cool because over the years I’ve met and seen so many guys like him at horror conventions or even interacting with you all here at F This Movie! He’s a massive fan of the macabre but also one of the nicest, most loyal, and well-adjusted people you could ever meet. Brainscan was the first credited screenplay by Andrew Kevin Walker (Se7en, 8mm, Sleepy Hollow) and he seems to get horror fans in the positive light they should be considered. The thesis of Brainscan (and its commentary on the genre) is interesting and kind of subversive. Despite being firmly a movie in the horror genre, it seems to at first posit that teenagers who love horror movies and read Fangoria are degenerates or violent outcasts and looking to the genre (or violent video games) as an affirmation of their desire for death and violence. But then (SPOILER) by the end of the movie we see that the Furlong character didn’t actually commit the murders and it was all a simulated part of the Brainscan video game. Once he comes out of the game, he feels immediate remorse for the actions he simulated. This is true of the vast majority of fans of the horror genre. They’re drawn to the darker elements in this type of art and can use the works to express that. Outside of the fantasy they abhor real violence or cruelty. They want to dabble but not get in too deep and ensure their hobby doesn’t actually hurt anyone. 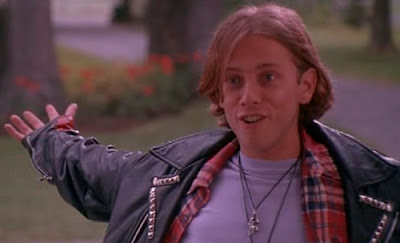 So, what is it about Brainscan? Besides being a movie that knows its audience and features an intriguing new horror star, it’s also a reminder of why horror is great in the first place. The genre is malleable: it can be fun, enlightening, comforting and terrifying, often all at once. It’s inclusive in a way that people who dismiss the genre never get to experience. A movie called Brainscan featuring a character named The Trickster wants nothing more than for everyone to press play and enjoy the ride.