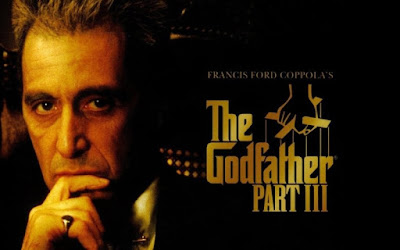 Earlier this year, a friend of mine announced on Facebook that she would be watching The Godfather trilogy for the first time. Naturally, she was flooded with comments along the lines of “you’ve never seen The Godfather?” and “wow, the first two are so good!” Along with these were firm warnings to “just watch the first two” and not to “even bother with Part III.” Well, I found myself getting surprisingly riled up by these kinds of comments. But, to be honest, they really didn’t come as much of a surprise. The Godfather, Part III has been maligned for three decades now by critics, audiences, episodes of The Sopranos, and on and on. But is it really the raging dumpster fire we’ve been conditioned to believe it is?

From the title of this article, you can probably already guess my answer. I have been defending the film since I first saw it. To be honest, on my first viewing as a teenager, I preferred it to Part II. My opinion has changed since high school, and I now feel it is the weakest of the three films. But even the weakest Godfather film is still a pretty damn good film.

Okay, just to get it out of the way, the movie has flaws. Some of them are pretty big. The movie suffers from the loss of Robert Duvall as Tom Hagen, who chose not to return. I love George Hamilton in certain roles and he’s good in the part he has, but he’s playing a traditional slimy lawyer and it just isn’t that interesting. Some elements of the plot, especially involving the Vatican bank, are an odd choice. Then there’s the biggest problem with the film—nepotism. Yep, we all know that Sofia Coppola got the part because her dad was the writer, director, and producer, but she also wasn’t the original choice to play Michael’s daughter Mary. Winona Ryder was up for the role but had to back out. The younger Coppola is just not that great of an actress, especially when compared to the likes of Al Pacino, Talia Shire, Diane Keaton, Eli Wallach, Joe Mantegna, and the one she most often shares the screen with, Andy Garcia. But hey, so her acting career didn’t work out—she turned out to be one hell of a director. 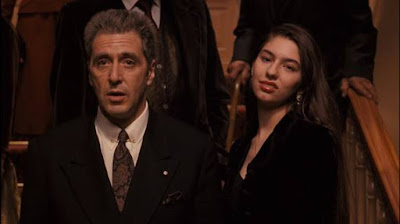 Now, on to the defense. There is plenty in this film that is deserving of the highest praise. The performance from Al Pacino is as strong as any entry in the series. We get some of our first tastes of “shouty Al” that would be on full display in Dick Tracy that same year and Scent of a Woman in 1992. The sometimes-problematic element of the Church brings about one of the best moments in the movie. While walking alone with one of the Cardinals, Michael finally confesses what has been eating away at his soul—that he murdered his own brother. He is truly seeking to leave his “life of sin,” but as he states in the film’s most memorable moment, “just when I thought I was out, they pull me back in.” Michael’s story is a tragedy of Shakespearian proportions. In the first film, he is a reluctant Hamlet. In the second, an ambitious and vengeful MacBeth. The Godfather, Part III is King Lear. It is about growing old, attempting—and failing—to reconcile, and, above all, it is a film about regret.

As Michael seeks redemption from his life of crime, Vinnie Mancini (Andy Garcia) is trying to rise to the top. Vinnie is the product of Sonny Corleone and his tryst with a bridesmaid at Connie’s wedding in the first film. He is a hothead just like Sonny and brings a great deal of fire and passion to the film. His competition with Joey Zasa (Joe Mantengna) leads to another of the great moments of the film. The helicopter attack on the meeting of bosses is as memorable as anything in the series. It is intense and harrowing with Coppola’s mastery of the medium on full display. It is certainly one of the best, if not the best action set piece in the entire trilogy. 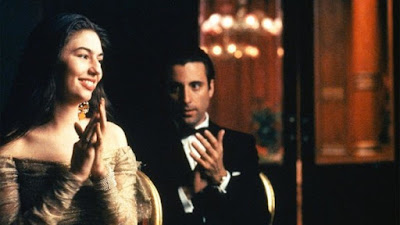 The true standout element of Part III is the character of Connie Corleone. Talia Shire’s performance in this film may be the best of her career. It is also an example of Francis Ford Coppola’s tendency toward nepotism (Shire is Coppola’s sister) paying off. The evolution of the character throughout the trilogy is fascinating. Though she starts as the wilting flower in The Godfather, by Part III she has become the puppet master of the famous logo—pulling the strings behind the scenes of the whole film. She is subtle but does not come across as evil. She merely wants what she feels is best for The Family. It turns out that she is much more her father’s daughter than she was ever given credit for. Like Vito (Marlon Brando in the original and Robert DeNiro in Part II), she is unflappable, quiet, but incredibly ambitious and supremely intelligent. She keeps her friends close and her enemies closer, to quote another famous line from the trilogy.

At its core, The Godfather Part III is a film about growing old. It is a film about feeling increasingly irrelevant in a world of forceful and talented young people coming of age. It has to be how Coppola was beginning to feel at that time. He had soared to the highest heights, been declared a genius, won multiple Oscars and the Palme d’Or. His films had been named among the greatest of all time by his peers and filmgoers. Even the massive potential disaster that was Apocalypse Now (1979) was declared a masterpiece and the greatest war film of all time. Then in the 1980s, his star began to fade. He saw his critical and financial cache decrease as the success of his protégés like George Lucas, Martin Scorsese, and Steven Spielberg skyrocketed. Perhaps he was feeling left in the dust. 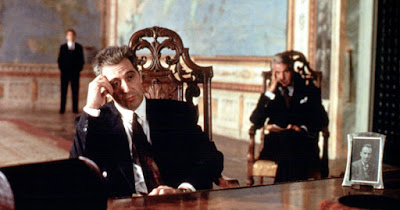 It is clear throughout the trilogy that Coppola relates most to the character of Michael. For this film, he seems to have poured all of that disappointment, all of that guilt over his youthful hubris, and all of his regrets into writing Michael’s downfall. Behind the scenes footage of Coppola directing Pacino in a crucial funeral scene shows a man who knows this character intimately. Perhaps because he feels he is this character in many ways.

Recently, Francis Ford Coppola announced that he would be releasing a new cut of the film titled Coda: The Death of Michael Corleone that he feels is more a more appropriate ending to the story. Though I have not yet seen that cut, I have read that it is not really all that different from the original theatrical version. Still, the fact that Coppola felt the need to recut the film after all these years seems to imply that the naysayers got to him. Part III may not be a masterpiece, but so few films are. The final product is a flawed, but earnest and deeply personal film that deserves credit for what it is rather than what some hoped it would be. With it being the third part of a trilogy, comparison to the first two, which rightly are called masterpieces, is natural. Still, every movie deserves to be taken on its own terms. I hold out hope that, eventually, The Godfather, Part III will be.
Posted by Patrick Bromley at 12:00 PM