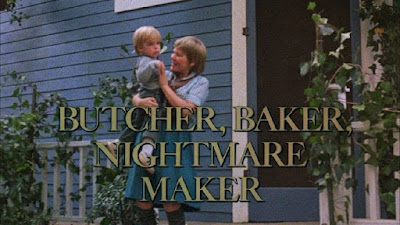 More of a love letter to Susan Tyrrell.
Disclaimer: I know this was originally released in a few Oregon theaters in 1981. “Then why write about it in a column dedicated to 1982?” The answer is twofold: 1.) It expanded to more theaters in 1982, and Letterboxd has it listed as 1982. 2.) It's currently streaming in pristine quality on Shudder, and I wanted to make sure people checked it out.

William Asher's Butcher Baker Nightmare Maker, re-released in 1983 under the far inferior title Night Warning, opens with a young couple rushing to their station wagon, cheerily waving goodbye to their three-year-old son who's in hysterics and grasping for his parents while his aunt feigns soothing tones, “helping” him wave goodbye. The excited couple is off for a child-free weekend to do what couples do on child-free weekends (wink), and as they pull away, BOOM! Freeze frame on the aunt with a menacing smirk and pure evil seeping from her eyes. We know where this is going. By and by, the breaks go out on the wagon, and as the couple goes careening down an Arizona switchback they meet their untimely death a la Final Destination 2 logging truck scene, topped off with an exploding car. We saw it coming. 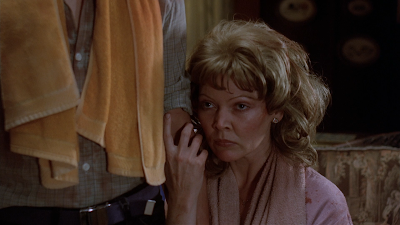 That sequence wasn't even directed by Asher. Michael Miller was the person calling the shots with none other than Jan de Bont behind the camera. Nevertheless, we're set up for an entertaining ride that sometimes feels like we're careening down an Arizona switchback towards a logging truck. It's 14 years later and we see Susan Tyrrell in a bathrobe entering the bedroom of a sleeping Jimmy McNichol. Tyrrell is Aunt Cheryl, guardian to the since-orphaned Billy played by McNichol (who, by the way, looks so much like his sister it's almost distracting). Cheryl sits next to the sleeping teenager AND STARTS PURRING IN HIS EAR! The gruesome death of the young couple at the beginning set me up for something else entirely. That something else didn't include hints of incest. That's okay because it's Susan Tyrrell, and Susan Tyrrell is Queen Shit (or Queen Doris, if you will) in my book.

I probably first saw Tyrrell as Midge Montana in Big Top Pee-Wee. Whatever she's in and whatever she's doing has and will always stick with me. Whether she's playing crazy and burned out in Andy Warhol's Bad or drunk and loose in Flesh + Blood, she will always be my favorite part of a movie. In Butcher Baker, Tyrrell plays Cheryl as if her character from Bad ditched her loser husband, threw the baby in the trash, moved across the country, had some adult fun along the way, and changed her identity. She's a little bit Louise Lasser in Blood Rage, a little bit Kathy Bates in Misery, and a little bit Piper Laurie in Carrie. But just as she was in everything, Susan Tyrrell was sexy. In a crazy way. Like you know you would have the most unforgettable night with her and she would absolutely ruin your life... But it'd be worth it. Cheryl is Norman Bates crazy, loves to pickle things, and always wears a bandana around her head (swoon). A religious zealot with the scariest painting of the Shroud of Turin hanging in her hallway, maybe she's into a little incest, too.

After Cheryl's advances are rejected by a TV repairman, she stabs him multiple times. Billy arrives just in time to witness the murder, getting wrapped up in his crazy aunt's web of lies after she smears blood all over his face and clothes. Bo Svenson enters with his shirt unbuttoned down to his sternum as the most homophobic cop to ever curse the screen. After threatening to out a gay character, Carlson smugly says, “I suggest you resign. Otherwise you might get yourself lynched.” Aunt Cheryl claims rape but Det. Carlson doesn't buy it. He thinks Billy and the repairman had a lover's quarrel and Billy snapped. Now people think Billy's gay – Det. Carlson, the school bully played by Bill Paxton, and possibly his girlfriend played by Julia Duffy – and having an affair with his high school basketball coach.

While his character is an absolute monster, Svenson is almost as great as Tyrrell here. He's got a swagger about him that screams “Cool!” but when he speaks he cuts deep with his hate. McNichol is your typical pretty boy high school senior oblivious to anything that doesn't immediately concern him... until it concerns him. Violently. Britt Leach (Weird Science, The Great Outdoors) plays Carlson's partner, who tends to be on the side of the victims and dons a Col. Sanders-style bowtie. When he enters Cheryl's house without permission, she bursts into the kitchen with a crowbar and slams it down on the counter over and over screaming, “Get out!” In a similar scene, Cheryl crashes through a door, wearing a housedress and looking like Refrigerator Perry. She growls, “What are you doing here!” Throughout the movie Tyrrell uses what seems like an eight-octave register to show us how insane Cheryl really is. 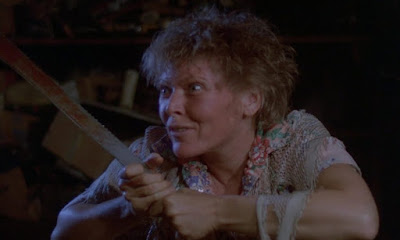 There is no doubt this is the Susan Tyrrell show, but everybody matches her energy, and gives 110%. From the use of a meat tenderizer and saying the line, “I'm your girlfriend now,” to purring and full-on face-sucking, Susan Tyrrell proves that she was one of the most powerful people to show up in movies or television. And we're all better, smarter people because of it.
Posted by Patrick Bromley at 5:00 AM