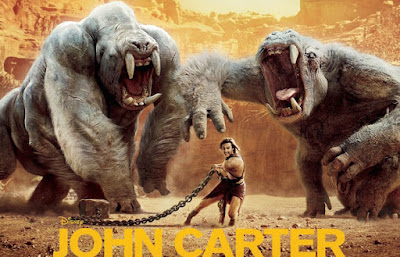 Rob: Our series on notorious box office bombs continues with 2012’s John Carter, easily the biggest money-loser we’re likely to cover. The first live-action effort from PIXAR legend Andrew Stanton, it’s an adaptation of Edgar Rice Burroughs’ A Princess of Mars (1912), finally brought to the screen after more than eighty years in development. Though it was expected to kick off a franchise based on Burroughs’ eleven-part Barsoom series, its staggering cost and box office failure led to the resignation of Disney head Rich Ross and put an indefinite hold on any sequels.

Plot-wise, we’re looking at an old school space opera: John Carter (Taylor Kitsch) is a former Confederate Army captain whose discovery of a mysterious medallion inadvertently sends him to Mars (called “Barsoom'' by the locals) and finds him caught in the middle of yet another civil war. The godlike Therns — who have been manipulating universal events for millennia — have given a powerful weapon to Sab Than (Dominic West), ruler of the warlike city of Zodanga. Than seeks to solidify his planetary rule by marrying Helium’s Princess Deja Thoris (Lynn Collins) and threatens to destroy all who stand in his way if she refuses. Carter — whose human biology gives him supernatural powers on Mars — soon becomes leader of the four-armed Tharks and seeks out ancient magic to aid his return to Earth. After falling for Deja Thoris, however, Carter agrees to join forces with Helium to destroy Sab Than and bring peace to Barsoom.

Adam: Thank you for not making me write the plot synopsis. 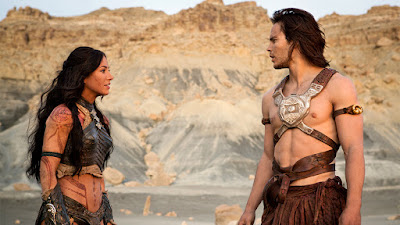 Rob: It’s my penance for the Bloodrayne column. Anyway. So John Carter is Dune before Dune. It’s Buck Rogers before Buck Rogers. It’s a big, convoluted action epic written a century ago for adolescents captivated by the wonders of telegraphs and astronomy. Its earnest tone, however, was completely out of vogue to a modern audience only two months away from seeing The Avengers. It’s got no snark. No tongue-in-cheek commentary. It’s a swashbuckling adventure yarn played completely straight. When we consider the box office fates of similar throwbacks like Cutthroat Island, Jupiter Ascending, and Speed Racer, John Carter’s failure feels significantly more predictable. Combined with its immense pricetag — the animation-oriented Stanton struggled with live-action production and allegedly re-shot the entire movie at least twice, which was well-reported in the media — it’s a recipe for financial disaster.

Is it a bad movie, though? Not if you have the stomach to deal with Therns and Tharks and all other manner of overstuffed worldbuilding (which I do). Other than that, it’s as classic an adventure story as they come. It’s capital-F Fine. Most of the cast — further including Bryan Cranston, Willem Dafoe, Mark Strong, Samantha Morton, and James Purefoy — seems to be buying in, and Dan Mindel’s well-crafted cinematography prevents the whole affair from turning into greenscreen goop. The only issue is Taylor Kitsch, whose inability to project even the slightest bit of charisma becomes a real problem in a role that is essentially Space Indiana Jones. Is that enough to sink the whole thing? It might be.

Adam, what did you think of John Carter?

Adam: This was my first viewing of John Carter, a movie which I most closely identify with Patrick (and I believe JB too) defending over the years. I didn’t see it in 2012 because it looked similar to Prince of Persia: The Sands of Time, which was a movie I was excited about and ended up walking out of midway through. John Carter is certainly better, but I think I’m more in the “it’s alright” camp than a fan. After a strong first 20 minutes on Earth (because of Bryan Cranston and a funny ongoing editing joke), I was pretty disengaged with all the developments on Mars (there’s a lot of jargon) until the arena battle sequence about 90 minutes into the movie. After that point, I was starting to get more and more onboard with the film and would have liked to have seen another entry if a sequel had happened. 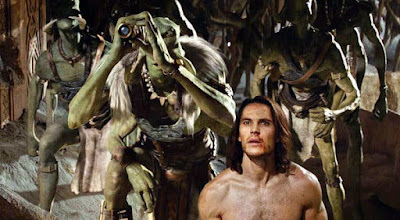 Rob: I read a bit about how the movie combines elements of the first three novels, which isn’t uncommon for the genre, but I’m wondering if streamlining the lore and saving some depth for the sequels might have helped the movie play a little more smoothly.

Adam: I agree with you that Taylor Kitsch’s performance limits the movie. He’s sincere and certainly physically fit for the action-heavy part, but there’s little personality to his take on John Carter other than huffing and puffing. I don’t hate Kitsch as an actor (he’s been good in movies like Savages and 21 Bridges) but he works better for me as a villain or anti-hero as opposed to the protagonist we’re supposed to root for.

Rob: It’s such an intangible thing. If a computer was collating the physical qualities shared between leading men like Harrison Ford, Burt Reynolds, Kevin Costner, etc., and trying to synthesize a repeatable model, Taylor Kitsch would be among the results. But he just doesn’t have It. No one knows what It is, but he doesn’t have It.

Adam: It’s unfortunate that John Carter is so late to its own game where the work that was influenced by this book series has staked all the claims. I was reminded a lot of Avatar during the film, both story-wise and visually (primarily the aliens and flying apparatuses) and John Carter suffers for me by comparison, especially in the beauty of the world I’m looking at. Of course, Mars has to look like Mars, but it’s also not the most photogenic setting for a 2-hour plus movie.

Rob: It’s MUCH older than so many of the franchises that drew inspiration from it, and yet it continues to avoid popular notoriety even after this movie’s release. That was apparently a source of contention between Stanton and Disney: He went overboard on the movie because he thought the name recognition was as baked-in for everyone else as it was for him. It is not! It’s like telling people that Aquaman is just DC’s ripoff of Prince Namor -- That may be true, but no one knows who Namor is, so what does it matter?

Adam: John Carter falls into the same camp for me as many big-budget Disney Live Action Adventure films that became part of the studio’s stock & trade post Pirates of the Caribbean. Many of them (including Hidalgo, Around the World in 80 Days, National Treasure: Book of Secrets, The Chronicles of Narnia: Prince Caspian, Prince of Persia: The Sands of Time, The Sorcerer’s Apprentice and Tron: Legacy) just sort of blend together for me despite their amazing production values. Do you think if they got a big, charismatic movie star to headline John Carter (let’s say Leonardo DiCaprio) it would have made a difference or was this a doomed project from the start?

Rob: I want to say yes, but is John Carter -- the person -- enough of a character for a DiCaprio or Downey Jr. to really get their arms around and make into something? Then again, Indiana Jones isn’t a character, either; He’s just a series of reactions to circumstances that Ford made unforgettable through sheer force of personality. It could have gone either way, but I’m going to say that this one was doomed from the start. It’s just too elemental a story for modern audiences to connect with. The chances of John Carter working as a major motion picture franchise died long before either of us was born. But hey, Netflix could work it into a series that everyone’s dad will love and no one else would ever hear about. Or maybe TNT? They know drama!

Can we talk really quickly about how Disney rejected the novel’s title A Princess of Mars AND the Stanton’s original title John Carter of Mars in favor of just John Carter? How much do you think bad marketing played a role in this one’s failure?

Adam: You can mainstream-up something this old-fashioned and niche only so much. Keeping the title John Carter of Mars would have helped giving audiences a better idea of what the film is all about, but I’m not sure it would have made much of a difference for it financially. Just my gut impression, but Mars in a movie probably puts off just as many people as it attracts. I blame Mark Strong. If you want a hit, you don’t cast Mark Strong.

Rob: You heard it here, folks. Adam hates Mark Strong. We’ll be back next week with the next entry in our Hundos series: 1988’s Dead Ringers, directed by David Cronenberg. Until next time…