Reserved Seating Presents The Rest of the Furious: BLOODRAYNE 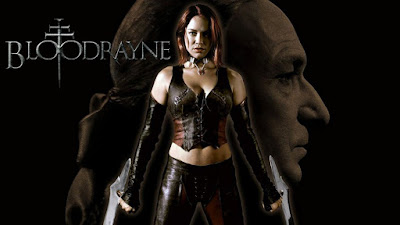 The review duo who once led a society of 18th century vampire hunters.

Adam: Our series revisiting the non-F&F work of Fast and the Furious cast members drives another quarter mile and stops for Uwe Boll’s 2006 medieval vampire actioner, BloodRayne. Co-starring Michelle Rodriguez and a bevy of overqualified peers including Kristanna Loken, Michael Madsen, Matthew Davis (Blue Crush reunion!), Will Sanderson, Geraldine Chaplin, Udo Kier, Meat Loaf Aday, Michael Pare, Billy Zane, and Ben Kingsley, BloodRayne (which was based on a video game) tells the story of Rayne (Loken), a “Dhampir” who Amazon Prime Video describes as part human, part vampire, all woman. Rayne seeks revenge against an evil head vampire named Kagen (Kingsley), who killed Rayne’s mother when she was a child. On her quest, Rayne forms an alliance with a society of vampire hunters called Brimstone, led by Madsen, Davis, and Rodriguez. 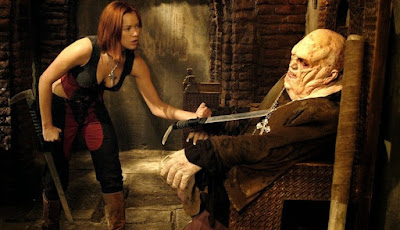 In late 2005 I saw the BloodRayne trailer and, being a sucker for poorly produced medieval fantasy, thought it looked like the best SyFy Channel movie ever made. I ended up seeing the movie in January 2006 at the dollar theater near me (it went from first-run to second-run in about 3 weeks, which only made me more excited for it) and had a blast chuckling at its weirdness in a theater of myself and about 10 other people. I wouldn’t say I was an Uwe Boll defender back in the day (House of the Dead and Alone in the Dark are really bad), but his films piqued my interest primarily because of their casts. Everybody is so miscast that it takes on a bizarre fascination. I love that Michelle Rodriguez and Michael Madsen are playing Russians. I love that Michelle Rodriguez is wearing a purple coat in one scene that looks like she bought it at the mall while everyone else is in period-appropriate attire. I love that all the women are baring midriff in the 18th century. I love Michael Pare’s cameo as the Brimstone Society’s Q. I love that Billy Zane says “Please stop throwing things at me” after Will Sanderson separately throws a decapitated head and a scroll of parchment at him. I love that Michael Madsen is just fiddling around with his sword throughout the entire movie. I’m serious. He looks like he’s having the time of his life finally playing a character that has a sword. BloodRayne is not a great movie (or a good Michelle Rodriguez movie -- she doesn’t seem to be enjoying herself as much as in her later career work), but it’s certainly fun in a so-bad-it’s-good way. It’s like if Renny Harlin directed Verotika.

What did you think of BloodRayne, Rob?

Rob: In general, I think it’s very difficult to defend Uwe Boll. He’s a thoroughly incompetent filmmaker and seems like an incredibly unpleasant person. There was a point in the early 2000s when I could at least appreciate his chaotic personality (and especially to his criticisms of film culture’s various hypocrisies), but his brand of mindless trolling is a lot less funny now that we’ve seen the real damage it can do. I’m glad BloodRayne was on Amazon Prime because I would absolutely not have paid to rent it. With all that said, I can grant you that it’s one of his better movies. A majority of the scenes seemed to flow in chronological order, and I had a general understanding of where the characters were and what they were doing in a given moment. Only some of the actors looked like they were being held on set at gunpoint. The production design looked like it came from one of the better episodes of Xena: Warrior Princess. I thought Billy Zane was kind of good. That’s really all I’ve got in terms of positives. 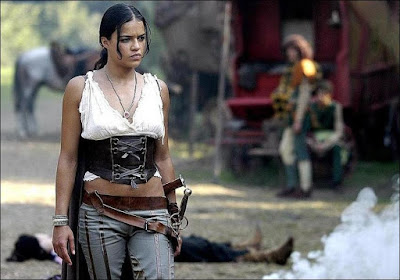 And, look. I haven’t played the BloodRayne games, but I hope it’s clear by now that I don’t look down on video game movies the way a lot of people do. The assumption that video game movies are inherently bad — or that “good for a video game movie” is legitimate conditional praise — has always bothered me. I’ve already praised Silent Hill to an unsettling degree, written about my sincere love of the Resident Evil games (which share very little with Paul W. S. Anderson’s films), and now that the Oscars are over, I can confess that I found The Last of Us Part II to be the single best piece of media released in 2020. Video games aren’t mindless. Many of them have legitimately great storylines and push the line between passive and active entertainment in ways that movies never will. I honestly think that some games — just like some great novels — are unfilmable, that the experience of controlling the character through the drama is essential to the drama’s power.

I also think I can speak for both of us when I say Michelle Rodriguez rules.

Rob: It sucks that she was pigeonholed as an “action girl” early in her career, which probably forced her into roles that were way beneath her, but she’s such a pro that watching her in BloodRayne eventually became a little upsetting. I mean, what if she didn’t have Fast & Furious to keep her afloat? Madsen and Kingsley are having fun throwing all this bullshit around, sure, but there’s very little at stake for them. Look at Kristanna Lokken: She’s a Terminator in 2003, a video game hero in 2005, and then what? And I mean no offense to the actress; I’m pointing out the inequalities in the system and how easily doing something like BloodRayne can sink careers before they’ve started. I know I’m bringing things down instead of having fun at goofy-ass BloodRayne’s expense, but something about it triggered an insane amount of empathy that I haven’t been able to overcome.

Ok, let me get back on track. This is the first film we’ve covered in this series in which our star is a supporting character. Would BloodRayne have been better with Rodriguez in the lead? I think so. 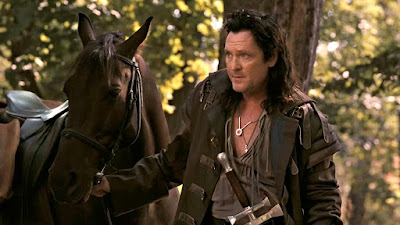 Adam: I’m gonna say no in this case because Michelle Rodriguez seems unhappy throughout the movie. At this point in their careers, Loken has a lighter presence on screen and I think her as the lead fits the tone of BloodRayne better.

I understand where you’re coming from even if I don’t feel the same way. I don’t think BloodRayne sabotaged anyone’s career and Loken doesn’t seem embarrassed by it from what I can tell (I met her at a convention once, which is the only reason I say that). We can wrap this one early since we’re coming at it from such different perspectives and I think we both expressed our opinions well. Like religion and politics, BloodRayne isn’t fun to argue about. Me doubling down on my praise (if you can call it that) will seem like I’m not empathizing with your sincere arguments.

Rob: Sorry to be the bummer, everyone!

Adam: It’s all good. Nothing to apologize over. We’ll be back next with our Box Office Bombs series and a first-time watch for each of us: John Carter. I’m looking forward to it! Until next time…