Movies Is Good: What Month Is It? 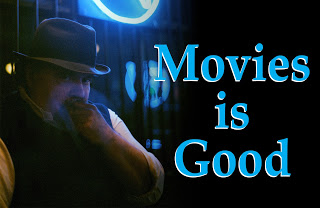 The pernicious pandemic persisted, and our petty perceptions of time putrefied...

Now that the worst of COVID-19 in America seems to be over, now that more people are getting vaccinated, now that we are all getting back to normal, and now that the weather is getting warmer, I find myself wondering why all the stores aren’t putting all their Halloween stuff out for sale yet. My sense of time is that damaged. If you, like me, wonder why we are not celebrating Halloween in three weeks, here’s some things you can do. 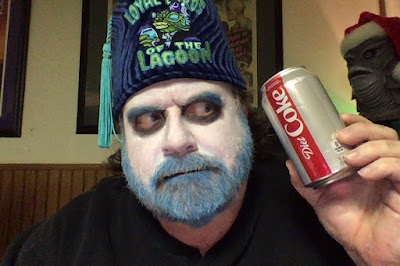 PRETEND IT’S HALLOWEEN: Fun-sized candy bars are sold year-round. Buy some and persuade your significant other to hand you a couple whenever you do another complete circuit around the house and approach with a hardy “Trick or Treat!” I bet many of my readers have a gaggle of costumes somewhere. PUT ONE ON! Wear a costume when you watch The Last Drive-In on Friday nights and/or Svengoolie on Saturday nights. Do not go outside in costume. Your neighbors will call the police. 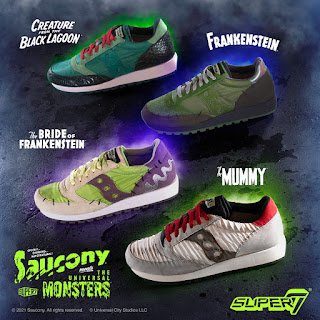 BUY SOME MONSTER SHOES: The fine folks at Super 7 are once again teaming up with Saucony athletic shoes and releasing officially licensed Universal Monsters sneakers THIS FRIDAY. Their previous release of Dracula, the Metaluna Mutant from This Island Earth, the Wolfman, and Frankenstein shoes took place during San Diego Comic-Con in 2018 and was limited to stock sold in their pop-up store at the convention. Friday’s release of Frankenstein, the Bride of Frankenstein, the Creature from the Black Lagoon, and The Mummy shoes is wider, and shoes can be ordered online. Good luck. (The Bride shoes glow in the dark!) 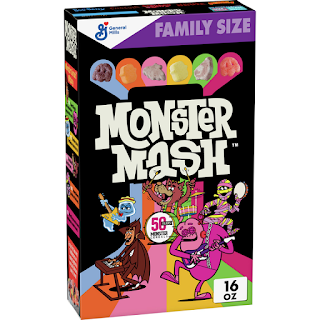 GET READY FOR BREAKFAST: This fall, to celebrate the 50th anniversary of their monster cereals, General Mills will be offering something called Monster Mash for the very first time. The cereal itself seems to be an amalgam of Boo-Berry and Fruit Brute, but the real selling point here are the four (4) different types of marshmallows in the mix: a yellow ghost, an orange ghost, a chocolate bat, and what looks like a hunk of well-done steak. I have no idea how this will all taste. Some wags on the Twitter machine are already taking General Mills to task for fabricating the cereal portion from “corn,” instead of the clearly superior and tastier “oats.” All I know is that with this many marshmallows in the mix, my readers are going to need to spend the next several months “working their way up to” what is essentially eating your body weight in sugar every morning in October. Start small. 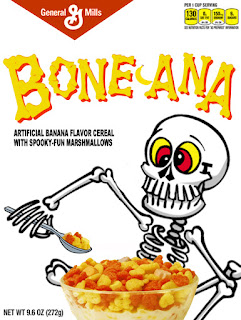 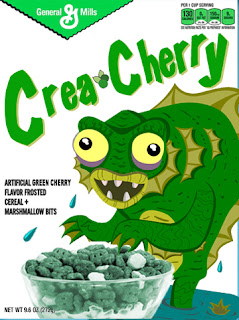 ANNOYING AUTOBIOGRAPHICAL PAUSE: Many years ago, my wife and I had some fun on the Facebook machine by inventing a crazy history of the General Mills monster cereals. We fantasized that the enormous success of Count Chocula, Frankenberry, Boo-Berry, Yummy Mummy, and Fruit Brute caused General Mills to introduce many more of these novelty cereals, all of which were quickly pulled from store shelves for various reasons. My wife is quite skilled on the Photoshop machine, and her fantasy cereal boxes really helped to sell the illusion. There was Bride of Frankenberry, which failed because boys could not be persuaded to buy a “girl” cereal.

There was Bone-Ana, which was discontinued because the yellow dye permanently stained children’s teeth. There was Crea-Cherry from the Cereal Lagoon, which not only turned the milk green, it curdled it. Fun. Based on the comments we received, we were a little too successful at this game. Many friends and family members thought the history we were talking about was real. We were finally busted when we used an all-too-familiar graphic from a popular phone game app to illustrate Zom-Bee Crunch, which of course was hurriedly taken off the market when a miscommunication between General Mills and their Chinese co-packer resulted in cereal boxes full of live, buzzing bees instead of honey-flavored cereal. 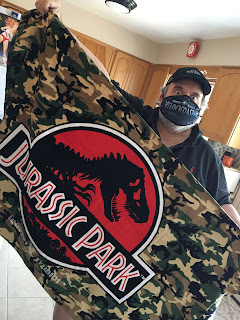 RIDE A ROLLERCOASTER: Universal Studios Orlando is poised to officially open its new Jurassic Park Veloci-Coaster on June 11th. It’s in “technical rehearsals” now, so you may get to ride it, you might not. Enterprising coaster enthusiasts have already posted video from a front-row seat on the YouTube machine. This makes me wish that all theme parks would engineer rides that a man of my girth could comfortably fit on. It has long been my theory that the ride vehicle is always tiny on purpose, to discourage big guys from 1) falling off the ride or 2) having a heart attack during the ride. Oh well, a substantial man can dream. Look here, courtesy of the also fine folks behind Chasing Dreams with Mike:  How many dinosaurs did you count? That last big drop’s a doozy, isn’t it? I love the little whimpering noises the videographer makes. 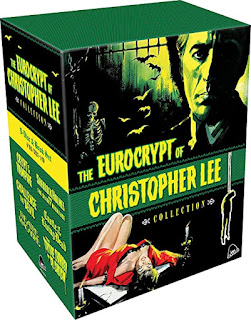 BUY SOME MOVIES: Last week, Shout Factory released a spiffy new Blu-ray of the 1976 Dino De Laurentiis King Kong. Today, Shout Factory releases Eyes of a Stranger and He Knows You’re Alone; Severin releases Day of the Animals (in which you can witness a bare-chested Leslie Nielsen fight a bear-chested grizzly) and, for more fun, perennial ursine favorite Grizzly, starring Christopher George, the Human Cigarette. Next Tuesday, JJ Abrams’ paean to the films of Steven Spielberg, Super 8, arrives on 4K Blu-ray, along with Hitchcock’s Psycho and The Birds, free at last from the tyranny of their original, expensive 4K boxset. Paramount is also re-releasing the seminal Don’t Look Now and Rosemary’s Baby on Blu-ray for more creeps and lack of sleeps.

If Severin’s recent Dungeon of Andy Milligan boxset is any indication, its Euro-Crypt of Christopher Lee collection should be another home run. It too is being released on May 25th. Monkey Punch Lizard is being released on 4K Blu-ray on June 15. Arrow is releasing Dario Argento’s crazy good The Bird with the Crystal Plumage on 4K Blu-ray disc in a fun little box set on June 29th. Taken together with any five films from the Milligan boxset, that’s a total of 24 films that will keep you busy... at the rate of one a week... until... Halloween! You’re welcome.

Let’s face it, dear readers. Halloween is a state of mind. Save me a fun-sized Snickers? 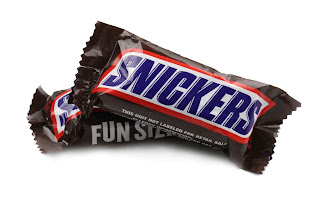