Although I bow to Patrick’s Bromley’s superior skill at putting these marathons together, I thought it would be fun to program a little at-home Zombie Fest. Because I am the only one on the site who is retired, I resisted making it a full 60-hour, 30-film extrava-deadza. After two and a half days of these films, my readers would REALLY know how it feels to be a zombie.

Send the kids to grandma’s house! Silence your cellphone! You’re going to want to minimize distractions... to stay alive! Pop some corn! Dim the lights! Load your shotgun! Didn’t Uncle Ned pass away three years ago? What’s he doing in the corner? 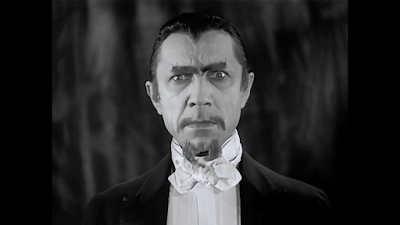 This is the film that inspired George Romero’s remark that “zombies are the blue-collar monsters.” I agree that they’re the most working class of all the monsters—this film involves rich people enslaving the hoi polloi so they toil away for less than minimum wage. White Zombie is wonderful and very short; it is the perfect appetizer to the sumptuous meal of human flesh upon which we are about to dine. This film stars Bela Lugosi. You can spot sets and furniture from previous Universal horror films because the low-budget producers had no studio of their own and rented everything from Universal Studios. This film gave Rob Zombie a name for his famous band. Enough said?

Time for a little Saturday morning cartoon action before things get all undeadly serious around here. I know this was not part of the original series; I know this is one of innumerable resuscitations released every couple of years. I know that Billy West voices Shaggy, instead of America’s Top Forty voice icon Casey Kasem. But this little made-for -TV gem is super fun, and also features Mark Hamill and Adrienne Barbeau in the voice cast. Those with sentimental affection for the original series can take solace in the fact that original cast member Frank Welker does indeed voice Fred. (Good God, the man has more than 850 film and TV voice-over credits!) This direct-to-video movie really divides Scooby fans; some love it, citing the bigger budget and genuine scares; and some hate it because it’s a little scary for small children and (SPOILER ALERT) the bad guy doesn’t turn out to be some asshole in a rubber mask. This is a zombie marathon, you know. 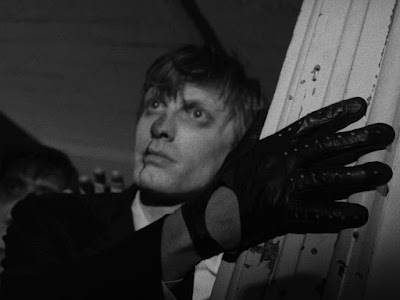 The original and still champion, NotLD is the reason we are sitting in our screening room today. It’s one of the five most important horror films ever made. You can read about it here. BTW: My original column on NotLD contains a link to the essay “Monster Fan 2000,” which, as a member of the F This Movie! community, you are required to read. The link is still live, unlike most of the characters in this film.

From the sublime to the ridiculous, Edgar Wright’s crazy zombie film shows what a satisfying film you end up with when the filmmakers have honest love and affection for its subject matter. Simon Pegg and Nick Frost have never been better. Some genuine tug-at-the-heart-strings moments. Great use of the Queen songs “Don’t Stop Me Now” and “You’re My Best Friend” (as well as perennial favorite “Ghost Town” by the Specials). In a genre that often has a problem with endings, this film really sticks the landing. “You have red on you.”

From the ridiculous to the under-rated, I felt like the only living person who actually liked this big budget flop when it was first released in 2013. I was a fan of the Max Brooks novel on which it is based. I liked Brad Pitt’s performance. I liked the special effects, which depicted the zombie horde as a plague of flesh-hungry locusts. I agree the film feels like two very different films stuck together at the midpoint; I’m guessing that co-writer Damon Lindelof had something to do with THAT. I’m also guessing that you, dear reader, have not seen it. Use this marathon as a chance to MAKE UP YOUR OWN MIND! Insist on the unrated cut; it’s the superior version.

Trust our man Wes Craven to make one of the most unsettling and scary zombie films ever. I can still remember how unnerved I was when I first saw this film on opening night 23 years ago... There is an extended sequence with Bill Pullman in a coffin that I still can’t shake. Do you think voodoo is keen? Do you like your zombies Haitian, just like the original White Zombie? This is the film for you. 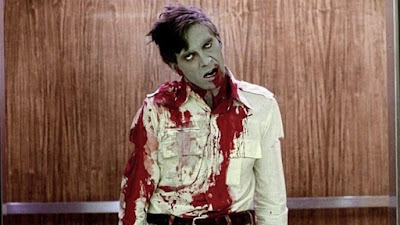 My God, this is simply one of the greatest horror films of all time and one of the most ambitious. It is at once a worthy sequel to the original film; a scathing critique of (among other things) consumer culture and class warfare; a primer on then-new gore and make-up effects; a model of a low-budget exploitation film; a director’s showcase; and, as if that wasn’t enough, a film with both a sly sense of humor and a heart-breaking mood of tragedy. There aren’t enough films this good.

NOTE: If you’re able, spin the new Second Sight 4K Blu-ray or standard Blu-ray restoration. They are gorgeous. You get to choose which of the various edits you want to watch; unlike Roger, who does not get to choose whether or not he comes back.

After a disturbing and thought-provoking masterpiece, we take a break of sorts with this piece of government-issue cheese. A lot of fun if you’re in the right mood, this weird amalgam of zombie flick and buddy cop movie is all over the place. Treat Williams sells the shit out of the film’s dubious premise; partner Joe Piscopo is surprisingly inoffensive. I will admit that I programmed this particular film into this particular time slot knowing that some of my readers will sleep through it. Nighty night. 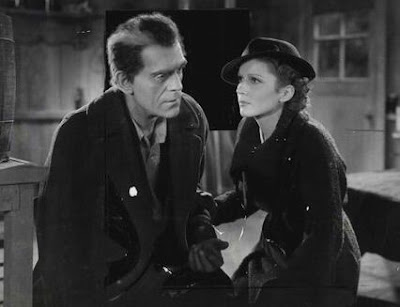 No, not the TV show. Instead, how would you like to see Santa Claus (Edmund Gwenn) revive Frankenstein’s Monster (Boris Karloff) so he can take revenge on a bunch of gangsters? I thought so.

A terrific, atmospheric film and a great example of the Val Lewton “less is more” school of horror filmmaking. When we talk of Lewton’s RKO films, the discussion tends to focus on Cat People, Curse of the Cat People, and The Body Snatcher; I wish IWwaZ got a little more love. I still remember the first time I saw it—at a Lewton retrospective at the happiest place on Earth, Chicago’s Music Box Theater. The “walk through the cane fields” sequence can still give me chills. The plot here is clever and contains some nice twists and turns. Some critics have pointed out that this film seems, at times, to be an unofficial remake of Charlotte Bronte’s Jane Eyre, only with more zombies.

Back in 2019, I wrote, “Let me tell you, this is one of this year’s MUST WATCH horror films. The plot is simple: a film crew makes a zombie movie in an abandoned warehouse and is beset by real zombies. OR ARE THEY? Seemingly a one-extended-take, shot-on-video quickie from Japan, the film proceeds to open like a puzzle box, revealing layer after layer of the mayhem inherent in its creation.

“The small details here are so well observed that it becomes a remake of François Truffaut’s Day for Night, only with more zombies. One Cut of the Dead is so endlessly clever and has so much to say about any creative endeavor, it just knocked me on my intellectual ass. Be sure to stay through the credits to discover just how complicated the production actually was. ‘So… do you have any hobbies?’” 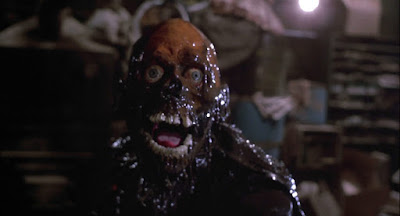 This outstanding comedy has a unique premise: the events of the original Night of the Living Dead film were not fiction—they really happened. The zombie outbreak was quelled by the government, which stuffed all the dead zombies into metal canisters, sent them to a huge storage facility, and hushed up the whole thing. Intrigued? I knew you would be. James Karen gives one of the greatest performances in horror film history, playing a guy who is REALLY SCARED. You know a film has captured a unique comic spirit when one of the funniest lines of dialogue in the whole picture is “Send more police!” 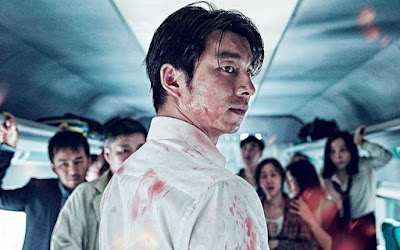 I was late to this amazing take on zombies, having caught it just a few weeks ago during Joe Bob’s The Last Drive-In on the Shudder machine. George Romero would be proud. This film checks all the boxes: trenchant social commentary, unique zombie design and execution (sorry), amazing suspense and action set pieces, great performances by the entire cast, seamless special effects, a wicked sense of humor... and a heart. (I know this film has a heart. The director keeps it in a jar on his desk.) SPOILER ALERT: The end of this film is touching, sweet, and life affirming—just the thing to end our marathon, send us scurrying up the basement steps into the light of day, and straight to the bathroom!

Email ThisBlogThis!Share to TwitterShare to FacebookShare to Pinterest
Labels: dawn of the dead, movie marathon, movies is good, night of the living dead, shaun of the dead, train to busan, white zombie, zombie movies