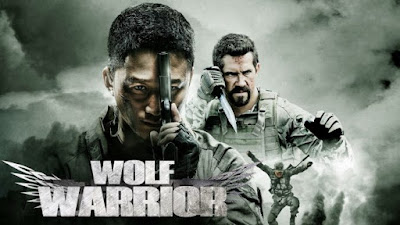 The review duo who are no match for a pack of CGI wolves.

Adam: This week is a special Junesploitation edition of Reserved Seating as we review 2015’s Wolf Warrior in honor of Mr. Scott Adkins. Wolf Warrior is a Chinese action-war film that launched a massively successful franchise. In fact, Wolf Warrior 2 went on to become the highest grossing film of all time in China. The original tells the story of Leng Feng (played by Jing Wu, who also directed the film), an expert marksman who is recruited by a special forces unit called the Wolf Warriors. Feng and his unit are being hunted by a group of elite mercenaries (led by Scott Adkins) who have been hired by a drug lord to exact revenge on Leng Feng after he killed the drug lord’s brother.

Scott Adkins has a prominent role in Wolf Warrior (he’s the main action bad guy, while the drug lord character is more the businessman villain), but this is Jing Wu’s show all the way and he’s a very likable and exciting action star. Also co-starring in the film is Yu Nan (of The Expendables 2 fame, making this a reunion for her and Adkins despite not sharing any scenes), who plays Leng Feng’s superior officer. The fight sequences are frenetic and well-choreographed, making Wolf Warrior an exciting, brisk 90-minute watch. I went in expecting an Assassination Games or Universal Soldier: Day of Reckoning type of Scott Adkins movie, but this reminded me much more of Bruce Willis’s Air Strike, which we reviewed a couple years ago. Don’t get me wrong, Wolf Warrior is much better than Air Strike, but it shares the same pro-war jingoism and 3D-friendly “special” visual effects. What I found most interesting about Wolf Warrior is that it’s an example of the films dominating the Chinese box office, which in turn influence Hollywood blockbusters chasing global box office glory largely in China. I’ve taken Hollywood movies to task (such as Independence Day: Resurgence and Skyscraper to name a couple of examples) for bending to the will of the global box office because it sands off all the edges of their product to make it as generic as possible to serve any audience. It was interesting seeing it from the other side of the fence with a Chinese blockbuster and informs why many Hollywood films look the way they do now.

What did you think of Wolf Warrior? 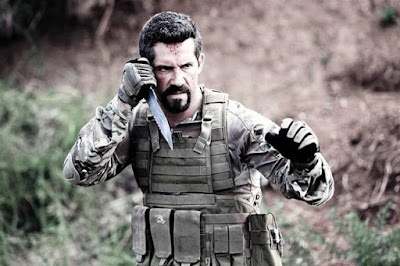 Rob: At first, I was a bit disappointed with how little Scott Adkins is really in Wolf Warrior, but I had a lot of fun once I let go of that. As you said, it’s super jingoistic (one scene finds all the troops putting on “I Fight for China” patches while patriotic music plays behind a rousing speech about honor and vengeance), but there’s a lot of humor and charm to be found between the explosions and intrigue. Jing Wu has that old-school action swagger — he’s an expert sniper, a rabble-rousing little stinker, and a ladies’ man. He’s Rambo with a dash of Han Solo. I like him a lot. Amazon Prime translation issues aside, Wolf Warrior also features some really fun dialogue and more than a few physical comedy gags. I loved the bit where Feng successfully avoids getting blown up by a land mine and then, over the comms and in front of everyone, asks the officer he’s been flirting with if she has a boyfriend. I just kept waiting for him to wink at the camera and run out of frame to zany music.

Adam: That was such a weird, but charming beat. It was like 1940s Hollywood producers barged in and were all “But does he get the girl? Our hero needs to get the girl!”

Rob: Two things we need to talk about: There’s a scene in which the Wolf Warriors are pinned down by a sniper. He takes out several troops and critically injures the commander, who lays helplessly far from his backup while getting pummeled with random sniper fire. The leg. The arm. The gut. It just keeps happening. He draws his sidearm in order to commit suicide. He puts the barrel to his temple and then...the sniper clips his elbow and makes him drop the gun! And then, AND THEN, Feng runs over to rescue him, picks him up, and he gets shot a few more times before Feng throws him to the ground! It was like a Naked Gun bit!

Adam: I thought for sure they were firing all their ammunition at that tree because they were going to put the commander out of his misery with death by “TIMBER!!!!”

Rob: But more importantly: What was with the wolf ambush? During a training exercise, our boys are ambushed by ten or twelve CGI wolves, whom they fight off with bayonets and flares and all other manner of awesome tactics. This incident is never commented on again. Did I look at my phone for a second and miss something important?

Adam: That sequence took a lot of courage to include. The wolves look like leftover vfx from Van Helsing and this is 11 years after that film was released. I have no clue how those guys survived THAT MANY wolves. Then again, they are wolf warriors. It was pretty funny after a while how invincible our heroes were in a fight they should clearly lose. What did you think of Leng Feng’s perspiration? I thought it was a tad excessive. There was a moment when Yu Nan watched him sleeping and he was sweating only from his shoulder which I didn’t think was possible.

Rob: The dude’s face is all chiseled right angles. The sweat was cascading pretty damn elegantly. Do you think he and Long Xiaoyun (the flirty lady officer) are still together in Wolf Warrior 2? I’ve never seen it, but I obviously plan on it. 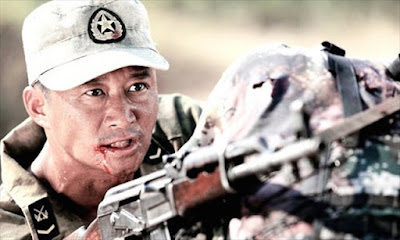 Adam: I don’t want to spoil anything, but looking at the cast list of Wolf Warrior 2 might have the answer to that question. I want to watch the sequel too. Do you have any other Scott Adkins recommendations? I’ve been meaning to watch Triple Threat, which has him, Tony Jaa, Michael Jai White, Tiger Chen, and Iko Uwais.

Rob: I really need to get up on my Adkins. I’ve seen a bunch of his supporting roles, and I remember watching Avengement last year and really enjoying it, but I’m hardly a completist. Wolf Warrior is a lot of fun, though! I think I’m gonna avoid looking at Part 2’s cast list so I don’t get spoiled. I hope the wolves come back.

We’ll be back next week to celebrate Lucio Fulci Day with Warriors of the Year 2072, which I chose because it sounds insane! Until next time…