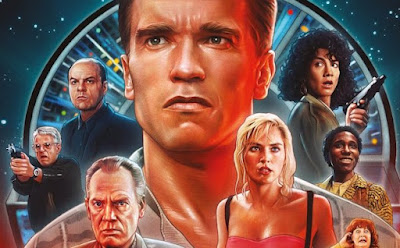 10 things about one of Arnie’s finest.

2. I wish Rekall existed, especially during 2020. I would have gone to Mars in a heartbeat.

3. Before I ever saw the movie on cable (or maybe VHS? I can’t remember), I was obsessed by some of the imagery and dialogue in the trailer. There used to be a trailer show on Cinemax (?) that played previews for current and upcoming releases. Throughout Spring and Summer 1990 I had a loop in my head of “Get ready for a surprise!,” Johnny Cab, Benny’s mutant arm, and “Consider that a divorce!” 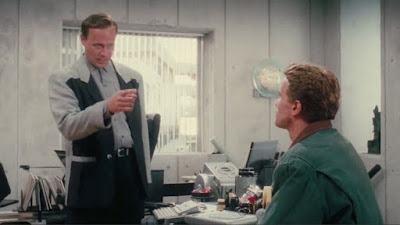 4. I go back and forth if I believe the whole movie was Quaid’s memory implant from Rekall or real. I’m sure this has been definitively answered somewhere already (maybe in the source material written by Phillip K. Dick) but I prefer the interpretation that it was all a dream. It feels more evocative and satisfying that way.

5. Arnold Schwarzenegger might be the best actor of all-time at delivering one-liners. He knows just the right timing and inflection. My favorite in Total Recall is when he shouts, “See you at the party, Richter!” at Michael Ironside. He sort of rushes the line, which is just the right way to go since Richter is falling to his demise. You want to make sure he hears it all of it, ya know? I pray that Schwarzenegger was at the premiere of Free Willy in 1993 and met that movie’s star Jason James Richter on the red carpet so he could have said to him “See you at the party, Richter.”

6. If I were Marshall Bell (who plays George/Kuato) I would be doing Kuato photo ops at conventions. It seems like a real missed opportunity if he’s not doing that already. 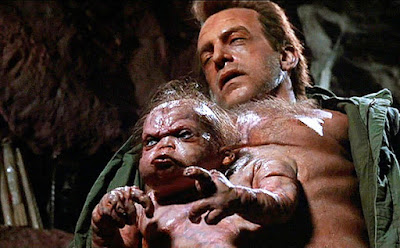 7. Venusville seems lame. If I had a gift card from there, I would probably be holding onto it for a long time. That place needs Kit from Pretty Woman.

8. I love love love the score by Jerry Goldsmith, especially the music for the main title (“The Dream”) and the theme he put together for when Arnold arrives in Venusville (“Mutant Dancing”).

9. I’ve never seen the Total Recall remake with Colin Farrell. Should I even bother?

10. I don’t know why but I remember that the night Total Recall opened in 1990 that I really wanted to go to the movies to see that or Back to the Future Part III, but instead I stayed home and watched the TV Movie Mother Goose Rock ‘n’ Rhyme on The Disney Channel, which starred Harry Anderson, Brian Bonsall, Bobby Brown, Shelley Duvall, Art Garfunkel, Terri Garr, Woody Harrelson, Debbie Harry, Cyndi Lauper, Cheech Marin, Howie Mandel, and a fucking terrifying Little Richard. This movie scared me at age 8 but I kept going back to watch it again and again whenever it was on TV. I kinda want to rewatch it right now. Is it available anywhere? (Checking) IT’S ON YOUTUBE!!!

See you next time when we gather back around the campfire to talk about another Carolco release!
Posted by Patrick Bromley at 5:00 AM